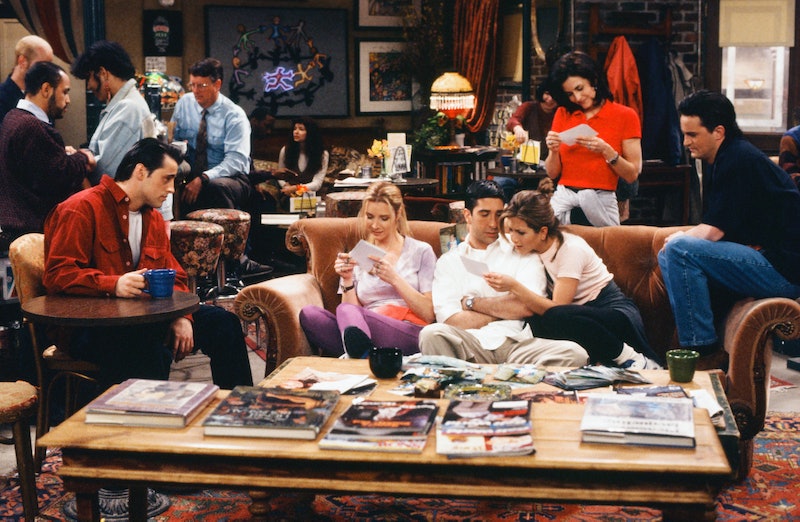 "So no one told you life was gonna be this way. Your job's a joke, you're broke, your love life's D.O.A." In the opinion of one Friends fan to another, those words are basically everything that is true in this world. And thanks to Friends, all of those things are totally okay, because all of the Ross, Rachel, Phoebe, Monica, Chandler, and Joey's of the world have and will go through those things and come out with limited bruises and scratches.

Sure, it might not be healthy to fall in love with a bunch of friends that you're not even actually friends with, but, when you're watching the show, it definitely doesn't feel like a one-sided relationship. With every dumb thing Joey says or every "I know!" Monica screeches or every bra that Rachel doesn't wear, fans of the show feel connected to this makeshift family that was able to survive for a decade. Well, over a decade if we're counting the gajillion of reruns that are on every night.

Now, Friends fans might not all agree on which of the six characters is their personal favorite — you can totally tell a lot about a person by how they rank them — but I think we can all agree that any time anyone insults Friends, we're all prepared to defend our favorite show until they back down or walk away because they think we're crazy. Here are just a few of the things that someone should avoid saying to a Friends fan:

1. Monica never could have afforded that apartment

IT WAS RENT CONTROLLED. Her grandma gave it to her...so... hah!

2. The laugh-track is nauseating

I'm sorry, but the laugh-track is basically the second soundtrack to Friends. Plus, it's totally allowed to be there because everything they say is laugh-worthy.

3. Shouting "Pivot" when you're trying to make fun of the show

We get it. You saw that one episode where Ross yells "pivot" over and over again. You're so clever.

4. Chandler's jokes are so stupid

Okay, you're being annoying now. Chandler's humor and jokingly-pathetic outlook on life is what makes him one of a kind. Every group of friends needs someone to make corny jokes.

5. I've only seen a few episodes, but I can tell I don't like it

If you've only seen a few episodes then how do you know you don't like it? Friends might be a sitcom, but you need to see more than a few episodes to really get the magic of the cast's chemistry.

6. How I Met Your Mother is basically like Friends

Are you crazy? HIMYM is a Friends wannabe. "Oh, look at us. We got five friends together instead of six and put them in a bar instead of a coffee shop." No one can recreate Friends. No one.

7. There's no way they could have hung out in that coffee shop all day

Listen, this one's harder to back up, but just be cool and don't spoil our fun. Although there is one episode where everyone's complaining about their bosses hating them, and Joey says something along the lines of, "Well, no wonder they hate you. You're sitting here at 11:30 in the morning on a Wednesday." Oh, Friends — you crack me up.