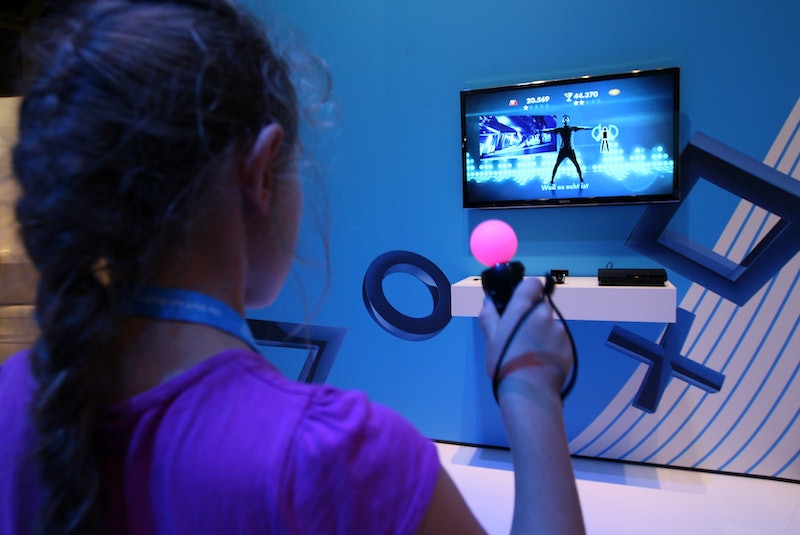 As some of you might know by now, I love playing games. This summer, I've had the pleasure of writing about why sexism is still a problem in gaming, as well as the top 5 female protagonists in games. As a lady gamer, I sometimes have people (mostly other gamers, and mostly men) say the silliest things to me whenever I bring up games I like to play. Here are a few of the most infuriating:

You bet your tiny genitals I'm pretty. Also, please explain the correlation between attractiveness and game-playing? I'm afraid I just don't understand (it must be that pesky femininity getting in the way). Is there some sort of looks threshold a girl must fall below to be able to play games?

Yeah, I do play Sims on occasion. But I play other games far more often. Also, why does gaming have to be inherently gendered? Sims is a reality simulation game, and although more women than men play it, it's not really marketed towards one gender or another. I know plenty of guys who love to tool around in their virtual neighborhoods for hours at a time.

3. "You're not a gamer if you haven't played Call of Duty/Grand Theft Auto/Halo."

Yeah, well, you probably haven't played Gone Home, so you can suck it. Also, just because I don't like games that are mostly shoot-'em-ups with a few story tidbits to tie everything together doesn't mean I don't appreciate games at all. And for the record? I have played Grand Theft Auto.

4. "When you say that you like games, do you mean that you just watch your boyfriend play?"

In my last relationship, I was always the one dragging him over to the couch so he could watch me play. ("Come on, just watch me do the first few minutes of Skyrim! You'll like it, I swear!") If all I got to do was watch men play games, I'd probably knock them over the heads with a two-by-four so I could steal the gaming console and get in some action myself. Watching is no fun!

5. "Which character did you choose as your romantic interest?"

This question is fine if we're having a comprehensive discussion of our character choices, but when you ask it straight out of the gate, it makes it sound as if you think I played for the romance alone. Look, if I wanted a romance story, I would have forked over $5 for a harlequin romance novel from Barnes & Noble, not spent $40 of my hard-earned cash on an AAA RPG.

6. "Why are you so upset that there's no female character to play? Just play as the dude."

Hey, it's totally cool if the game is story-driven and the protagonist of this specific story is male. (I've cited Bioshock: Infinite and Booker DeWitt as an example before.) But when that happens time and time again, it gets old. Mario is a dude. Ezio is a dude. Chris Redfield is a dude. Siegfried is a dude. Alan Wake is a dude. I could go on, but you probably get what I'm saying. There are a lot more male protagonists than female. Also, when players have the option to choose a male or female avatar, the vast majority will choose the male. In the Mass Effect franchise, only 18 percent of players pick a female character. That statistic is pretty depressing.

Well, you're an asshat, but that doesn't mean I'm going to go easy on you.

Cosplaying is so much fun for a lot of people, and I love seeing a particularly good one pop up in my newsfeed. But just because I am a girl doesn't mean that I'm going to cosplay. Why don't you cosplay, sir? Oh, that's right: because it's a highly specialized skill, not something a woman can naturally do just by being female.

Related: if you're a fan of Dr. Who, here are 8 things I hope no one ever says to you!

More like this
25 Inspiring Quotes From Black Women To Celebrate Black History Month
By Kyli Rodriguez-Cayro and JR Thorpe
Here's How Netflix Should Adapt Prince Harry's Memoir Into A Movie
By Ginny Hogan
Andie From 'How To Lose A Guy In 10 Days' Is A Total Gemini
By Nina Kahn
Kukulkan From 'Wakanda Forever' Has A Surprising Connection To Marvel History
By Grace Wehniainen
Get Even More From Bustle — Sign Up For The Newsletter
From hair trends to relationship advice, our daily newsletter has everything you need to sound like a person who’s on TikTok, even if you aren’t.