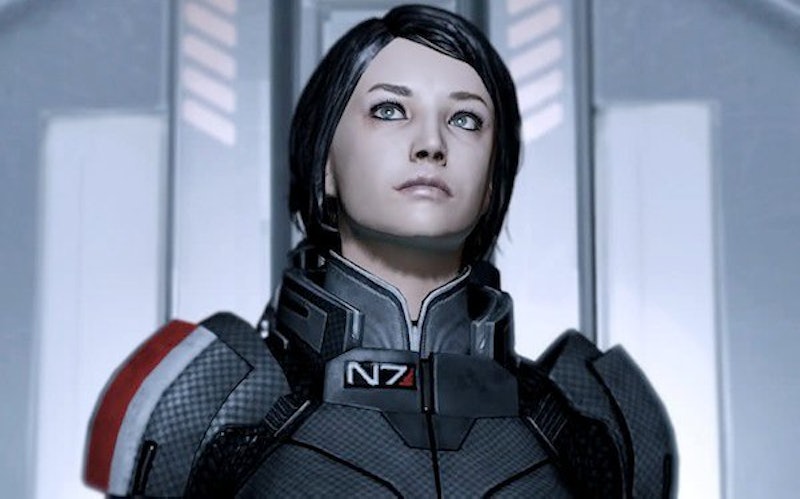 Alright, dear readers, I'm back to blab about video games some more. After I wrote an article about the unfortunate but unavoidable presence of sexism in gaming culture, I thought I'd put together a list of the top five kick-butt female characters that do exist in gaming — though I'm hoping that one day there will be too many to name. Whether you're a dedicated gamer or have never played a FPS in your life, here are some great characters to appreciate for their solid story development and non-sexist portrayal.

If you thought The Walking Dead was just a gore-filled show on AMC, think again. Telltale Games has created a game in the same universe as the show and the comic books, and it's a meditation on similar themes: that when catastrophes like the Walkers occur, it's not the dead, but the living, who represent the biggest danger. At the center of it all is Clementine, a young girl who grows up way too fast. As a kid, she is not, of course, sexualized — her notable lack of damsel-in-distress characteristics is not why she ended up here. Rather, I put her on this list because, as a young, female, African-American character, she is unlike so many other protagonists. No video game will have you tearing up and making excuses about your "seasonal allergies" like this one. Whatever choices you make within the game, you'll grow to love Clem (and her blood-spattered baseball cap) and root for her as she matures in a world full of shambling undead.

Gone Home is an indie game that made it huge last year because of its interactive fiction setup and fascinating character development. You play as Kaitlin Greenbriar, a college student who's gotten home from a year abroad to find her family's new home deserted. As you explore the empty house, you unravel the story of her sister, Samantha. You never see Sam, but through recorded journal entries, you piece together her experiences as a lesbian teenager in the 1990s, reveling in the Riot Grrrl movement and trying to figure out how to balance her parents' expectations with who she is. Fewer stories feel more real.

I'd be remiss in my duties if I didn't mention Samus Aran, one of the first female protagonists ever developed in a video game. She made her debut in 1986 as a bounty hunter roaming the planet Zebes, taking out Space Pirates on a crucial mission for the Galactic Federation. You'd hardly know that Samus was a woman, though, because she wears a suit of armor that obscures her form completely. In fact, discovering her gender is an Easter egg rather than a plot point: in three of the game's five endings, Samus appears without her suit, revealing that you've been playing as a woman all along. Samus has gone on to become a symbol for gender parity in gaming.

Commander Shepard is different from all the other characters on this list, since you can choose to play the protagonist of this series as either a man or a woman. However, playing the female version (affectionately dubbed FemShep by the gamer community) is infinitely more satisfying. Jennifer Hale's voice acting brings this character alive, even though a paltry 18 percent of gamers have experienced it (most choose DudeShep). In keeping with her strong leadership abilities and species-transcending charisma, Shepard is not hyper-sexualized: she always wears armor that completely covers her body. Since this is a role-playing game, Bioware provides several different personality types to develop, but all are detailed and intriguing. And, to provide the proverbial cherry on top, the finale of FemShep's story is so beautifully crafted that I had a nosebleed at the end of Mass Effect 3 from sobbing so hard. (Bite me, OK? It's so sad.)

In Gamesradar's list of the best games of all time, Portal was listed as number one. "Much would need to change for Portal to no longer be...[the] best game ever," they wrote. Likewise, much would have to change for Chell to no longer be the best female ever written. This may be a surprising statement, given that you probably don't know you're playing as a woman. (Did you even know her name was Chell? Didn't think so.) As with Samus, that's the point. The allure of Portal is that the you get to craft the back story and character details yourself, since you'll get practically none while you're playing. In fact, you'll only notice that the avatar you're controlling is female if you shoot your portals the right way. In images released by Valve, the company behind Portal, Chell is depicted as...wait for it...a totally normal-looking woman. No balloon boobs, no blowout hairstyle, no flashy outfit. She's there to get the heck out of Aperture Laboratories, appearances be damned.

If you're still jonesing for more great female characters, check out these 25 from childhood literature, and these 11 novels that would have been better with a female protagonist.

More like this
Mel B Thinks These Celebs Should Play Them In A Spice Girls Movie
By Alyssa Lapid
Hilary Duff Is “Optimistic” About A 'Lizzie McGuire' Reboot
By Alyssa Lapid
This 'Gossip Girl' Wardrobe Error Has Gone Viral On TikTok
By Alyssa Lapid
'Friends' Star Maggie Wheeler Offers Support To Matthew Perry After Reading His Memoir
By Alyssa Lapid
Get Even More From Bustle — Sign Up For The Newsletter
From hair trends to relationship advice, our daily newsletter has everything you need to sound like a person who’s on TikTok, even if you aren’t.