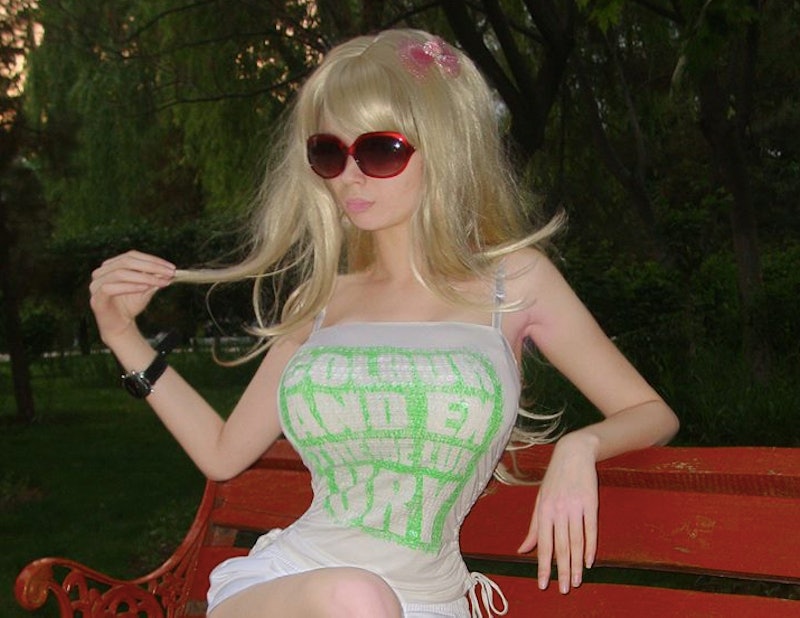 Another day, another human barbie (sigh). First there was Valeria Lukyanova with her cringe-worthy comments in GQ magazine. Next came Alina Kovalevskaya, another young human barbie from Ukraine. But the real life Barbie bandwagon doesn't seem to be stopping anytime soon. According to The Gloss, the latest teenager to hit the craze is 16-year-old human barbie Lolita Richi... who claims to be completely surgery free. After seeing pictures of 5'4" Richi with her 20 inch waist and 32F cup size it's hard to believe that her body never went under the knife — but she's standing by her story.

Even though she's not the first human barbie, she certainly believes she's the best one out there. According to Daily Mail, "I think I've achieved this image better than anyone else. I'm the ultimate vamp woman. I haven't even heard of Valeria Lukyanov," Richi said. (Oooh. Barbie burn). Oh, and don't worry! Her parents are completely on board with this whole obsession. Her mother takes all of Richi's photographs, according to Daily Mail.

And not only is she surgery free, but she also alleges to achieving her slender waist and figure without any dieting. "I have a gorgeous figure so I don't even have to diet. I just eat whatever's available in the fridge whether that's sausages or fruit," Richi said.

According to Daily Mail, Richi's Barbie-esque look started about a year ago because she believes all women should be immaculate and well kept and this was her way of achieving her best look. Her doll-like appearance comes from makeup, cheap contact lenses, costumes, and wigs she gets from her mother's acting days. It's hard to say whether Richi is in search of her very own Ken to live happily ever after with in Barbie's dream house, but she is certain about the type of man she is interested in.

"I want to be with a really manly man who is polite, sensible and who doesn't run away from problems. He also needs to have a full head of hair. I don't like bald men," Richi said in a Daily Mail interview. Sorry to all the bald headed men out there, but you aren't cut out for Richi. She's just a Barbie girl living in a Barbie world.

More like this
Confused About Blush Placement? This TikTok Makeup Hack Will Help
By Olivia Rose Ferreiro
The Pros & Cons Of The "Moisture Sandwich" Trend, Explained By Derms
By Olivia Rose Ferreiro
Why TikTok Is Flooded With Controversial Videos About "Pick Me Girls"
By Courtney Young
This TikTok Song About An Unrequited Romance Has FYPs In Shambles
By Emma Carey
Get Even More From Bustle — Sign Up For The Newsletter