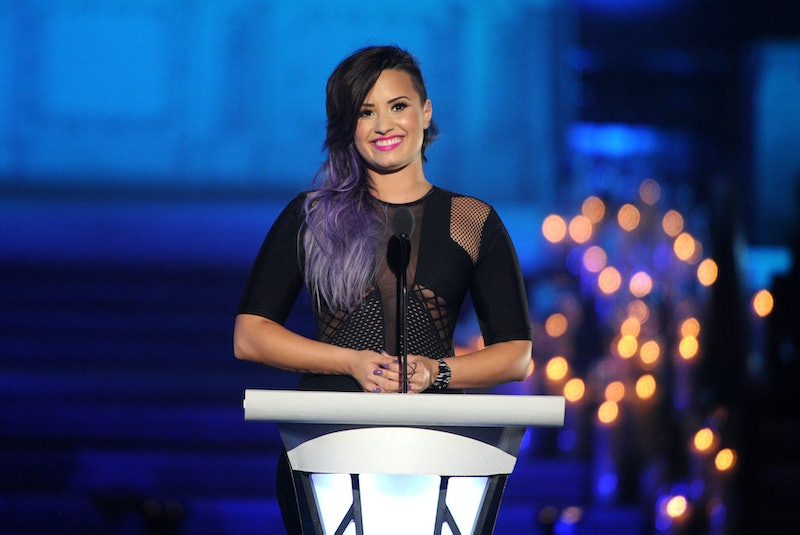 No disrespect to Jennifer Lawrence and Anna Kendrick, but if I had to pick a celebrity BFF, I would definitely pick Demi Lovato. And why not? The girl is pretty much amazing. The former Disney star may have risen to fame with the tween-targeted TV movie Camp Rock and hit show Sonny With a Chance, but she didn't settle with the title of former tween princess — she's grown into her own and now has the career that she has always wanted. The singer/actress is completely in charge of her own path, and though this star has had her fair share of challenges in the past few years — she has publicly discussed her own struggle with mental illness — she has also become a source of inspiration for young girls everywhere.

That's not to mention the fact that she's an all around talent and has amazing hair game 24/7. My fantasy BFF just turned 22, and it's the perfect time to celebrate all of the reasons why this star rocks on so many levels. In honor of Demi's 22nd birthday, check out 22 of Demi Lovato's best moments — I guarantee that there's even more where these came from.

The Moment We Realized This Girl Had Killer Pipes

Sure, this movie may be the height of cheese, but you have to admit that this song is pretty damn catchy. Plus, oh my God, Demi's voice. Amazing.

I was all about this song once upon a time, and I am still very much about Demi's bangs. This song may be from Demi's Disney days, but it's also one of the few numbers that I think she could still relate strongly to. Positive body image? Breaking the mold? So very Demi.

Demi and Selena may have had a relatively rocky friendship, but these videos — from back when they were Disney Channel newbies — are still adorable.

Mainly because it's really, really cute.

Months after seeking treatment for mental health issues including self-harm and bulimia, Demi opened up to 20/20 in one of her most honest interviews where she stated her commitment to getting well.

Demi described working on her third studio album as a "therapeutic" experience, which it's listeners might agree with — it featured the power ballad "Skyscraper," a.k.a. the perfect song for when you need to feel unstoppable.

In a radio interview, Demi explained the significance behind her wrist tattoos, stating:

"When I got out of rehab that’s the first thing that I did is I went and got tattooed ‘Stay Strong’ because a lot of fans were telling me that and it helped me get through a rough period, so anytime that I would feel triggered to either self-harm or act out in an unhealthy behavior, I could look down at that and stay strong."

...And Her Book of the Same Name

The book features 365 days of hopes, personal goals, and quotes to inspire readers to live their healthiest life.

Yes, Demi looks flawless with or without makeup (those eyebrows are perfect) but she really did spearhead the whole "makeup free" celebrity selfie.

Oh, and THIS hair.

And we can't forget this hair look.

She does blonde so well.

Her Guest Role On Glee

Demi's self-proclaimed "sapphic Goddess" Dani almost made me forget that Brittana was supposed to be endgame.

Because all of her scenes with Simon are just the best.

Never not on point.

Everything About "Heart Attack"

If this song wasn't stuck in your head for months, you're probably not human.

I so wanted to invest in glow in the dark makeup after watching this music video.

Demi's been committed to fedoras since her Camp Rock days, and she totally rocks it.

And, Finally, The Time She Proclaimed Her Love For Her Fans

Happy 22nd birthday, Demi! We love you right back.