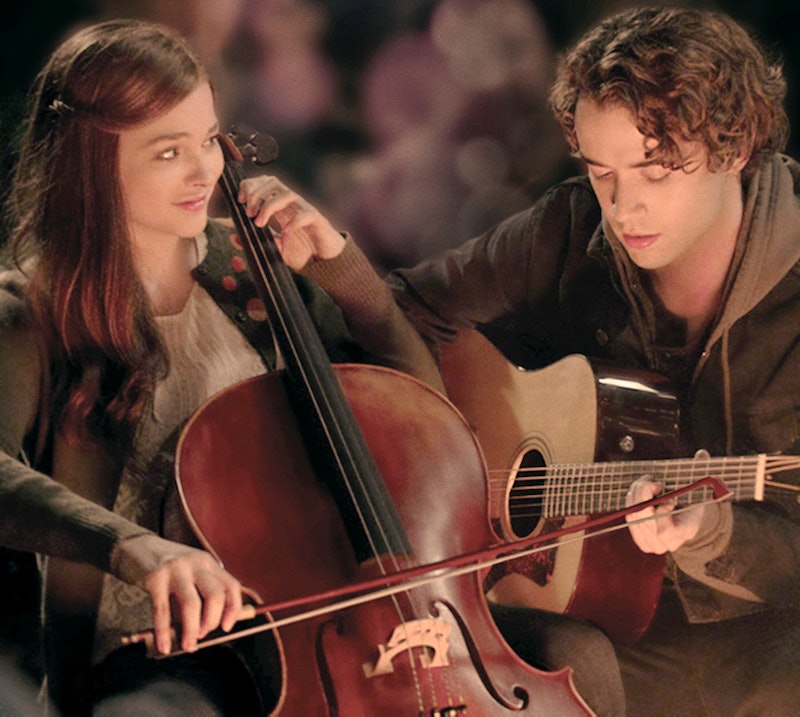 There's a new young adult phenomenon that's about to take our culture by storm and make audiences sob uncontrollably in a movie theater, and that is the new film adaption of Gayle Forman's 2009 novel If I Stay . If I Stay hits theaters on Aug. 22, but the film has been anticipated long before its release date. The movie, which is about a teenage girl named Mia who must make the choice between life and death after a car crash, already has a huge fan following, and with the release of the film we can expect even more people to get onboard the If I Stay bandwagon. One way the film is hyping people up for it is by releasing music from the movie, including songs from Mia's boyfriend Adam's band, Willamette Stone. Willamette Stone already has several songs available on the If I Stay soundtrack, which is odd given that Willamette Stone is a seemingly fictional band. So what's going on there? Is Willamette Stone a real band? Wait, is Shooting Star a real band? Here's what you need to know.

In the novel, Mia's boyfriend Adam is a member of band Shooting Star, which has been renamed for the film as Willamette Stone, most likely a reference to Willamette Stone State Heritage Site, which is a landmark in Portland, Oregon where the film was set. (It was shot in Vancouver.) Willamette Stone may be a creation of the author and filmmakers, but the music that this "band" produced is quite real.

Actor Jamie Blackley, who plays Adam in the film, recorded the music for Willamette Stone. Prior to the soundtrack's release the If I Stay Facebook page let fans vote for which of the four songs they wanted to be released in full online. Fans chose "Heart Like Yours," the song which Adam plays for Mia in her hospital bed. (Cue the swooning, please.)

All of the music from Willamette Stone has been written specifically for If I Stay, which means that we won't be seeing a Willamette Stone concert series any time soon. One person that we should keep our eye on from the fictional Willamette Stone is actor/musician Blackley. He may be in a band on screen now, but it wouldn't surprise me to see him turn his fictional music career into a real one when he's not acting as the adorable love interest to Chloe Grace Moretz. You can listen to "Heart Like Yours" below and see why.

More like this
This James Bond Event At Abbey Road Studios Was A 007 Fan's Dream
By Samantha Rollins
The 'Love, Lizzo' Harry Styles Scene Is Just 1 Moment That Made Fans Feel Seen
By Brad Witter
Letitia Wright's Aisha Encourages A Vital Conversation Around Immigration
By Maxine Harrison
Haim Reacts To Stevie Nicks Wanting To Sing Their Song To Christine McVie
By Radhika Menon
Get Even More From Bustle — Sign Up For The Newsletter