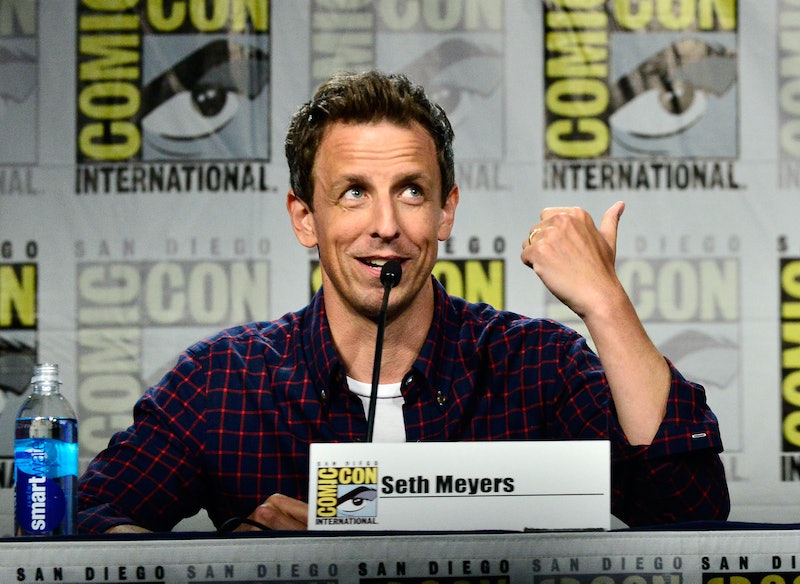 Seth Meyers, host of Late Night with Seth Meyers, is on hiatus for a week to prepare for the 66th Annual Primetime Emmy Awards, which he will be hosting. He took a break from prepping for this very stressful event by taking on another stressful event. Seth Meyers had a Reddit AMA on Wednesday afternoon. Sifting through hundreds of questions about his time on Saturday Night Live and his latest gig, Meyers gave us a glimpse into his life as a late night host and as a married man. Find out what it takes to be a successful comedy writer (or, something like that), ahead!

tajmaballer: Best perk of hosting Late Night?Seth_Meyers: A dressing room with my own bathroom.

NapsAndNetflix: Seth, when asked who my celebrity crush is I always answer with you. I am a straight 20 year old male. Now that that is out in the open, what was the biggest change from moving from snl to your own talk show?Seth_Meyers: Thank you! I'm flattered. Doing a show every day versus once a week. The upside is, when something doesn't work we get to go back out there 24 hours later as opposed to having to sit with it for seven days.

... Although he doesn't think he'll be asked back to Studio 8H anytime soon

TwistedXPoison: Will you be coming back to host SNL anytime soon?Seth_Meyers: Ha! I doubt it!

GO_riboflavin: Do you ever feel bad about making fun of people? Big fan, thanks.Seth_Meyers: I try hard not to tell any jokes that, were I to see the person I told them about, I wouldn't feel so bad that I couldn't say hello. There are very few I'd take back

Ascertain20: Do you clear stories you're going to tell on the show with people before you tell them?Seth_Meyers: I don't. Eventually I'll get in trouble but so far, so good!

On his relationship status

MyPrettyPower: Bill Hader said "All of them. Every. Single. One. Of. Them." in response to "favorite sweet?". What's yours?Seth_Meyers: Don't love sweets. That's why Hader and I get along so well. No competition!

miatova: Hey Seth! Do you have any idea when you're going to get to do Second Chance Theatre on Late Night again? Jennjamin was so funny and I would love to see something like that again. Any idea when it's coming?Seth_Meyers: Hoping September!

milkymaniac: When will we see another "Second Chance Theater"? I loved that bit!Seth_Meyers: We have another one locked and loaded. Hoping to announce soon. But it's a good one!

On Starting Out in Comedy

aejohnson9: Hey Seth, Any advice for aspiring TV screenwriters? What's the best route to get into entertainment writing? Is being in a comedy troupe particularly important? can online journalism suffice?Seth_Meyers: I think there are more ways than ever to find a job in the entertainment industry. The best advice I would give is to create as much content you're proud of as possible. So if the day comes when somebody wants to see your stuff, it's ready to go

Karlybitme47: ... Okay so here is my question: what advice would you give someone like me who dreams of making people laugh for a living? You are such a huge inspiration to me, and your advice would mean the world. Thank you so much!Seth_Meyers: Here's my advice: Get out when you're young and perform as much as possible. This is the time to find your voice. A lot of the finding will come in the failing but that's OK. You'll be fine!

On where he gets inspiration for The Awesomes (or, how he let his love of comic books shine)

Sakura_7: Why is the Blue Beetle your favorite superhero?, mine is Booster Gold.Seth_Meyers: I loved Justice League International when it first started. Good stories with comic relief. Blue Beetle and Booster were always my favorite but I liked Blue Beetle because he was smarter

unicorn928: What is your favorite comic book?Seth_Meyers: Locke and Key is my most recent fav

Finally, on his relationship with Chevy Chase

Psychofant: Has Chevy Chase ever told you that you're not?Seth_Meyers: He's implied it