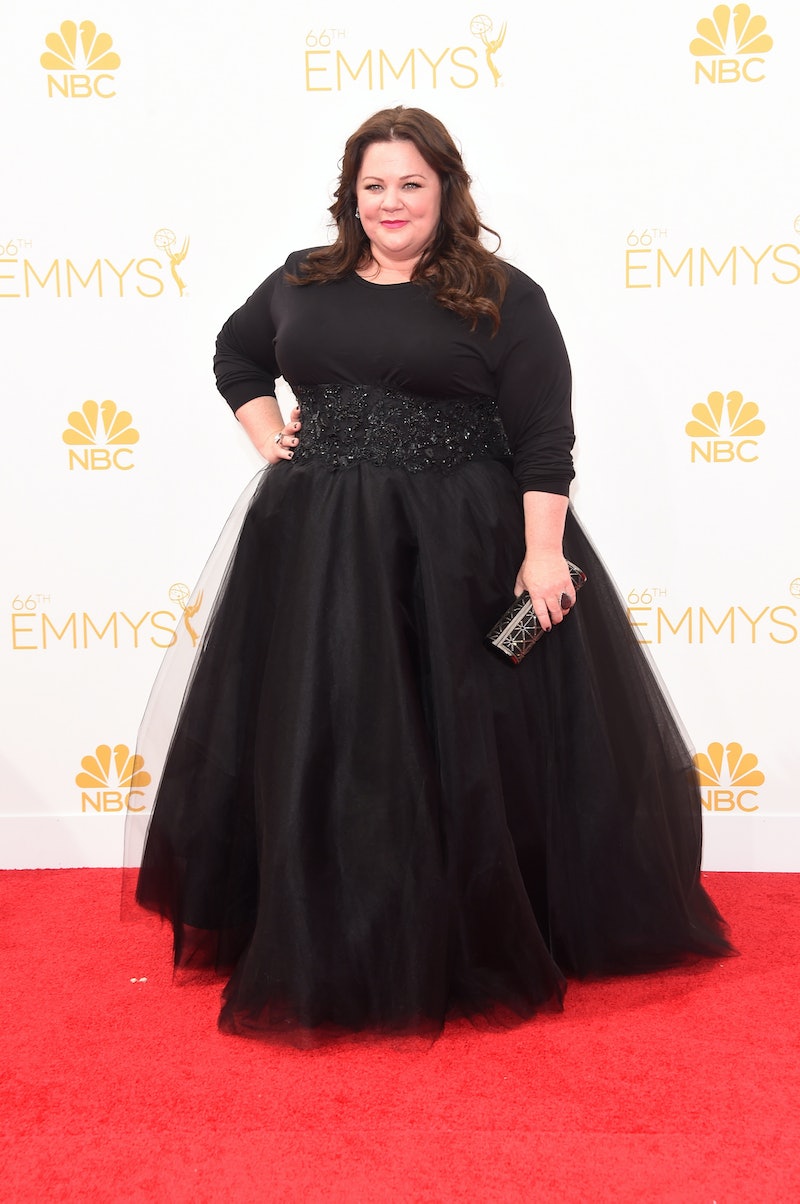 Melissa McCarthy, the go-for-broke, Oscar-nominated star of Bridesmaids, hosted SNL for the third time last night with musical guest Imagine Dragons. McCarthy didn’t have a project to promote (unless you count Mike & Molly…please don’t count Mike & Molly), she was just there because she’s been really good at hosting the show in the past (garnering two Emmy nominations). “What better way to send off Weekend Update anchor and head writer Seth Meyers?” I thought. (Meyers is leaving the show to become the new host of Late Night on NBC.)

Fortunately, we did get to say a proper goodbye to Meyers during Weekend Update. Unfortunately, last night was McCarthy’s weakest SNL showing to date. It wasn’t terrible — just kind of unremarkable. Outside of her opening monologue, where she fought Bobby Moynihan while suspended in midair a la Crouching Tiger, Hidden Dragon, not enough sketches made use of McCarthy’s hilarious physical antics (like this brilliant 2011 “Lulu Diamonds” sketch where she keeps falling down the stairs — I could watch it for forever). If I were McCarthy, I wouldn’t count on an Emmy nomination this time around.

Musical guest Imagine Dragons did a similarly decent job. To start, the band performed their Grammy Award–winning hit, “Radioactive,” with special guest rapper Kendrick Lamar. It was essentially a toned-down version of the group’s Grammy night performance, and while it was OK, it was nothing to write home about. (Sadly, Lamar went home empty-handed on Grammy night.) Next up, the band played their current single, “Demons.” They sounded good, but visually, the performance wasn’t very interesting to watch. Except — has anyone else noticed that lead singer Dan Reynolds looks like he has no teeth when he sings? Eerie.

In this ridiculous sketch, SNL lampoons Staten Island congressman Michael Grimm, who was recently caught on camera threatening to throw a reporter off a balcony for asking an off-topic question. McCarthy reprises her role as Sheila Kelly, the out-of-control women’s basketball coach from Middle Delaware State — only now, she’s somehow managed to bully her way into congress. When a meek reporter (John Milhiser) confronts Kelly about allegations of illegal fundraising, she loses it, threatening to throw him out a window. When she realizes that the news camera is still rolling, she rips it off its tripod in a Hulk-like rage, screaming, “I am freshman congresswoman Sheila Kelly and I am invincible!” The sketch ends with McCarthy beating up two cops and stealing their car, yelling out the window, “I’m gonna live forever!” Yeah, it’s insane, but McCarthy pulls it off.

It’s only fitting that Seth Meyer’s last night behind the Weekend Update desk features some of the best news story punchlines in weeks! But the highlight here is when Bill Hader comes out as Stefon to wish his friend (and husband) good luck in his new endeavor (Amy Poehler, Andy Samberg, and Fred Armisen make appearances as well). Never one for predictability, Stefon starts things off by dropping an out-of-left-field tantric sex joke, calling Meyers “the Sting of SNL” because it takes him “12 years to finish.” Later, when Cecily Strong tries to tell Meyers that she’s going to miss working with him, Stefon shouts, “YOU BARELY KNOW HIM!!” and hisses at her like a cat. Ah, Stefon, never change. The sketch wraps up with a heartfelt thank you and goodbye from Meyers, and everyone seems to be holding back tears. Aww. Head writer Colin Jost will replace Meyers on Weekend Update starting March 1.

This phony commercial is dedicated to the guys who can never seem to remember Valentine’s Day…until they’re at CVS buying deodorant and tortilla chips. Suggested CVS Valentine’s Day gifts include: a stuffed bear dressed as a bee with stickers on it that say, “Bee Mine,” G-rated CVS brand sex dice, and a giant Mylar balloon that sings “Mambo No. 5” whenever you touch it…or even when you don’t! When Moynihan presents girlfriend Aidy Bryant with her gift — a Christmas stocking that was on clearance — her response is perfect: “You have hurt me today.”

Normally, I love this sketch that stars Bryant and Strong as Morgan and Kyra, two mismatched best friends, but something about the addition of McCarthy really throws off their flow. This week, we finally get to meet Donna Ruth Baker (McCarthy), the middle-aged divorcee that Morgan spends so much time hanging out with. When the topic of the talk show turns to dating and sex, Bryant has a few good lines as the prudish Morgan (“I’m dating the woman I’m becoming and I love every moment with her!”), but McCarthy’s predictable “dirty old lady” routine is pretty played out.

It’s funny how the worst sketches tend to have the hardest premises to describe. “OK, so new cast member Kyle Mooney is an art gallery tour guide, right? And he’s giving a tour of living art exhibits. Nasim Pedrad is posing as famous Mexican painter Frida Kahlo in this living art exhibit, OK? And then McCarthy comes out as this loudmouth maintenance worker who’s trying to fix the gallery’s Internet connection and she keeps interrupting the tour and she won’t stop name-dropping her manager, Danny Tranz! Get it??” Err, no. The sketch lasts an eternity — I grew and shaved several long, gray beards before it was finished. The only silver lining here is that we’re given a rare glimpse of new cast member Brooks Wheelan. Naturally, he has no lines.

That’s all for this week! Due to the 2014 Winter Olympics on NBC, SNL won’t be back with new episodes until March 1. Bummer. Try not to miss me too much, OK?

More like this
Kanye West Has The Most Kanye Reaction To Kim Kardashian & Pete Davidson's Split
By Jake Viswanath
Kim Kardashian & Pete Davidson Reportedly Broke Up After Dating For 10 Months
By Grace Wehniainen
17 Years Ago, 'Hannah Montana' Reportedly Almost Cast This 'Gossip Girl' Star
By Grace Wehniainen
At 14, Tatiana Maslany Was Obsessing Over Tamagotchis & The Spice Girls
By Gabrielle Bondi
Get Even More From Bustle — Sign Up For The Newsletter