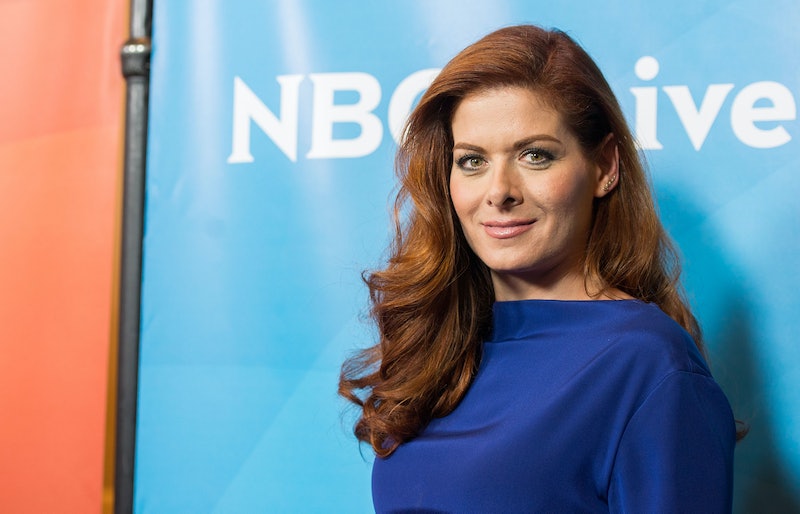 Debra Messing is coming back to the small screen this fall on NBC's new comedy, The Mysteries of Laura, which stars Messing as detective Laura Diamond on the New York homicide squad. And, oh yeah, she's the mother of two twin boys, who, according to the official show poster, are super naughty. The poster boasts the tagline: "Catching bad guys. Raising naughty ones." It'd be a fairly innocuous poster for another "can she have it all" story on primetime, but there's one disturbing factor: the promotional image features Messing smiling in the middle, flanked on one side by her screwball family — her ex-husband and two twins, all white. And on the other, her partner cuffing a faceless criminal with his back turned to the camera. Both her partner and the criminal are people of color. It's a pretty obvious divide, and it speaks to the ever-obvious lack of diversity on television.

It is encouraging, on the one hand, that The Mysteries of Laura stars Laz Alonso, a man of color, as Messing's partner cop. The show also includes Janina Gavankar, the Indian-American actress from The L Word and True Blood, as another detective on the police squad. While these two cast members who are people of color is a plus, the poster itself undoes that work. Why does the faceless criminal HAVE to be a dark-skinned man? Would it have taken away from the effect were he white? If you were to imagine the show cast with a woman of color as the lead with a family that was all people of color, and the criminal was white, would that be too far-fetched for the audience? There's only speculation regarding those questions, but to date, there have been no network comedies that fit that criteria and follow this particular storyline: the career woman who is trying to balance work and life and all the antics that ensue.

Not to say that Messing is a bad choice for the title role; she's charming and talented, and Grace from Will and Grace was an iconic character due to her quirkiness. But the poster is especially upsetting amidst the news of the shooting of Michael Brown by white police officer Darren Wilson. To imply with the poster that face of crime in America can only be a face of a person of color is a dangerous move, and yet, that's what The Mysteries of Laura seems to say, even before the show has aired.

Is this nitpicking? No; even a subtle choice like casting a criminal who is not white speaks to the inherent whiteness of television today. According to the poster, the cuffed man represents the "bad," while the raucous twin boys are innocuously naughty. That's a major divide. The Mysteries of Laura seems like it will be just another show showing the "healthy" struggles of a white family while perpetuating that the face of crime is not white.

Regardless of whether or not The Mysteries of Laura winds up being successful, this first look indicates that it might be just more of the same, and I wouldn't be surprised if many of the criminals on the show are people of color. I'm keeping my hopes up, though, that Laz Alonso and Janina Gavankar will provide strong performances to boost the show's diversity.

More like this
How Getting An Abortion Has Changed From The ’60s Through Today
By Amanda Chatel
Why You're Seeing Green Bandanas At Abortion Rights Protests
By Lexi Inks
The Most Powerful Photos From The Weekend’s Abortion Rights Protests
By Melanie Mignucci
Adele’s All-Female Lineup Includes Kacey Musgraves, Mahalia, & Self Esteem
By Shahed Ezaydi
Get Even More From Bustle — Sign Up For The Newsletter