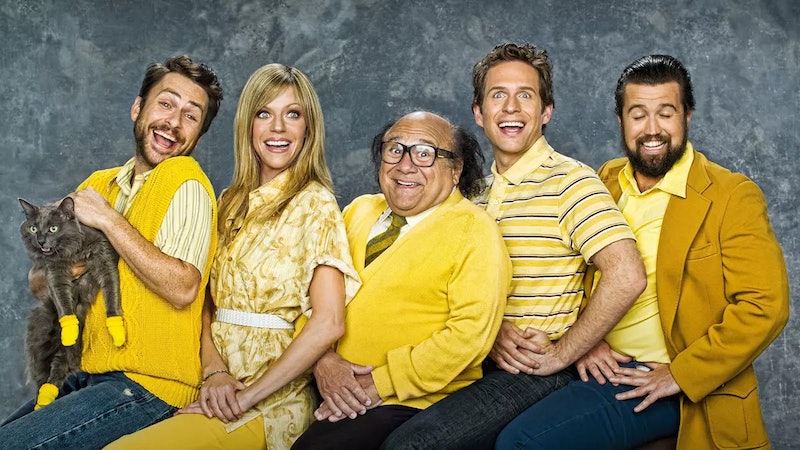 If you're getting tired of the shallow jerks littering summer reality television, and are ready to move on to their less glam scripted fall counterparts you're going to have to wait a while. The resident jerks at Paddy's Pub won't return for bit, as It's Always Sunny Season 10 premieres in January 2015. So why the delay for a show that usually hits screens in the fall? As Deadline reports, the Always Sunny gang's premiere is delayed so that FXX can pair it with the premiere of a brand new series from creators Rob McElhenney, Charlie Day, and Glen Howerton. The the Tracy Morgan-starrer was created in collaboration with Luvh Rakhe, a former writer on the show and current New Girl scribe (sharing a writer might explain why New Girl and Sunny are bizzaro world versions of each other). So the gang will just have to see you later, boners.

As obsessive fans know, the "terrible yet funny" characters have a vibe that's both akin to Seinfeld and the British version of The Office, while indulging in a lot of the wacky sitcom conventions of its fellow comedies. It's truly a smart show developed by and made for people who love television, which something it doesn't get credit for often enough.

So what have you missed all last season? In addition to the usual debauchery, Lethal Weapon remakes, and messing with The Waitress, Season 9 had some truly brilliant gems, including a sweeping statement on awards season (are you listening, Emmys voters?). Here are some of Season 9's smartest moments:

The Time They "Broke Dee"

Kaitlin Olson's Sweet Dee is one of the most complex characters on television in general, but especially for female characters who aren't as often allowed to revel in their awfulness. Further, Olson is an incredibly gifted physical comedian; watching her gag through a standup set is one of TV's great disgusting joys. That's why last season's Dee-centered episode was such a delight. The gang realizes after all of their abuse Dee has fallen into a deep depression, and they decide to cheer her up by supporting her comedy career. Make no mistake, being just as awful as they are, Dee is quickly ready to abandon them at the first sign of success. Even though the rug gets pulled out from under her, the real multilayered joy is how Dennis is "broken" by episode's end.

They All Try to Win An Award

In a brilliant send-up of the show's popular viewership but lack of critical success, the bar tries to win an award. They visit a cool award winning bar, only to be shocked by the lighting, plastic attempts at diversity, and manufactured banter — clearly, the entire set-up is a nod at traditional sitcoms. The bell this new bar rings to get everyone to drink is an obvious nod to laugh tracks. ("I'll drink when I want to!" the Gang derides.) They make some great points about TV shows, like women being cast just to be cute, with Dennis remarking "if she can tell a joke, well that's a bonus." The gang tries to change their bar only to transform it into a grotesque display, while making more commentary on their industry, with great lines like "Black bars don't win awards. I don't know why, they just don't." With an episode this smart, it's a shame to think the gang has never been recognized by the Academy before.

Sean Williams Scott dropped by to fill in as "Country Mac," Mac's rural cousin who was just a little bit better at being Mac: good at martial arts, with a low key wisdom, and also completely unconfused about his sexuality. While Country Mac meets an unfortunate end, he's a delightful reminder of everything Mac wishes he was. And yeah, the whole episode was pretty darn smart.

More like this
The 'Firefly Lane' Book Ending Teases Way More Tears To Come In 2023
By K.W. Colyard
This 'White Lotus' Symbol Could Hint At A Major Character's Death
By Grace Wehniainen
Everything To Know About 'The Peripheral's Potential Season 2
By Brad Witter
Everything To Know About 'Firefly Lane' Season 2 Part 2
By Gretchen Smail
Get Even More From Bustle — Sign Up For The Newsletter