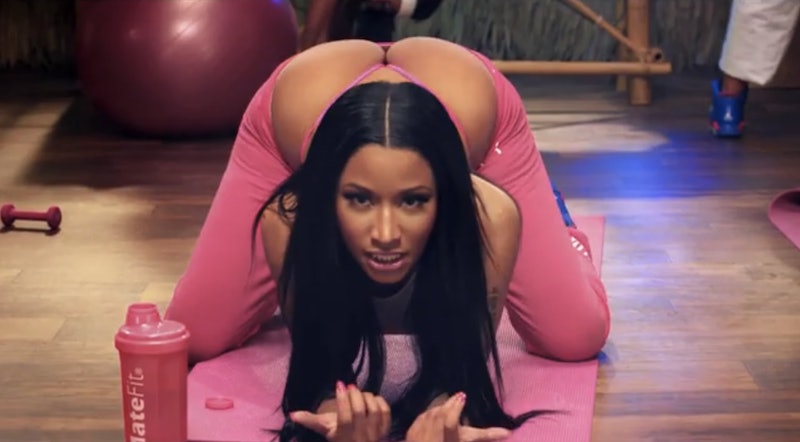 On Tuesday, after copious preliminary hype, Nicki Minaj's "Anaconda" video was finally released, and I, for one, am a big fan of the final product. I applaud Minaj's enthusiastic (and I mean realllllly enthusiastic) love of her own rump amid a culture that discourages women from taking up too much space. I like how she smartly samples from Sir Mixalot's "Baby Got Back," a song that majorly objectifies women and suggests they peddle their sexual wares in return for a "roll in my Mercedes," and reclaims it in order to create...well...a song that suggests women peddle their sexual wares in return for Balmain and Alexander McQueen. Shit. Forthcoming essay: Am I a bad feminist for liking majorly sexist music? Because I'd rather not have to take all the Minaj, Outkast, Odd Future, etc. off my "Get Swole At The Gym" playlist.

I'm going to choose to overlook the fact that Minaj is perpetuating an irritating trope about women trading sex for stuff, or at least rationalize it by saying that third-wave feminism decrees that women can do whatever the hell they want as long as they do so on their own terms. She's owning her curviness! She is owning her sexuality and the power it gives her! And she is doing so in a video that is largely devoid of the male gaze (as Kara Brown at Jezebel points out) — it's mostly just a bunch of super sexy women acting all sexy for their own benefit, not the benefit of male onlookers. As someone who sometimes twerks alone in her apartment to "Partition," I relate to this.

But for all the advanced feminism and fierce body love in Minaj's "Anaconda," there is a lyrical aspect that is distinctly problematic. Minaj is all about loving your body...if your body looks a lot like hers.

Much like Sir Mixalot likes "thick soul sisters" in lieu of "flat butts" and "knock-kneed bimbos," Minaj's man "don't like em boney" and "can tell [she] ain't missing no meals." Cool! Whatever you're into, man. I like tall, lanky guys who wear tight pants and look a little homeless, and maybe one day I'll write a song about that. But the issue comes in when Minaj relays her thoughts on women who are't quite as, um, gluteally gifted as she is. Check out this last verse:

And things were going so well Nicki! There you were, making all the big-bootied women of the world feel all powerful and sexy, becoming a new body-positivity icon for a few minutes! And then you had to go and make the "skinny bitches" of the world feel like they are lacking, like they don't deserve to share the dance floor with you (for the record, I don't deserve to share a dance floor with Nicki because my moves aren't sufficiently sweet, not because my butt is smaller than hers). Skinny people are people too, and the naturally thin among us aren't necessarily "missing meals" or devoid of sex appeal. Just because someone's body is the type that is typically prized by society doesn't mean that it's OK to talk smack about them in some sort of karmic retribution. Keep dancing, skinny bitches.

More like this
This TikTok Trend Will Help You Be Kinder To Yourself, Says Scarlett Moffatt
By Frances Stewart
I Have Eyebrow Alopecia – & Microblading Gave Me My Confidence Back
By Jessica Morgan
Adele’s All-Female Lineup Includes Kacey Musgraves, Mahalia, & Self Esteem
By Shahed Ezaydi
Nick Kyrgios & His Girlfriend Had A Rom-Com-Worthy Meet Cute
By El Hunt
Get Even More From Bustle — Sign Up For The Newsletter