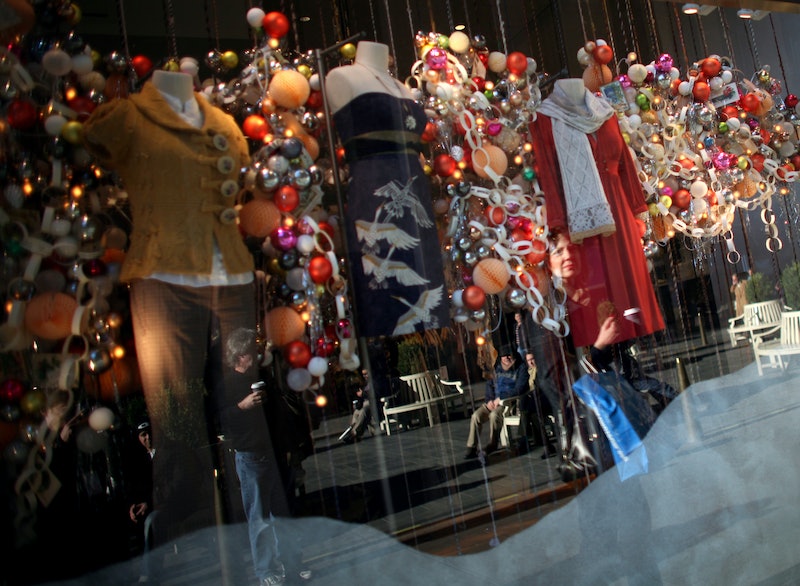 If there's any popular brand you could say is directly and successfully aimed at women, it's Anthropologie. Known for feminine silhouettes, dreamy prints, and gorgeous home goods, Anthropologie is many a girls dream shopping destination. However, the store may soon be losing some fans (and fast) after an Anthropologie manager reportedly directed a breastfeeding mother to move to the restroom with her infant, as to make customers in the store "more comfortable." Really.

According to Ingrid Weise Hesson, the (obviously) offended mother, she recently visited the Beverly Hills Anthropologie location on a shopping spree, intending to use a birthday discount. After spending a significant amount of money, Hesson took a seat towards the back of the store to breastfeed her infant son. That's when she was approached by the store manager.

"Imagine my surprise when the manager Meredith approached, 'I'm here to escort you to the ladies room where you can finish feeding your baby.' Shocked. I unlatched the infant, he began to cry, and we did the walk of shame to the stock room bathroom," Hesson said. "There was nothing but a toilet in the room. 'Sorry we don't have a chair.'"

An angered and embarrassed Hesson left the store soon after, and later called Meredith, the manager, to address the situation that had just transpired. When Meredith explained how she thought everyone in the store would be more comfortable if Hesson breastfed her child elsewhere, she used the rationale that the store "must be fair to all customers, not just moms." Strange logic to say the least.

Dissatisfied, Hesson then wrote an email to the company, and soon after posted it on her Facebook page. It only makes sense that the post has since spread rapidly around Twitter and other platforms, fueled by a shocked and offended response from not only mothers, but everyone.

Although this has only happened recently (in less than 24 hours, according to Ad Week), Anthropologie has already responded with a (brief) note on the encounter.

We are disappointed to hear of the unfortunate experience that occurred in our Beverly Hills store. As a company comprised of hundreds of mothers, which seeks to put the customer first, we celebrate women in all of their life stages.

While the brand does admit to their wrongdoing in the situation, they also refer later in the statement to the event as a "welcomed opportunity to enhance our customer experience." You welcome it, really? Come on, Anthropologie. You can do better than directly following a so so apology with a "in the end, we're going to benefit from this."

Anthropologie was not only offensive in its actions, but, as Hesson stated in her email, California grants mothers the right to breastfeed in public. So not only has the brand done something disrespectful to their core group of customres, but they also intruded on the legal rights of a shopper to feed her infant where she pleases.

While I'm sure we can all say that we hope the store does in fact learn from its mistake in this scenario, I think it's also fair to say that the brand can do better than a one-paragraph, lackluster apology. Here's hoping that in the next few days the store will make amends in a more heartfelt and serious manner.

More like this
The Most Powerful Photos From The Weekend’s Abortion Rights Protests
By Melanie Mignucci
42 Black Owned Fashion & Beauty Brands To Support Today & Always
By Mekita Rivas, Shea Simmons, Kui Mwai and Dominique Norman
23 Times Meghan Markle Dressed Just Like Princess Diana
By Bustle UK
The Families Of Grenfell Tower Are Still Waiting For Justice, Five Years On
By Bustle UK
Get Even More From Bustle — Sign Up For The Newsletter