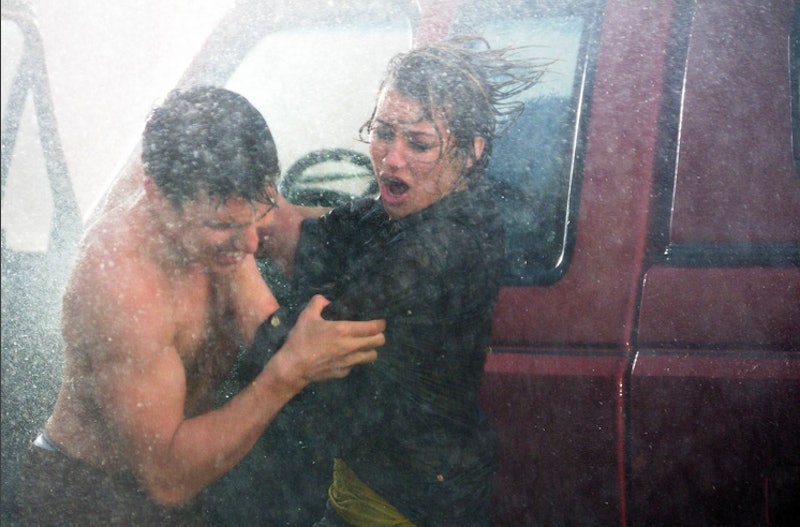 Okay I'm going to be honest here, when I heard about Lifetime's movie #PopFan and found out my boo (but he doesn't know it yet) Nolan Funk was set to star in it, I was immediately on board. Well played, Lifetime. Don't get me wrong, I'm excited about Chelsea Kane too. She starred in one of Disney Channel's worst series, Jonas L.A. (but it was secretly my favorite because Nick Jonas, duh), and she was on Season 12 of Dancing with the Stars with Mark Ballas. The movie is actually kind of a big deal to me. I'm also psyched because #PopFan is essentially a modern rework of Misery , one of my favorite Stephen King classics.

For those of you who have absolutely no idea what I'm rambling on about, first of all, for your own sanity, look up Nolan Funk's Instagram, and then we can talk. But the movie's plot is also exciting — almost as exciting as Funk's casting. When I first heard about the premise of #PopFan I thought to myself, this is gonna be good, but it also reminded me of how much I loved King's original. Here are some comparisons between the two. Let's see which one comes out on top.

King's Misery is about a famous author, Paul Sheldon, who gets into a car accident on the way to New York City. A blizzard derails him and he crashes, knocking himself unconscious. When he comes out of it, he's laying in a bed with two broken legs and an injured shoulder. Over him stands Annie Wilkes, his self-proclaimed number one fan, who has brought Sheldon to her secluded home. She's very fond of his romance novels starring a character named, you guessed it, Misery. When Annie reads Paul's latest book and doesn't like what Paul has done with her favorite character, things go a bit haywire.

With #PopFan, the story is very similar, except it's a little more modern. Lifetime describes the film as follows: "A young pop star looking to recreate herself and her sound on a quiet trip to Maine is caught in a storm, crashes her car, and rescued by a young man who takes her to his secluded lighthouse to recuperate. But she soon discovers that he is not just her rescuer, but a mentally unstable and obsessed fan who believes she is the image created in her videos."

Annie Wilkes. I've got three words for this lady: Drunk. In. Love. She's obsessed with Paul Sheldon, his character Misery, and she'll stop at NOTHING to get her way. (10/10 great villain)

Crazy Lighthouse Guy. I've got way more than three words for him but I'll keep it to six: Too. Hot. To. Be. A. Villain. I can't imagine Funk as an insane, deranged, overly obsessed fan, but I'll try to suspend my shock enough to allow it. 5/10, for now.

Paul Sheldon. The man is an incredible novelist and survived this:

Pop Star Diva Chick. I don't know much about her but she's holding a martini glass, wearing a super cute bandage dress, and out at a club so I like her already. 10/10 even before the movie.

SPOILER ALERT: Annie dies at the end of Misery, so we may see a death of Super Hot Lighthouse Boy. But also, we may not. I couldn't tell you even if I did know. That's not a not-so-subtle way of me saying I do know and I'm just not telling, that's just me saying I don't know. For now, I'll leave you with this gratuitous gif of Nolan Funk being everything I've ever wanted and more. Check out the movie on Aug. 23 at 8 p.m. for more abs, action, and... even more abs.

More like this
The 'Spiderhead' Movie Ending Is Nothing Like The Short Story It’s Based On
By Morgan Leigh Davies
Kimberly J. Brown & Daniel Kountz Looked Back On Their ‘Halloweentown’ Romance
By Stephanie Topacio Long
All The Sneaky Lindsay Lohan Movie Easter Eggs In Her New Ad, Explained
By Stephanie Topacio Long
Anne Hathaway’s ‘The Devil Wears Prada’ Anniversary Post Turned Political
By Brad Witter
Get Even More From Bustle — Sign Up For The Newsletter