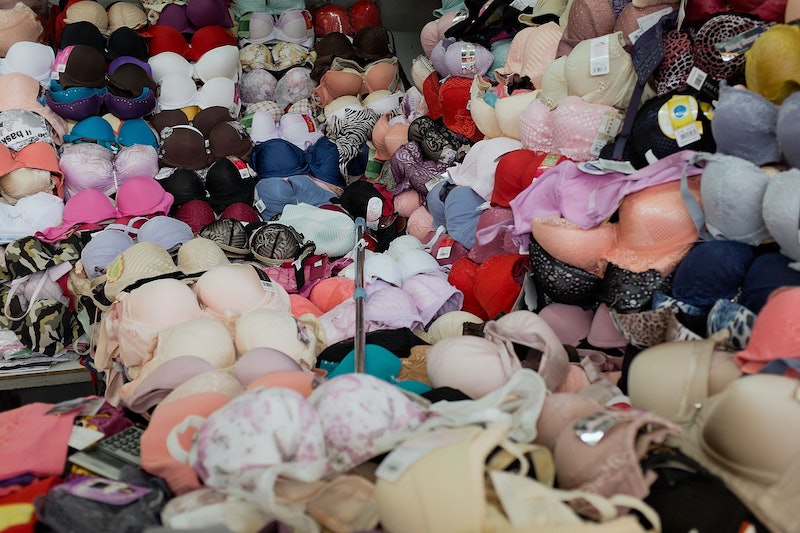 I am bra-attached and addicted to the support provide by my Victoria's Secret Shaping Demi. I have to be, since I'm a full D cup. The only time I go braless is when I am sleeping. Going braless is never really a viable option, unless it's for a quick errand, like walking my English bulldog Higgins, where I throw on a hoodie to maintain my dignity and conceal my not-as-supported boobs. While there are plenty of rules that busty girls can break, going bra-free isn't one of them for me. So, when a friend-in-need asked me to come over for an in-person vent session the other night, after I had ditched my bra for the day, I went through very specific emotional stages of going braless. We can't all be Rihanna, completely comfortable with going in public bra-free.

You see, it was after 8PM. I had settled in for the night, after working all day, going to the post office, hitting Starbucks, and going food shopping. I was ready to plop on the couch for a few eps of Cold Case Files. I was comfortably decked out in loose Forever 21 black sweats, a black Old Navy tank, and black Havaiana flip flops. When the call came in and I was summoned to be a sounding board and to offer some support to my friend, I had a support dilemma of my own: to bra or not to bra.

I literally argued with myself for 10 minutes about having to re-bra. I take care of my boobs like I take care of my teeth and my skin. I put extra time into them. I keep them perky as possible with proper support. I check for lumps every month. I pluck the stray hair that pops up here and there. Due to their size, I am acutely aware of my breasts at ALL times. So, yeah, going out for an impromptu hang without a bra is a big deal for me.

I ultimately decided to bite the bullet and leave my bra behind. These are the six emotional stages I went through when I made that somewhat unfortunate choice, which are totally different than the phases one goes through when doing something fun, like shopping for jeans.

Bras aren't the most comfortable things in the world, but personally? I am 99.9 percent more comfortable wearing one than not. However, when I ditch mine for the night, after 12-plus hours of wear, I'm done. I've moved on. I'm relishing the freedom. I'm in the no-bra zone. So to have to put it back on is, like, a mental chore. After I agreed to go over and hang for an hour, I grumbled and groaned about having to put my bra back on and thus change my chill mental state. And then I decided not to don a bra.

Having elected to go bra-free, reminding myself I'd be home in two hours, tops, and did the dog walking loose hoodie move, telling myself that only my friend and her roomie would see me. I accepted my own decision, with much hesitation. I tried telling myself that hanging at her house was no different than hanging at my own without a bra.

3. The "Questioning My Sanity" Stage

While I gathering my keys and crossbody bag — which certainly highlights bralessness even with the hoodie — I started having totally irrational thoughts. What if I have to run, because, you know, her apartment catches on fire and we need to flee to safety? I can't even make it up or down a flight of steps without the ouchies from such an activity when I am wearing a bra! What if my boobs start to hurt? Wait, why would they hurt? What if one of her neighbors sees me and thinks I am sloppy or that my boobs sag? Why would I care what someone I don't know thinks? What if I get pulled over and the cop is revolted by my lack of bra? What if he turns out to be my future ex-husband? Ack! The hamster wheel started spinning. I had questions about my own sanity for having so many questions about something so basic. WTF is wrong with me?!

I was in my car, having made the decision to go braless and there was no turning back. As I cruised down the backroads of New Jersey, I felt like I was driving naked. I felt loose, and not in the good way. The seatbelt across my chest did not feel quite right. I didn't like it. At all. It was annoying.

A lot of women have love-hate or even hate-hate relationships with their bras, which could be a problem due to wearing the wrong bra. I don't. I accept that I need my sling to defy gravity as a fact of big-boobed life. I am used to the straps and the underwire digging into my skin, even on hot days. I have no desire to set mine ablaze or incinerate it. The fact that I was so distressed at not wearing one for a discreet, evening hang with a friend, in her apartment, was psychologically eye-opening for me. It's not like I was going to an event in the city, letting Mary-Kate and Ashley hang out freely and unsupervised. It made me realize I am co-dependent on my bra and that I am a creature of habit, which is my way of forcing control in a chaotic world, right? Once I take off my bra for the night, it's off for good. Maybe I need to learn to be a little more flexible with my mental schedule.

6. The "Remember Not To Go Braless Next Time" Stage

Once at my pal's, I turned my attention to her. I listened. I forgot I was braless, but only after I told her that I was and to not look at my boobs while we talked. I know. Neurotic could be my middle name. We hung out for two hours. We hugged. I drove home, reminding myself that next time, no matter what the circumstance, that putting my bra back on is probably a better option if I don't want to go insane.