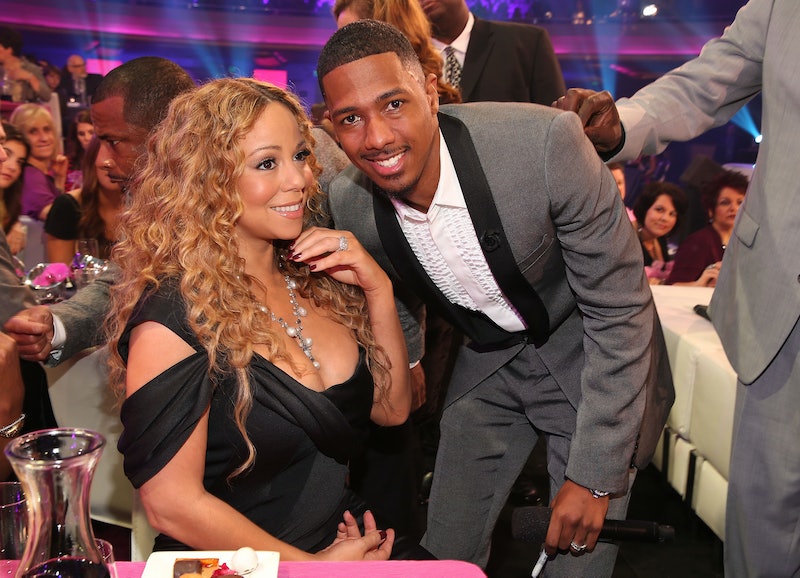 It seems that Nick Cannon's tendency to overshare has come back to bite him in the butt. I don't just mean that fact that Cannon and Mariah Carey are getting a divorce due in part to some TMI comments he made during various interviews in 2014. Apparently, Carey took it a step further in the new reports from TMZ. Not only is Cannon not allowed to talk about the divorce, but Cannon and Carey have a confidentiality agreement that basically states that Carey gets to announce it on her own terms. Honestly, considering Cannon's track record, that's probably a good idea.

Think back on Cannon and Carey's relationship and you'll realize that a lot of the candid, private facts that we know about their relationship came from Cannon's mouth. Remember that infamous Howard Stern interview where Cannon discussed his sex life with Carey and the fact that she's prone to some pretty extreme diva behavior? What about that time Cannon wrote a book about his children? I mean, while Carey seems to like to talk about things like the fact that she and Cannon are "soulmates", Cannon's recent discussions of his relationship details have been overly intimate.

When Cannon confirmed the news that the separation was a true story, he said that there was "trouble in paradise" and Bustle's Lia Beck pointed out what we were all thinking: who actually says that to describe their relationship? Considering that TMZ is reporting that Cannon faces "severe financial penalties" if he says anything abut the divorce, it's starting to seem likely that that's more or less all Cannon could say on the matter without having to cut a check to Carey.

Ultimately, it's for the best. With Cannon, you're never quite sure what you're going to hear or what he's going to say. The reports that have been swirling about the split so far have painted Carey as the kind of woman who hires security to keep women away from Cannon and who torments Cannon for weeks over admitting to sleeping with Kim Kardashian. If the reports are true, then those aren't the kind of stories that Carey wants confirmed about herself. If the reports are false, then Carey is fully justified in not wanting Cannon to have the opportunity to paint himself as the victim in all of this.