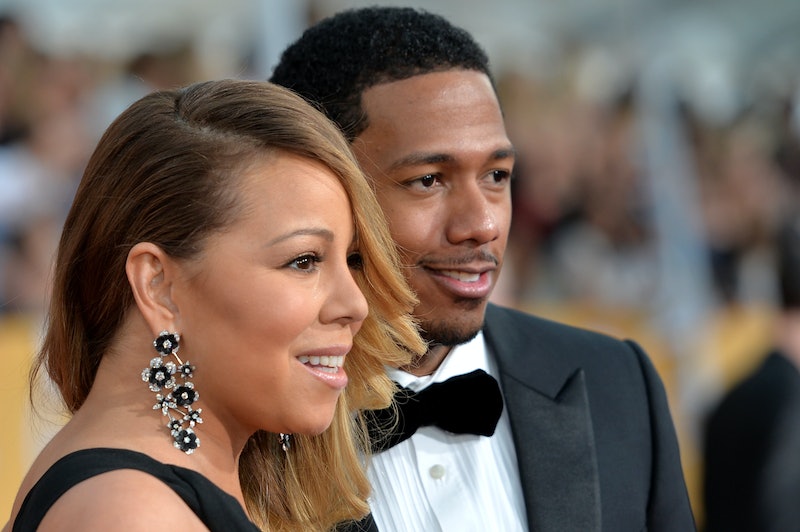 Well, it looks like in the case of a certain celebrity marriage, the rumors actually were true. Reports began in May that Mariah Carey and Nick Cannon were separating — and honestly, with how famous they are, the rumors likely stretch back all the way to their 2008 wedding — but started really heating up over the past week. Now it seems that all these anonymous "sources" and "insiders" really knew something was up because Nick Cannon has confirmed that he and Mariah Carey are separated. Cannon told Yahoo!'s The Insider on Thursday: "There is trouble in paradise. We have been living in separate houses for a few months." Sorry, Nick and Mariah fans . . .

There isn't much context for Cannon's quote, but the way he uses the tabloid-sounding "trouble in paradise" is kind of unsettling. As I see it, either he was asked with that phrasing ("Nick, is there trouble in paradise?") and he simply repeated it back; or he is making a mockery of the constant reports; or, worst case scenario, he is sensationalizing the separation himself. Hopefully, the latter isn't the case, but the fact that he spoke to a publication about it himself, rather than releasing a joint statement with Carey as is par for the course, is surprising. Another option would have been to just not talk about it at all, but I guess Cannon is a pretty open guy.

As for the reason Cannon and Carey are separated, according to The Insider he "dispelled rumors that the problems in his relationship are due to infidelity." Cannon added, "My main focus is my kids." It's been alleged that Cannon and Carey were on the rocks for various reasons including Cannon's use of whiteface for a comedy album to his comment in an interview that he slept with Kim Kardashian.

Obviously, the reason behind the split is unknown, and will probably be for some time, but it is now clear that Carey and Cannon are actually separated. Who knows what Cannon's reasoning was for coming forward — and his odd phrasing is still throwing me for a loop— but one thing's for sure: the rumor mill can dial it down a bit.

More like this
Adam Levine & Behati Prinsloo Welcome Their Third Child Together
By Jake Viswanath
Meghan Trainor & Daryl Sabara Are Expecting Their Second Baby
By Jake Viswanath
Hilary Duff's Husband Matthew Koma Has Her Name Tattooed On His Butt
By Jake Viswanath and Stephanie Downs
Harry Styles Is Performing At The 2023 Grammy Awards
By Jake Viswanath
Get Even More From Bustle — Sign Up For The Newsletter
From hair trends to relationship advice, our daily newsletter has everything you need to sound like a person who’s on TikTok, even if you aren’t.