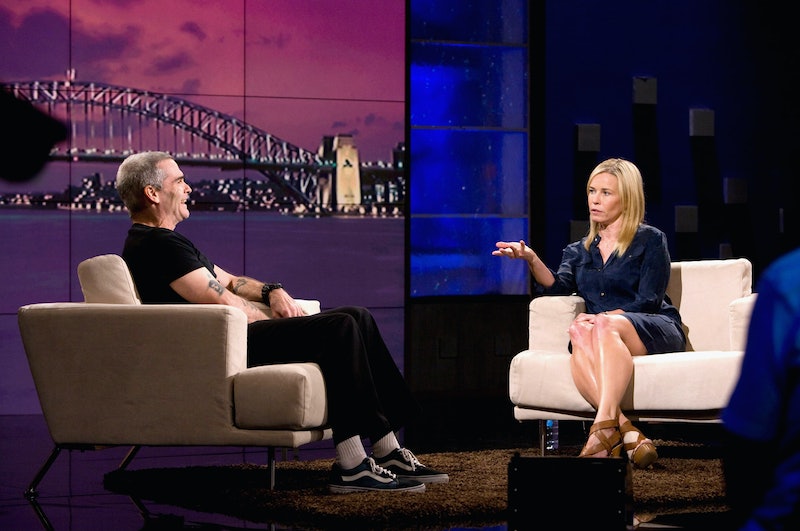 Say goodbye to Chuy, the panel, and Chelsea Handler's famous snark: Chelsea Lately is officially ending. Chelsea Handler has made E! her home for the past seven years, but according to the late night host, she's more than ready to move on. Handler's Chelsea Lately will end on August 26 after acting for more than seven years as the only female-hosted late night talk show on air. Handler is onto other things, and it doesn't look like she has many regrets about ending the talk show that made her a household name... sorry, Chelsea Lately fans.

It looks like part of the reason for Handler's exit has to do with the network the series has called home. According to an interview with Howard Stern, the talk show host called out E! and said that the network was a "failure" and a "sad, sad place to live." (I don't know about you, but any network that is paying me $9 million a year to talk to celebrities can't be that sad, but whatever.)

But if you want specific people to blame for the end of Handler's program, look no further than Justin Bieber and the whole cast of Keeping Up With the Kardashians. According to Handler's interview with the Daily Mail, Handler is over talking about celebrities. She said:

To be quite honest I don't really care about Justin Bieber and I don't want to talk about him anymore. In order to make that happen I had to just stop doing my show. You end up getting so into the mix that it changes the topics of the day... You can sit around and complain about all that shit and the Kardashians all day but if you're participating in it then what can you do? It really didn't feel great doing the show and the only way to sort things out was to extricate myself from the entire situation.

Ouch. Wonder what Kim K would have to say about that?

Handler's new goal is to talk to people who will "educate" her, which is what she plans on doing with her brand new talk show. Yep, Handler has a new talk show in the works, and it won't be on the celebrity-focused cable network. Handler's new talk show, which is planned for early 2016, will run on Netflix as the streaming service's first program of its kind. Handler's goal is to talk to people with "real human interest stories," so it's clear that the show will be vastly different from the shoot-the-shit-with-celebs approach Chelsea Lately took.

No matter what kind of show Handler is doing or who her guests are, it's nice to know that we haven't lost Handler as a host. We may have to wait a while for her Netflix show (almost two years!), but it's cool to know that Handler is moving on to what she considers a more fulfilling career. Let's hope her show is equally as entertaining as Chelsea Lately.

More like this
Here’s Everything Coming To & Leaving Netflix In July
By Grace Wehniainen
What’s New On Netflix: The Return Of 'The Umbrella Academy'
By Arya Roshanian
Bachelor Nation's Blake Horstmann Is Dating 'Love Is Blind' Star Giannina Gibelli
By Jake Viswanath and Radhika Menon
Move Over, 'Sunset'! The Drama-Filled Trailer For 'Selling The OC' Is Here
By Nola Ojomu
Get Even More From Bustle — Sign Up For The Newsletter