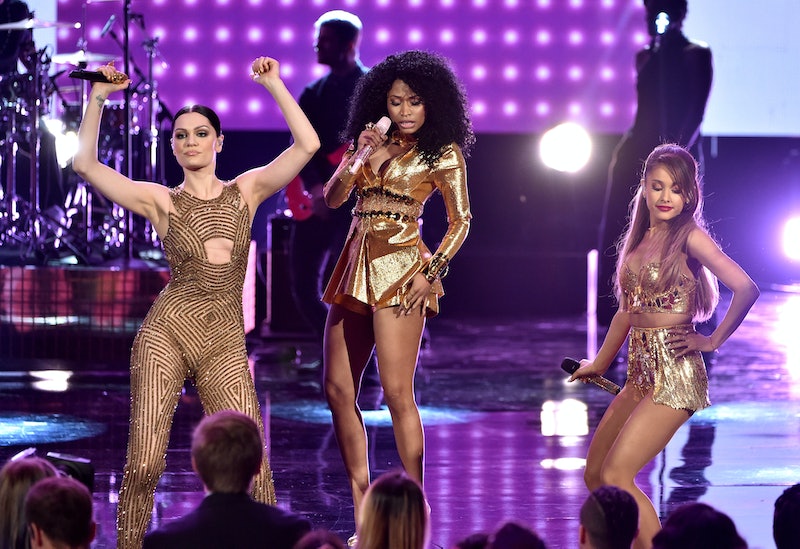 Listen, I am all for modern updates of old classics — note how much I loved Nicki Minaj's "Anaconda" music video — but we all need to take a moment to sit down and acknowledge that we have heard "Bang Bang" by Jessie J, Minaj, and Ariana Grande before back when it was called "Lady Marmalade". In fact, I think most of us are willing to admit that already, but I don't think we realize exactly how similar the two songs actually are. Listening to "Lady Marmalade" right before you listen to "Bang Bang" will reveal that the two of them are basically the same song, differentiated only by the fact that "Lady Marmalade" has four women on it instead of three and "Bang Bang" has all of its lyrics in English.

I'm not saying that "Bang Bang" isn't a good song, because it is. In fact, I would even dare say that it's way better than "Lady Marmalade" ever was. I just want to clear up any confusion regarding why you might have gotten déjà vu listening to "Bang Bang" for the five hundredth time. It's because they're literally the same song.

Both songs purport to be empowering feminist anthems about female sexuality and being the pursuer instead of the pursued. Sure, there are problematic aspects with the feminism present in each song, but we appreciate them for what they were trying to do: give us a barely-covert way to sing about sex.

Speaking of which, is there a person over the age of 15 who isn't aware that "Lady Marmalade" and "Bang Bang" are both about sex? Like, literally, the whole song. It's about sex. Actually, there are probably some even younger than 15 who kind of got the general idea, especially once they translated the French in "Lady Marmalade". Neither song is subtle.

Most of "Bang Bang" and "Lady Marmalade" is sang by the amazing talents of Grande and Jessie J or Aguilera, Mya, and Pink respectively, but the song gets upgraded by the rap verses performed by Minaj or Lil' Kim. It's ironic that Lil' Kim and Minaj should be feuding when they both took a good song and made it better with their rhymes. Then again, according to Lil' Kim's last diss track "Identity Theft", that might be exactly why they're feuding.

Both "Bang Bang" and "Lady Marmalade" compile some of the hottest female artists in the game in their respective times on one track, uniting their fan bases for at least the length of the song. Whether you were listening to "Bang Bang" for Jessie J, Minaj or Grande or listening to "Lady Marmalade" for Aguilera, Mya, Pink, Lil' Kim, or because it was on the Moulin Rouge! sountrack, you got your money's worth in sheer star power alone.

All I'm saying is, if you added one more female artist to the cover of "Bang Bang" then they probably would have laid it out like "Lady Marmalade".

During the outro of "Lady Marmalade", Lil' Kim announces the name of each artist on the song and they answer by singing a note, presumably to help newcomers differentiate their voices. During her rap verse on "Bang Bang", Minaj proudly states, "It's me, Jessie, and Ari". You know, just in case we had no idea who we were listening to.

More like this
What Is Ariana Grande's Net Worth? When It Comes To Money, She Has No “Problem”
By Hugh McIntyre
Adele’s All-Female Lineup Includes Kacey Musgraves, Mahalia, & Self Esteem
By Shahed Ezaydi
Daryl McCormack On His Unusual First Audition With Emma Thompson
By Olivia-Anne Cleary
Adele Says Postponing Her Las Vegas Residency Was “Brutal”
By Alyssa Lapid
Get Even More From Bustle — Sign Up For The Newsletter