Confession: I think juice cleanses are bullshit. I have never once felt compelled to try one, mostly because you know what? I like food. The idea, therefore, of eliminating everything from my diet except some weird concoction of lemon juice, maple syrup, and cayenne, makes me want to run screaming into the nearest walk-in fridge. Even so, although I and others like me experience a deep shudder running through our bodies at the mere mention of the phrase “juice cleanse,” we’ve been hearing the benefits of such a project extolled for a number of years. But are they really all they’re cracked up to be? Not according to James Hamblin, M.D. of The Atlantic. In fact, according to Hamblin, juice cleanses are the worst.

For the latest entry in his “If Bodies Could Talk” video series, Hamblin took on juice cleanses in general and the Master Cleanse in particular. According to the good doctor, there’s no scientific evidence that juice cleanses are better at removing toxins from the body than, y’know, the organs you have that are specifically designed for that purpose. Furthermore, a quick look at this piece from the Huffington Post debunks a whole bunch of the claims juice cleanses make. For example, juice isn't healthier than whole fruits and veg; for one thing, you're not getting any of the fiber they contain, and fiber . . . well, let's just say you shouldn't scrimp on it.

Although Hamblin really, really resisted doing a cleanse for the purposes of the video — the only thing that will happen is, he says, the fact that “I’ll feel terrible… and everyone around me will suffer” — he eventually buckled down and agreed to try the Master Cleanse. You can probably guess what happened next: failure. Complete and utter failure. When he’s caught eating a nut — a nut, singular — at 11:12 a.m. the first day, he remarks, “How are you supposed to do this without protein?” A valid question, I feel. And then it’s all downhill from there. Here, give it a watch: 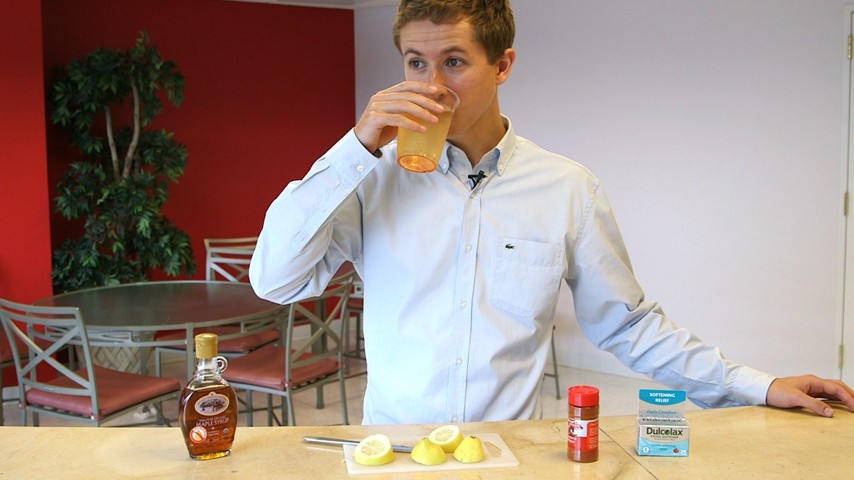 OK, so yes, the video is partly played for the comedy. In spite of the humor, though, Hamblin is right: It does take a lot of willpower to go through with a cleanse, and having that kind of willpower is, in fact, commendable. But if you really want to “cleanse” your body, you might want to skip the juice. I'm no doctor, but from what I've read, eating foods as close as they are to how they occur in nature — raw fruits and veggies, whole grains, and so on — is the way to go. You’ll be healthier in the long run, and as they say: An ounce of prevention is worth a pound of cure.