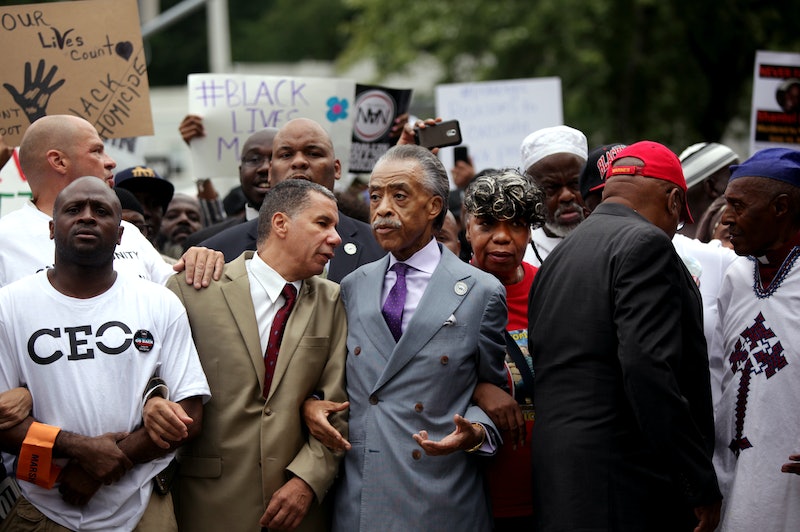 As protests in Ferguson subdue, thousands of New Yorkers took to the streets of Staten Island on Saturday to march for Eric Garner, an unarmed black man and father of six killed by New York Police Department officers in July. Led by Rev. Al Sharpton, the Eric Garner March For Justice united several thousand people at the Tompkinsville Park intersection where Garner was killed, allegedly after being placed in a chokehold by an NYPD officer. The march then ended in a rally at the office of Staten Island District Attorney Daniel Donovan, who's overseeing the grand jury case.

According to CBS New York, Sharpton spoke at a service at Mount Sinai Church before the rally began. Sharpton has also been a strong presence in Ferguson, Missouri, for the last two weeks, meeting with the family of Michael Brown. Here, Sharpton called for peaceful demonstrations while addressing the on-going problem of excessive police force. "If you can do it to him you can do it to any citizen," Sharpton said. "We are not going to be silent while that happens."

CBS New York reports that Garner's wife and mother also spoke at the service, remembering the late Garner while also urging others to put an end to police brutality. "Let’s just make this a peaceful march and get justice for my husband so this doesn’t happen to nobody else, nobody else’s son,” Garner's wife said.

Garner, a 43-year-old father of six, had allegedly just broken up a fight in the Tompkinsville Park neighborhood of Staten Island when he was detained by several NYPD officers. Garner had previously been arrested for illegally selling untaxed cigarettes.

He reportedly said to the police officers, "Every time you see me you want to mess with me. I'm tired of it. It stops today!" before being placed in a chokehold and wrestled to the ground. Garner, who has asthma, repeatedly told the police officers he couldn't breathe, but they continued to hold him against the sidewalk. A video recorded by a witness captures these events, including Garner's death several minutes later.

At Saturday's rally, protesters reportedly chanted "I can't breathe" as they marched through Staten Island. They also adopted the slogan that has become a rallying cry in Ferguson: "Hands up, don't shoot." Banners with the words "We Will Not Go Back," the theme of the rally, were also waved throughout the march.

Here are some more scenes from the Eric Garner March For Justice rally...