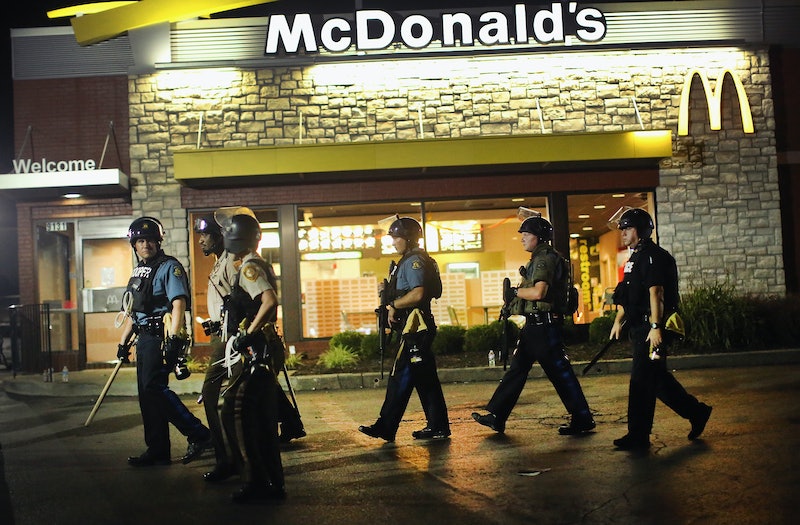 Remember that time in Ferguson, Missouri, when local law enforcement broke out their best riot armor, tanks and tear gas to quell mostly peaceful demonstrators? Yeah, about that. Those images of military equipment being used on American citizens on the ordinary-looking streets of a St. Louis suburb have been on the minds of many politicians and activists these days, pressing President Barack Obama to order a review of police military equipment and the federal programs and funding that allowed police militarization in the first place.

According to NBC News, the president wants the review to look into the reasons why domestic police forces even need equipment such as military guns and armor — and if those reasons are valid. He has also directed an analysis of whether or not local forces are properly trained on how to use the special — and often, highly dangerous — hardware.

Reuters reported the investigation will be led by White House staff, with collaboration from the Departments of Defense, Justice, Treasury and Homeland Security. Congress, which approved these federal-funded police militarization programs in the first place, will also be joining in on the fun.

Obama's new directive shouldn't come as a surprise — in fact, the president is making good on a recent promise. On Monday, Obama hinted in a press conference that it may be time to revisit the funding of local police forces with high-tech military gear, as well as how they've used the funds. The president reiterated the domestic police forces should only be "purchasing stuff they actually need."

So, how did armored vehicles, M-16 rifles and camouflage fatigues end up in the hands of local police forces, anyway? Well, the Defense Department's 1033 program is one answer. The program enables the department to spread surplus military equipment to law enforcement agencies across the country. According to the Defense Logistics Agency, more than $5.1 billion in equipment has been given out since the program's inception in 1997.

However, it's still unclear how St. Louis County Police went off the armored deep end last week. The Missouri Department of Public Safety notes on its website that equipment from the 1033 program should only be used in counter-narcotics and counterterrorism operations — and it's (very) doubtful that the Ferguson protests qualified as the latter. The department also states the hardware can be used to "enhance officer safety," but that vague directive may not be enough to justify the use of military equipment against unarmed demonstrators.

Stranger, still, is the sense of entitlement produced by the meager offerings of the 1033 program. A Defense Department official, speaking on condition of anonymity, recently told The Christian Science Monitor that the entire St. Louis county received just a dozen M-16 rifles, seven Humvees, six Colt .45 pistols and three helicopters.

"And that has made you into a bunch of Rambos? Really?" the defense official told CSM. He had a few other choice words for the St. Louis police officers, including a Tim Gunn-esque take on their fashion sense: "And why are they riding around in woodlands camo in a city? That kills me."

Questionable camo aside, riding armored tanks through the strip mall-lined streets of a modest St. Louis suburb does need to be addressed. The intent to bulk up local police forces with a few assault rifles and Humvees stemmed from the so-called Wars on Drugs and Terror, but at this point, it might as well be the Battle of the Police Force Inferiority Complex.