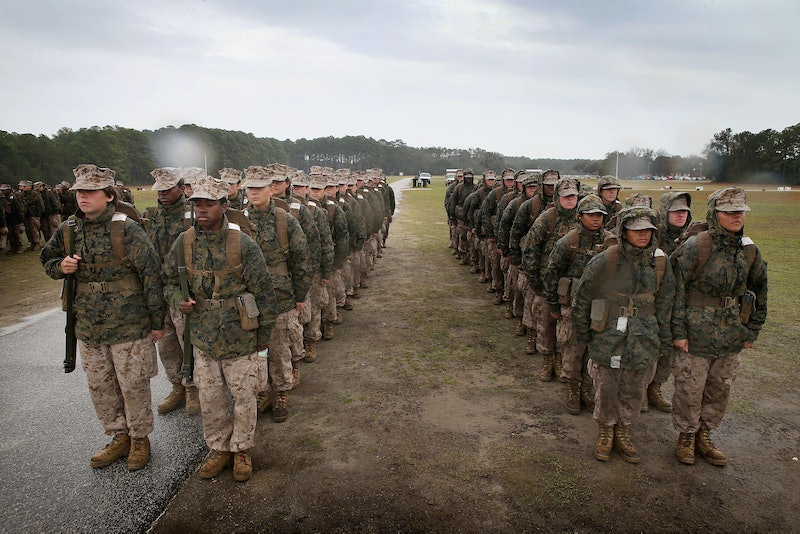 While most of us are celebrating Veterans Day this Tuesday, the truth remains that less than one half of one percent of the American public is currently serving in the military. And of that one half of one percent, only 15 percent are women. That might explain why many non-military people don’t seem to know what to make of many women's military experience. As a West Point graduate, a former Army officer, and a combat veteran, I'm in a unique position to change that by sharing my own experience.

Since the majority of those serving in the Armed Forces are still men, their voices are the ones most clearly heard. But the truth is, women have long contributed to military efforts — and now on an unprecedented level — you just don't hear our stories that often. We are recognized for our ability to “fit in” and not draw attention to ourselves, and to “hang with the guys,” with no acknowledgement of how freaking hard that actually is.

So this Veterans Day, here are some harsh realities about being a female service member that, in my experience, at least, are all too often overlooked. This can't be every woman's experience, but it was mine.

1. It can be very lonely

Making gal pals isn't exactly easy when you're in the military. In any given unit, there just aren’t that many women, so the odds that you’ll find your new BFF are slim. When I was assigned to a virtually all-male unit, it was basically impossible. Many of the friends I did make inevitably moved away when we were reassigned, deployed, or sent on special assignment. As an officer, I wasn’t allowed to hang out with enlisted soldiers, so I was even more isolated.

Oh, and God forbid a female soldier should find meaningful friendship with a guy. At best, everyone just assumed they were sleeping together, and at worst, the woman was labeled a tramp.

2. We didn’t need a Congressional Act to go into combat

Before I deployed, I often heard the reassurance, “Women aren’t on the front lines, so you’ll be OK.” It quickly became clear that just wasn't true. I don’t care what your branch was, everyone got up close and personal with some pretty hairy stuff. If you were on the road, well, convoys got hit all the time. If you were on the FOB, you got rocketed.

There were plenty of women working as engineers or military police, so clearly stated parts of their job (clearing routes, manning checkpoints) involved direct force. Combat action badges are worn by guys and gals alike. If anything, the amount of publicity given to the repeal of the ban on women in combat roles was a little insulting. What should have been a quick and quiet acknowledgement of the status quo and opening of new positions became an excruciating series of discussions and “analyses” that ignored what has been a reality for decades.

Sitting in the desert for a year surrounded by people who would like to kill you is hard. Really hard. Having to work with local nationals on “Advise and Assist” missions sounds friendly, but when you’re locked and loaded the whole time because, well, they might just try to kill you. Not knowing when the next rocket is going to come over the wall screws with your head. It screws with your sleep. Some days, I felt as if something horrible was always about to happen to me or someone I cared about.

Inside and outside the military, there’s this idea that PTSD is mostly experienced by men. Because dudes are the only ones in combat, right? Someone who doesn’t know better hears about a male soldier struggling with bad dreams and alcoholism and thinks, of course! But if I, a delicate young lady, mentioned that I was feeling crappy, wasn’t sleeping, and just couldn’t keep it together, I often faced a barrage of questions: What did I do that was so hard? What did I see? Am I sure that I’m really depressed or am I just having a bad day? Am I overreacting? Making it up for attention? The knowledge that asking for help might make us seem weak and single us out as the “over-sensitive” chicks has kept too many of us quiet — even when the walls are crumbling.

4. Being single can set you back

While military culture advances just like the rest of society, it’s always lagging behind by a few decades. So, folks in the military tend to get married and have families young. When I got to my first unit I was a unicorn — a 23-year old single female officer. (To put that in perspective, I had graduated nine months prior, and had already been to six weddings.)

When I told my commander I wasn’t married, he asked when I planned to be. When I said I wasn’t planning on tying the knot anytime soon, he felt compelled to ask why, and then warn me (which was actually less condescending than it sounds and more of an honest piece of advice) that I needed to be extra careful about how I behaved in front of my soldiers and not divulge any details about my personal life. In other words, if a single guy came in hung over and full of stories from last night’s hookup, he got a high five. I, on the other hand, would get stamped “open for business,” and my reputation would suffer.

5. …But being married isn’t enough

When I did get married it was like I became a different person — my commander and more senior officers in the battalion began inviting us to dinner and taking an interest in my personal life. Married coworkers suddenly wanted to be friends. I could casually talk about my weekend in the office without feeling like I was being judged, because since I was married, I could do no wrong.

The grace period lasted a few months before the inquiries started rolling in for both of us — when were we going to have a baby? Were we trying yet? Were we having trouble? (And, oh-by-the-way, here’s the name and number of our fertility specialist.) I was reminded constantly that having a child was what would make me “whole,” and what would make us an inseparable family unit. When I would assert — again and again — that my husband and I were in no way ready to start a family, I was met with the same look of mixed disdain and pity. I was 25 years old.

6. Being a dual military couple is really, really hard

A dual military union is, by definition, extremely unstable. For one, as long as the two of you are in the military at the same time, you can — and will — be separated. Married couples do get consideration for dual relocation, but it’s hardly a guarantee. When my husband got a job at another post halfway across the country, I still had to stick around and deploy with my unit before my branch manager would even think about finding a way for me to go with him. There is a painfully large number of people who get married just to stay together, and an awful lot still get split up, deploy on separate rotations, or get stationed at separate posts that are deemed “close enough.”

Seriously, imagine having to wonder daily if you’ll be cohabiting with your spouse a year from now. That was my marriage for three years.

7. If your spouse leaves the service and you don’t, get ready to get some grief

If you’ve got a ring on, the first question you get won’t be, “What does your husband do?” Rather, it’s “What unit is your husband in?” Military women married to civilian men are perhaps even more of a rarity than single female officers.

My husband left the military before I did — and anytime I mentioned it, I’d get a look of shock followed quickly by a look of either confusion or disgust. I was actually asked: “Does he like you working with so many other men?” “Is he intimidated by you?” “Who wears the pants in this relationship?” My personal favorite? “I’m surprised he’s OK with that.”

8. many of us are sexually harassed, assaulted, raped, or domestically abused on a regular basis

Sexual assault in the military is a term we are finally starting to hear — but I, and so many others, have lived it. It’s demeaning, infuriating, and terrifying.

We are warned constantly to watch ourselves because anyone with a few years’ experience has seen it happen over and over again. When your profession revolves around unit cohesion and teamwork, though, it’s hard to shut yourself off from every guy who talks to you. And to be fair, most of the men I served with are great people whom I respect and miss dearly.

But there are some real scumbags, too, and it’s not always easy to pick them out until it’s too late. Ask any lady vet, and she’s got a story or two of having been verbally assaulted, violated physically, or subjected to severe domestic abuse. Looking back on one’s time in service should be a moment of immense pride, but for so many, it’s one of sadness and shame.

9. And Reporting a sexual assault isn’t as safe as you think

Want to know what’s even more messed up? The military’s woefully outdated reporting system, which everyone seems to be talking about but doing nothing about. I worked as a unit victim advocate for two years and, while we stressed to everyone that we had a responsibility to police our ranks, put up posters, and give classes, I only had one case that ever went to court. I know that far more women than that suffered an assault.

Public statements about zero tolerance and victim privacy are all well and good, but the reality is that it's still extremely scary to report military sexual assault. It’s easy to point fingers at the victim and accuse her of making it up and messing with unit cohesion. You worry about becoming “that girl” forever. Whether that's true or not, a lot of us weren't willing to take the risk.