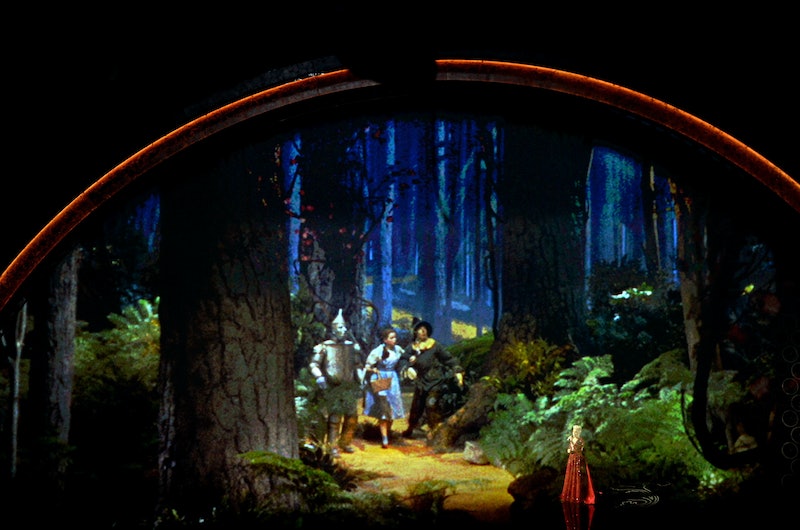 If you read the original description for NBC's innocence-annihilating series Emerald City, you may have wished that a house was dropped on the project, much like The Wicked Witch of the East. Well, good news! Deadline reports that Emerald City will not see the light of day. Let's bring out the Lollipop Guild to celebrate, 'cause Emerald City was downright disrespectful to its source material. It lacked a heart, a brain, courage, so now — it doesn't have a home. Boom. Ain't nothing like an obligatory Wizard of Oz reference.

The show had lofty intentions: it was supposed to be a dark and gritty version of The Wizard of Oz, slightly inspired by Game of Thrones — apparently all of those Game of Thrones mashups had producers scratching their heads a bit too much. The series would have depicted Dorothy in the center of a bloody, brutal battle for Oz because you know — Cersei is The Wicked Witch of The West-eros. Badumchh.

You may be able to see why someone might have though Emerald City sounded like a good idea. After all, I do concede — the original Wizard of Oz is slightly dark (it's pretty grave to have a house drop on someone). Still, there's no need for Dorothy Gale to pull an Arya Stark and witness some familial bloodshed. Uncle Henry does not need to go the Ned Stark route. And besides, The Wizard of Oz is a sentimental piece of your childhood, right? There's no need for it to be tarnished and metaphorically decapitated!

Of course, some might say, "but-but-but..Wicked!" Yes, Wicked is a real gem (and something you should not sing at karaoke unless you possess Idina Menzel's vocal range), but for every Wicked, there's always a child-ruining Return to Oz, which, if you don't remember — and hopefully, you don't — then I will refresh your memory. I'm sorry in advance.

So, yeah — you'll be okay without Emerald City. You may return to singing "Defying Gravity" from Wicked or "Over The Rainbow" from its source material now.