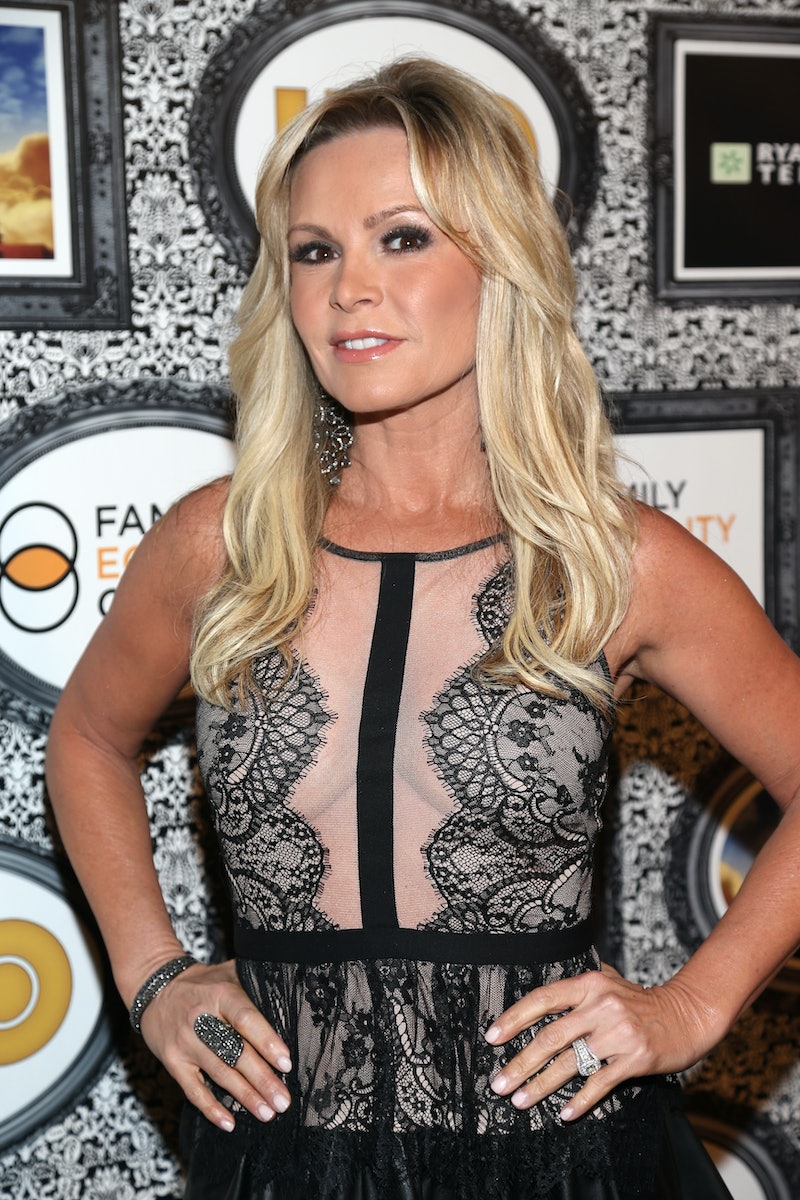 Tamra Judge has found herself at the center of controversy both on and off of Real Housewives of Orange County this year. While on the show she argued with old friend Vicki about her relationship with Brooks Ayers, behind the scenes Tamra is embroiled in serious family problems. The source is Tamra's ex-husband, Simon Barney, who you may remember from Tamra's first few seasons on RHOC. Their divorce was contentious, and Simon is battling his ex-wife for custody of their three children, Sophia, Sidney, and Spencer. The kids don't appear on the show anymore, and Simon is accusing Tamra of failing to provide a safe environment for the kids while she has custody.

Like any custody battle, it's bitter, vicious, and feels too private to be public knowledge. But the Barneys are fighting it in tabloids and blogs as much as they're fighting in the courtroom. Simon claimed that Tamra is neglectful, and in return, Tamra reminded the public about Simon's arrest for domestic abuse in 2010, and allegedly in 1997 as well. Daughter Sidney has reportedly voiced support for her father on Twitter, while Tamra has made a concentrated effort to show her other daughter, Sophia, at home doing homework, cooking dinner, and goofing off with her on Instagram.

But there's another layer to the story, and one that rips away whatever sympathy is granted to Tamra for Simon's sleazy behavior and the unfortunate situation of being forced to battle in court for the right to see her own children. She very well may have leaked fake divorce/cheating rumors in order to drive up interest in her storyline this season, as reports about Tamra and husband Eddie's relationship by Celeb Dirty Laundry suggest. Not only is Tamra and Eddie's gym, CUT Fitness, subject to a good deal of negative reviews, but in large part because of the divorce rumors, Bravo wanted Eddie to appear on the reunion, and when he declined, the rumors got even stronger. Tamra blames her ex, telling All Things Real Housewives that Simon is friends with a reporter for Radar Online who is throwing out fake stories, her relationship has always been healthy, and she hasn't implied differently at any point.

There's no level Tamra won't stoop to to keep her job, but as a wife and mom, let's hope she has some scruples and chooses to preserve her marriage, business, and relationship with her children over another season of Real Housewives of Orange County. If what they want is a dramatic, tense marriage on the verge of breaking up, honestly at this point, it's not worth it —even if that means those of us in the audience lose a few months of Tamra gossiping and running through hotel lobbies in tears. We'll live to watch another wine glass get thrown. There's no shortage of hot-tempered Southern Californians. Tamra should prioritize her actual family, not her Bravo "family."

More like this
Clayton & Susie Broke Up, Citing "A Significant Amount Of Pain" After 'The Bachelor'
By Jordyn Tilchen
‘The Ultimatum: Queer Love’ Is Officially On The Way
By Radhika Menon and Kadin Burnett
Kendall Jenner Thinks Tristan Thompson "Wanted To Trap" Khloé With Another Baby
By Jake Viswanath
Gisele Bündchen Appears To Address Those Tom Brady Divorce Rumors
By Radhika Menon
Get Even More From Bustle — Sign Up For The Newsletter