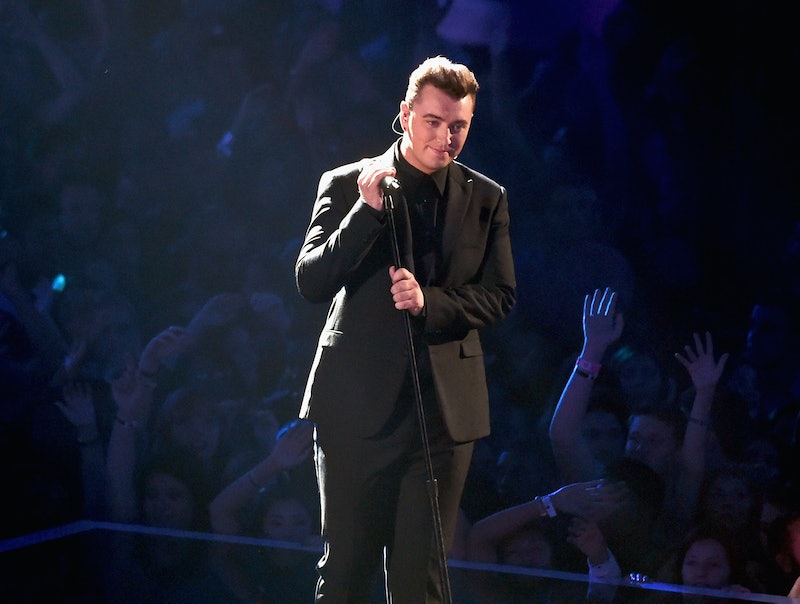 Well, that escalated quickly. After three different MTV VMAs performances were knocked out in the first few minutes of the awards show, all of the other planned performances suddenly became even more exciting, because they were all we had left to look forward to. Of course, Sam Smith's VMA performance was already bound to be a highlight and when it came along, it took the night in a totally different direction than the one that Ariana Grande, Nicki Minaj, and Jessie J started, and Taylor Swift continued.

No army of backup dancers, no sequined outfits, no elaborate sets, no smoke machines, nothing. Just Smith in a dapper black suit standing in front of a microphone, with someone playing a piano behind him. Smith delivered a beautiful rendition of his hit "Stay With Me" that was much more likely to make you cry than the version you hear on the radio — and that's saying something. Without any sparkly distractions, you could see the emotion in his face as he sang, and that made his performance much more effective than the others we've seen tonight.

The only problem with the performance? It wasn't long enough. It seemed like just moments after Kim Kardashian West (yup, let's not forget that's her full name now) introduced him, the camera was pulling back as MTV cut to a commercial. If there was enough time to give Jay Pharoah multiple bizarre monologues, there should've been enough time for Smith to perform two songs.

That's not the only way Smith didn't get what he deserved at the VMAs either. Early in the night he lost the award for Best Male Video to Ed Sheeran, who won for "Sing" featuring Pharrell. Hopefully next year the VMAs will be kinder to Smith. I'm sure by then he'll be even more established as a truly talented artist who can keep everyone's attention, using nothing but his voice. Check out the performance below and see for yourself just how much Smith has to offer.