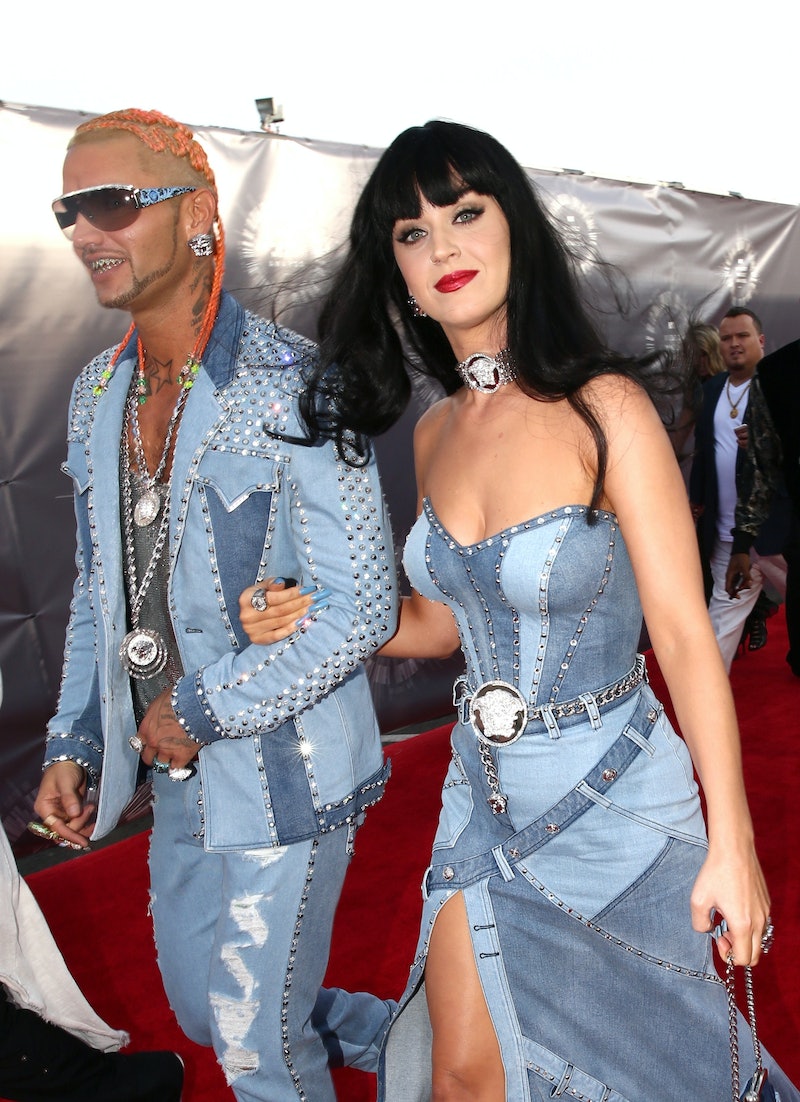 As you may have noticed if you watched the live, technical difficulty filled telecast on Sunday night, Katy Perry and Riff Raff attended the VMAs together. This was notable for a couple of reasons. For one, because they took it upon themselves to reference the Britney Spears and Justin Timberlake Formal Denim Extravaganza of 2001. (This, in case you were wondering, is totally not cool. Britney and Justin's blue jean formalwear is a national treasure and no one should ever try to replicate it.) For two, because Perry and Raff were once thought to be dating. Back in March, they both Instagrammed photos of a "date" and Riff Raff told TMZ that it was "an average date situation" and "who knows where things might go." At the time, it appeared to me that Riff Raff thought the dating thing was actually happening while Perry seemed to think it was more of a joke. And, what do ya know, I'm getting those same vibes now.

Katy Perry and Riff Raff recently teamed up for the remix of her song "This Is How We Do," so they were definitely there to promote their collaboration, it's just unclear if they're also dating. In a video taken by TMZ of Perry and Raff after the show, the two are seen walking to their SUV and when asked if they're together, Riff Raff responds, "We got a couple kids on the way." Katy Perry giggles and they enter the car. Then things get weirder. Perry rubs her hand up against the tinted window à la Titanic and when they roll down the window, Perry says, "I love him." The chat ends with Perry being asked about a baby in a music video (or something...) and she says, "That's our baby, Future." Or maybe she's saying, "That our baby — future." Either she's saying that it's their future baby, or that their baby is named Future like Ciara and Future the Elder's. For optimal strangeness, I'm really hoping its the latter.

Even though both Perry and Raff were going along with this whole dating thing, I can't help but think that if it came down to it, Raff would be the one really wanting a relationship to happen. After all, Perry is hugely successful and one of the most famous people on the planet, and Riff Raff is a rapper who is more well known for being the inspiration for James Franco's character in Spring Breakers than for his music. Can't you just see this ruse going on for a couple more weeks and then Riff Raff sitting her down and saying, "But, like, for real though, we're dating, right?"

But maybe I'm being unfair to Riff Raff. Who says he's the kind of guy that would date someone for fame? Hey, it could be that Perry really does love him. For now, it's still unclear exactly what is going on, and if things continue as they have been, we won't hear anything about Kat-Raff for another five months, then in January we'll find out she really is pregnant with "Holly Highroller." Yep, that's the name suggestion Raff gives in the video.