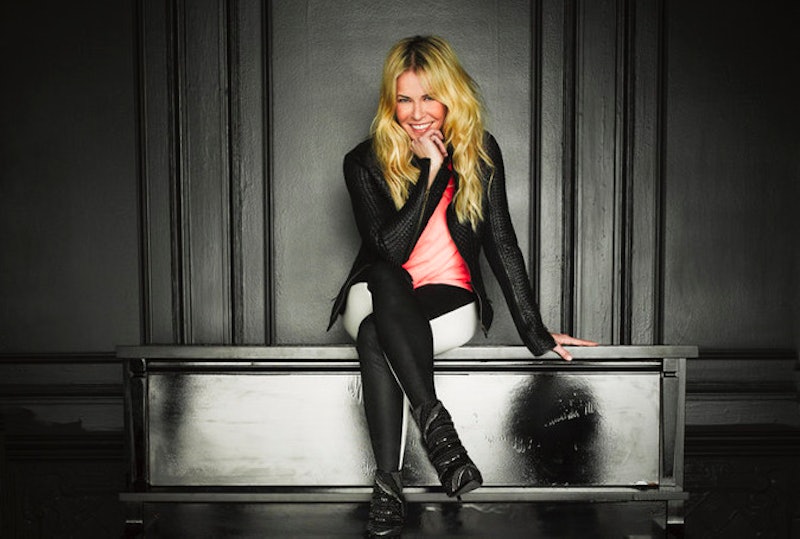 At approximately 12 a.m. ET on Tuesday night, there will officially be no women in late night television. Chelsea Lately airs its final episode August 26 and with it goes Chelsea Handler, the only woman hosting her own late night talk show in a sea of chatter led by men. That's all he wrote, folks. The landscape now officially belongs to men. And while I would mourn the loss, there is actually a light at the end of the tunnel. And there's a woman holding it up.

Those who've been following the politics of late night television know how increasingly infuriating it is to watch male host after male host step up to the increasingly varied late night plate. Where we used to simply have a guy on NBC, a guy on CBS, a guy on ABC, and a coupla dudes out on Comedy Central, we know have one more dude on Comedy Central (and sometimes AMC), one on HBO, one on TBS, and even one on SyFy. And while I wholeheartedly love the comedy stylings of Chris Hardwick (the hardest working man in Comedy), John Oliver, Conan O'Brien, and Will Wheaton, I can't help but wonder how Late Night is so full of opportunities for men and yet there are so few for women.

It's not as if there has been a lack of job openings. New late night shows seems to pop up every day and when David Letterman announced he was stepping down as the host of the late show, the Late Night wars began. There was a brief period before Stephen Colbert was announced as his successor that many of us enjoyed the glimmer of hope that something could actually change. The landscape might finally stop looking like this:

Handler was clearly primed and ready to take over Letterman's seat. CBS had the opportunity to change the game — not to mention, potentially find its edge over the indomitable Jimmy Fallon by enlisting someone who, in the basest terms, would be completely different from every host out there. Instead, the network chose to maintain the status quo and no matter how talented Colbert is (minus that Roscoe Emmys routine, of course), he's absolutely maintaining the Late Night boys' club.

Now that Handler's talk show — which was always a little fringe — is ending, the future looks even more grim that I once thought. While Tina Fey has her facetious theory that Ellen DeGeneres will be the first to break into the mainstream Late Night game because "she's already wearing blazers" the fact of the matter is that there is something inherently holding networks back from supporting women in comedy. Sure, it's tradition to have a man hosting these programs, but when "tradition" becomes synonymous with "exclusionary" and "sexist" we have a problem.

Rather than fighting tooth and nail to edge her way into a club that's a veritable sea of dad jokes and inoffensive observations, where Fallon playing parlor games with celebrities is deemed hip and refreshing even in a post-Between Two Ferns world, Handler is firmly mounting her freak flag in new ground.

Of course, there isn't all bad news. Handler isn't leaving late night completely. Handler's new venture with Netflix, which serves as the reason she's ending her show on E!, is sort of a late night program. The series is billed as an on-demand talk show, and will offer her the opportunity to break away from chattering on about Kim Kardashian and Justin Bieber — a practice she says she grew tired of at E!.

"If I was going to continue working in this industry, I knew I had to do something outside the box to keep myself interested,” she said in an interview with Howard Stern. “I wanted to sit with the cool kids at lunch so I approached Netflix to make sure they were as cool as I thought they were, and when I confirmed my suspicions, like with any other future lover, I made my move. I’m more excited than I’ve been in awhile, and the team at Netflix is the most forward thinking, alert group I’ve sat down with in ages. No offense to the Shahs Of Sunset.”

While she won't be changing the face of the realm that belongs to Fallon, Kimmel, and Colbert, she will be a leading force in a new wave of television — if we can even call it that anymore. Moving the talk show format to an on-demand platform is undoubtedly revolutionary, allowing for more freedom with topic selection and of course, Handler's famous foul mouth. Just look at how far series like Netflix's Orange is the New Black and House of Cards are able to go in terms of plot and dialogue. In some ways, those programs are even a little freer than the unchained fare on HBO and Showtime, because unlike those platforms, Netflix is completely outside of the cable realm.

I'm never going to get over the way fantastic, hilarious women get shut out of the late night wars so completely, but here's the massive silver lining: Rather than fighting tooth and nail to edge her way into a club that's a veritable sea of dad jokes and inoffensive observations, where Fallon playing parlor games with celebrities is deemed hip and refreshing even in a post-Between Two Ferns world, Handler is firmly mounting her freak flag in new ground.

It's a truly promising transition. Handler is exploring new territory and what looks to be the true future of television (it the success of OITNB and House of Cards is any indication). And that's where everyone, male or female, should be striving to break through. Let the boys keep their old dusty club. We've got something better in our sights and Handler is proudly leading the way. If the boys won't let us play, Handler's simply ready to build her own damn sandbox. And it's more than about time.

More like this
Netflix’s ‘First Love’ Is Like ‘Normal People’ Meets ‘50 First Dates’
By Grace Wehniainen
At 14, Pauline Chalamet Fell In Love & Danced ‘The Nutcracker’
By Grace Wehniainen
‘The Mosquito Coast’ Book Ending Includes A Major Character’s Death
By Brad Witter
'Wednesday’s Percy Hynes White Is Reuniting With Jenna Ortega For A New Film
By Grace Wehniainen
Get Even More From Bustle — Sign Up For The Newsletter