Who wouldn't want to attend a dinner party at the Stonefield household? I'm imagining there would be tipsy parlor games aplenty and extra-weird rounds of Cards Against Humanity, all followed by a pie bake-off in their state of the art kitchen. Just saying, I'm rarely wrong about these things. In the event that Andrew Garfield and Emma Stone actually live together, this fantasy could easily be your reality. That is, you know, if you have the innate talent of penetrating the circles of entertainment industry fantasy besties. But even if you don't plan on showing up one day, you may be asking yourself: Where do Emma Stone and Andrew Garfield live? Do they live together? And, if they are indeed in my vicinity, what are they up to tonight, and do they wanna come over for a marathon of Enlightened?

The answers to those respective questions: a few places, potentially; probably; and I can't help you on that one. Sorry!

In November 2012, the NY Daily News alleged that the couple was living together in a newly purchased a 4-bedroom ranch house in Beverly Hills. Although Stone is the only person who reportedly purchased the house, clues suggest that Garfield was cohabiting with the starlet. In an interview Garfield did with Ellen Degeneres that same month, Garfield hints sheepishly that his relationship with Stone is all romancey-pantsy. 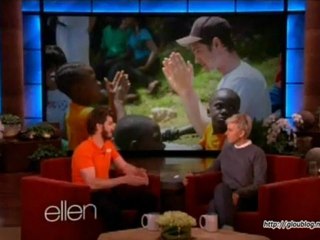 Does this seem like a jocular attempt to brush off the fact that he and Stone are probably engaging in a constant hangout fest or what?

Since they met back in 2010 and started dating shortly after, the Beverly Hills house could be the second space that they've (maybe) lived in together. The couple has reportedly also lived together in New York. Another article in the NY Daily News says that Stone and Garfield moved into a New York townhouse in April 2012. The couple moved out in September of the same year to go on tour to promote The Amazing Spider-Man. Not letting the world down on their status as mensches and super cool people, the owner of the apartment told the Daily News that the couple was "very nice." Thank you for keeping the positive PR of Stonefield intact, good sir!

Furthermore, Stone and Garfield have an adorable puppy. According to an E! Online article from January 2013, Stonefield adopted a golden retriever from a high kill shelter in Los Angeles. Since expanding their family with a canine friend, the pair have been spotted walking their puppy around New York. I mean, if they're co-parenting an animal, and giving it walks around New York, signs point to the two living together in The Big Apple as well as LA. According to IMDb, The Amazing Spider-Man 2 filmed during 2014 in various locations around New York, so it would make sense for the pair to have an NY pied-à-terre. However, the project also films at a studio space in LA, so it's likely that they're going it bicoastal.

This year, Stonefield has apparently been considering some serious real estate decisions on both seaboards. In May 2014, the Daily Mail published an article saying the couple was looking at a mansion in LA to move into together. An 8-bedroom palace nestled on 21 acres, this pad would be an extreme Hollywood upgrade from the house that Stone reportedly purchased back in 2012. In addition to this rumored Cali pad, the pair was spotted the very same month in New York, allegedly on an apartment-hunting jaunt.

In conclusion, it's very probable that the pair is living together in both New York and LA. Woohoo! Constant sleepover all day, every day.