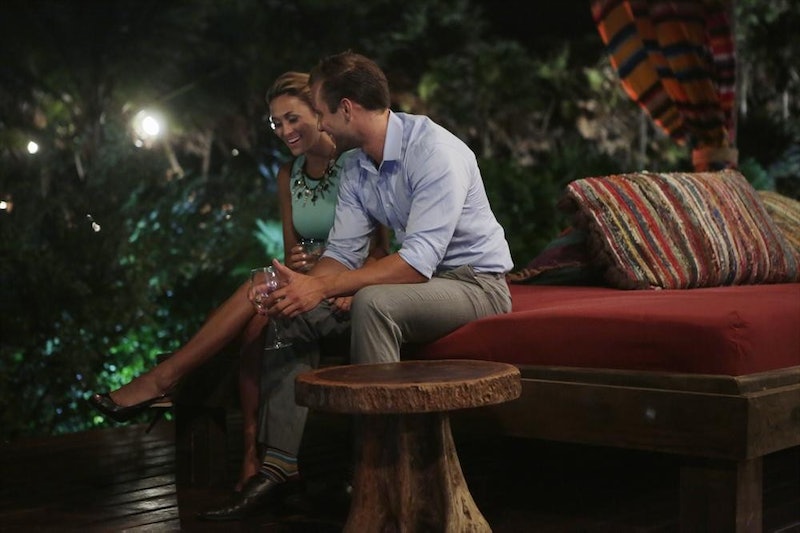 While it seemed that Tuesday's special episode of Bachelor in Paradise would be about AshLee & Graham and their insane meltdown from Monday night, that changed in the blink of an eye. When AshLee's borderline sociopathic decision not to follow Graham when he leaves the rose ceremony fails to open Graham's eyes to AshLee's confounding ways, the other women are disgusted to say the least. But Lacy Faddoul, Marcus' rumored fiancée, seems to be the most disgusted as she leaves the rose ceremony throwing up in an ambulance. He goes with her and the forecast isn't looking so great for her balmy Tulum evening. Isn't Mexico romantic?

Of course, when Lacy first starts exhibiting symptoms of her illness, they stomach pains are coupled with a scathing review of AshLee's behavior. When Graham leaves the rose ceremony and AshLee doesn't follow, ABC delivers a voiceover from Lacy in which she suggests that AshLee's actions prove she doesn't care about Graham. Lacy goes so far as to say that the display between the duo is making her sick when Graham accepts the rose despite getting sick over the decision moments earlier. And then she gets sick... for real. It appears that Lacy is being an attention hog, right in line with all of her other look-at-me behavior. And even if that were so, it would be more than welcome.

After all, the Graham and AshLee relationship is the most obnoxious pairing on this show that is practically reeking with obnoxious characters. While it's unfortunate that Lacy turns out to be actually sick, the silver lining is that it momentarily killed the insane and creepy plot between Graham and AshLee. At least until Graham inevitably comes to his senses. (Please say he'll come to his senses.)

The other silver lining for Marcus and Lacy is that their relationship is getting a proper test — in sickness and in health, right? The duo have been posting plenty of happy Instagrams (sans each other, because of dumb ABC rules) so they clearly made it through this momentary illness unscathed. And since we know they're OK, we can thank them for using their love to interrupt an otherwise terrible moment of television. So thanks, guys!