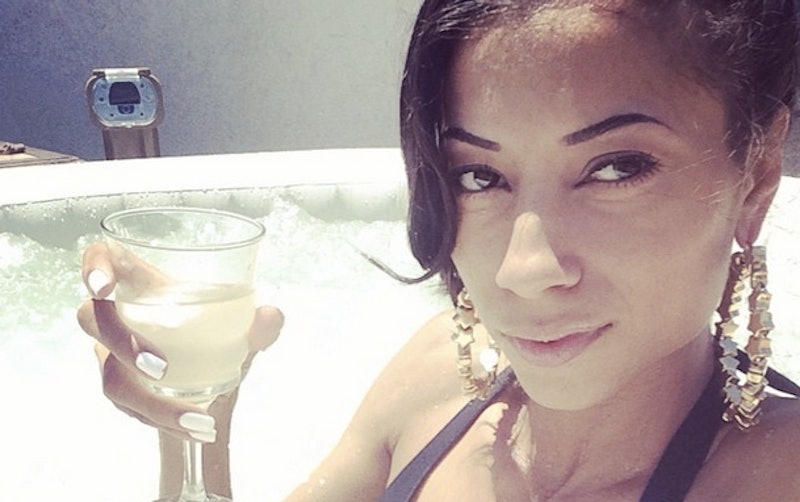 Praise be to the spirits of awesomely bad music videos! "Yes Liv Can" is at it agin. Jay Z's alleged mistress Liv has dissed Beyoncé and Nicki Minaj with another shade-packed, lyrically lampooning music video. On Tuesday, the Internet personality and aspiring emcee uploaded a new track called "The Invasion Part 5 (CheckMate)" to her YouTube page, which features her blatantly insulting the Nicki Minaj/Beyoncé "Flawless" remix, dancing alone on her roof and even indulging in a board game.

The latest installment of "The Invasion" (what Liv is calling her quest to dominate the hip-hop world and vanquish all of the celebrities she hates) appears to be a message directly to Beyoncé to stop acting like Miss Perfect all the time. "CheckMate" supplies us with such overt insults as: "Talk about flawless, y'all far from that/Let's talk about all the surgeries y'all had." Name-checking Minaj in the first verse ("You fuck around with Nicki, that's a setback"), working with the "Anaconda" singer is clearly high treason in Liv's book. This relatively unknown rapper has raked Minaj over the coals in previous tracks, like in her song "Body Bags" with the line: "Got you lookin' like a mess/Rappin' like you got Tourettes."

Yeah, so it's safe to say that Liv doesn't have the "Flawless" remix on her iTunes. She calls the track "trash" before incredulously asking, "It took two of y'all to come up with that?" Later on, she stages a mutiny at the altar of Sasha Fierce, as she shouts from her apartment rooftop: "The only thing I bow down to is God." Something tells me she doesn't get out much...

You'll remember Liv publicly dissed Beyoncé before in her "Sorry Mrs. Carter" video, which reads like the wine-induced solitary rant of a girl who never leaves her house and spends her day trying on all the outfits in her closet. In summation, the message of the video is "your man wanted to cheat on you with me, but I have morals, unlike YOU!"

"CheckMate" basically serves the same amount of heavy shade, only this batch is lower, more pathetic, and less likely to be acknowledged. Hey, at least in this video, Liv has made time in her busy schedule of being mildly agoraphobic to leave the house for a stroll around the block and a rousing game of chess. She DID things today!