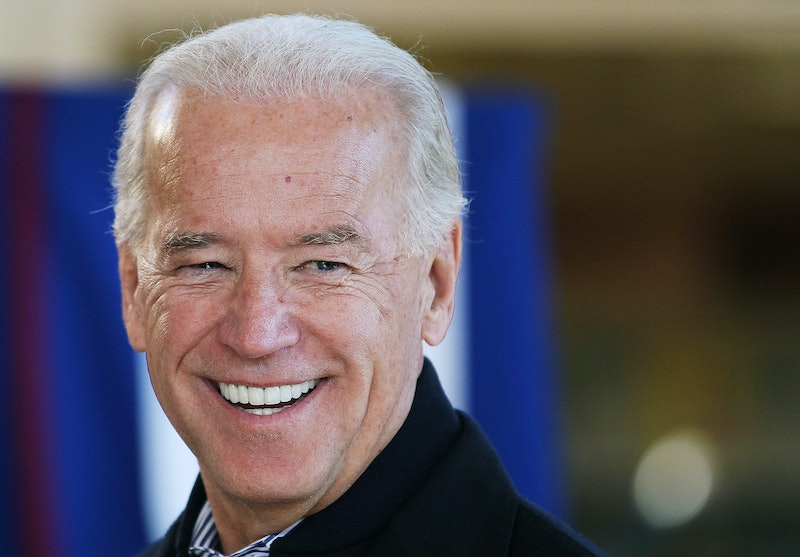 Can you remember a more beguiling vice president in recent history than Joe Biden? If you're of my generation, then the answer is most likely no. Dick Cheney? Don't make me laugh. Al Gore? He had that brilliant "Sexy Back" joke, but that was about it. No, Joe Biden is, by far, the most charming vice president of my lifetime. But don't take my word for it — watch Joe Biden flirt with 108-year-old veteran Lucy Coffey at the White House and see for yourself. Don't be surprised if you find yourself blushing.

Lucy Coffey, the nation's oldest living female veteran, made a recent trip to the White House, where she met the vice president and President Obama. Coffey, who enlisted in the Women's Army Corps in 1943 during World War II, has earned two Bronze Stars for her service. Even after being honorably discharged from the Army, she continued to work in civil service and on a Texas Air Force base until she retired in 1971. In other words, how could you not love this woman? Biden realized immediately that Coffey was a catch.

When Biden first greets Coffey, he can barely contain his excitement. "Lucy!" he shouts, followed by his million-dollar smile.

Just as they start getting to know each other, Biden says, with an air of disappointment in his voice, that he has a "younger friend" who wants to meet her. And in comes Obama.

Obama gives Coffey a special commander coin, takes a few photos with her and the group, and leaves. It's all business. It's clear that there's something more between the lady of honor and the vice president, who is eager to continue their date.

"You know what this reminds me of?" Biden asks her. "It reminds me of every time I had a good-looking date, there would be some better-looking guy coming along to dance with." Biden draws laughter from the room, but he can't keep his eyes off Coffey. "The president comes in and everybody drops everything..."

The two hold their gaze as Biden fumbles for the right words. "But I'm the guy who loves you," he says, making Coffey laugh like a girl. If you could bottle the chemistry between these two, you'd be able to melt all of Antarctica, because it is hot.

Biden and Coffey resume their date, and it really does feel like a first date — all that's missing is the ice cream sundaes. Biden tells her about his mom, the day he and Obama were elected, and he even gives her a stuffed animal of his German shepherd, Champ.

When he says goodnight, I mean goodbye to Coffey, he whispers softly to her, "You're a special lady" and gives her a kiss on her hand.

A total gentleman, right? Perhaps, but that's not why we love him; we love him because he's a mischievous flirt who really knows how to work a room.

Coffey hasn't even left the room yet before he starts flirting with another woman, a firefighter this time. "I knew there was something about you that I liked," Biden says to her before saying, "Come here, kid" and gives her a bear hug. Biden certainly seems to have a type, and suddenly I want to join some sort of service profession.

Watch the entire video below and get ready for your heart to pound out of your chest.

Coffey is far from the first lucky gal to have been on the receiving end of Biden's magnetic charm — and we're not just talking about Jill. He's made practically all of Washington blush everywhere he goes, from the Senate Swearing-In Ceremony to the State of the Union Address earlier this year.

And who can forget the time Bide spotted someone in the audience during Obama's State of the Union Address, pointed, and smiled devilishly? I, for one, cannot get that smile out of my head.

Speaking of his smile...

And the way he takes off his glasses...

And the way he looks at babies...

Is everyone still alive? Because I think I just died.