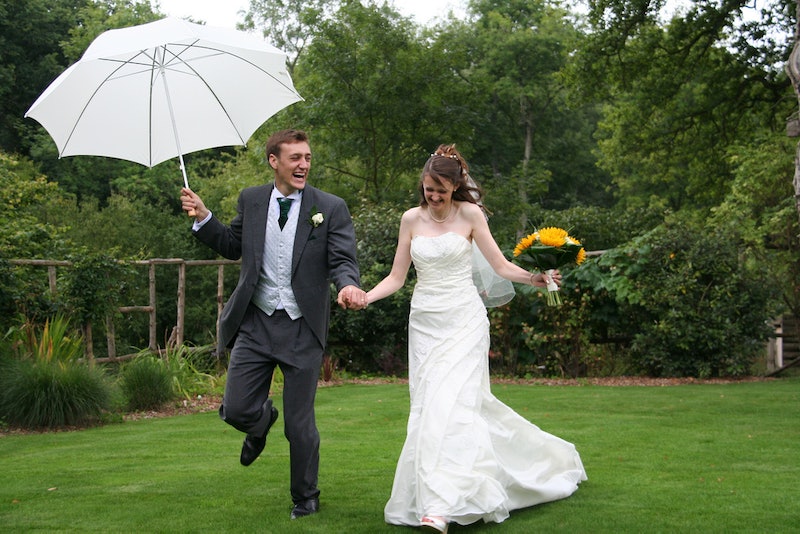 Well, this is… odd: According to the preliminary findings of a study being conducted by sociologists from NYU, short men stay married longer than their taller counterparts. I’ll admit that my initial reaction to this news was something along the lines of, “…Huh?” It seems like one of those phenomena that should fall under the “correlation is not causation” rule: Why on earth would how tall you are affect how long your marriage lasts? They appear to be totally unconnected, and therefore an extremely strange thing to be studying.

Here’s the thing, though: The two factors in question — the height of a guy and the length of a marriage — might be related after all. Why? Because it ultimately has something to do with the struggle for power. According to the working paper’s data, short men marry later and at lower rates; they’re also more likely to wed lower-educated, younger women and, as such, earn more income within the relationship. Tall men, on the other hand, marry earlier, and their spouses tend to have achieved more education and make more money (they also tend to be of the same race, but I'm not sure how relevant that is to the matter at hand, so do with it what you will).

You know that old saying about people feeling the need to compensate for their shortcomings? That seems to be what’s going on here for the shorter dudes. As Quartz puts it:

“On the income side, if you think of marriage as a market and tallness as a valuable commodity, short men ‘make up’ for lacking it by earning more money. If you take the model further, the authors write, the results indicate that by ‘the perspective of relationship exchange models, this indicates that the tallest men exchange their attractive attribute (height) for better-educated spouses, while short men are unable to do so.’”

Regardless, though, perhaps the most troubling question brought up by the research is this: Taller men, even if they make less money in their relationships, gain specific social benefits from their height. This means that even if the money thing puts them in a “less powerful” position, their height gains that power back. Shorter men don’t have the power benefits from height, so they assert their power within their relationships — making more money than their partners, staying married longer, and so on. As Jenny Kutner at Salon points out, the ultimate effect of all this is “the reassertion of traditional gender norms, specifically in the relationship patterns for shorter men.” Yikes.

Of course, it’s also worth noting that boiling all relationships down to height and money dramatically oversimplify them. Additionally, these findings are preliminary, so there’s a still a lot more research to be done before we can draw any hard and fast conclusions from them. As Tech Times notes, it adds “an interesting layer to the dialogue of how we interpret and react to masculinity” — but I’d still take it all with a grain of salt if I were you.

More like this
Bumble's "Compliments" Feature Lets You Message Before You Match
By Lexi Inks
15 Ways To Deal With A Toxic Family During The Holidays
By Gabrielle Moss and Carolyn Steber
8 Money Saving Experts To Follow For Accessible Advice
By Maxine Harrison
Are Capricorn & Aquarius Compatible In A Relationship? Astrologers Weigh In
By Kristine Fellizar
Get Even More From Bustle — Sign Up For The Newsletter