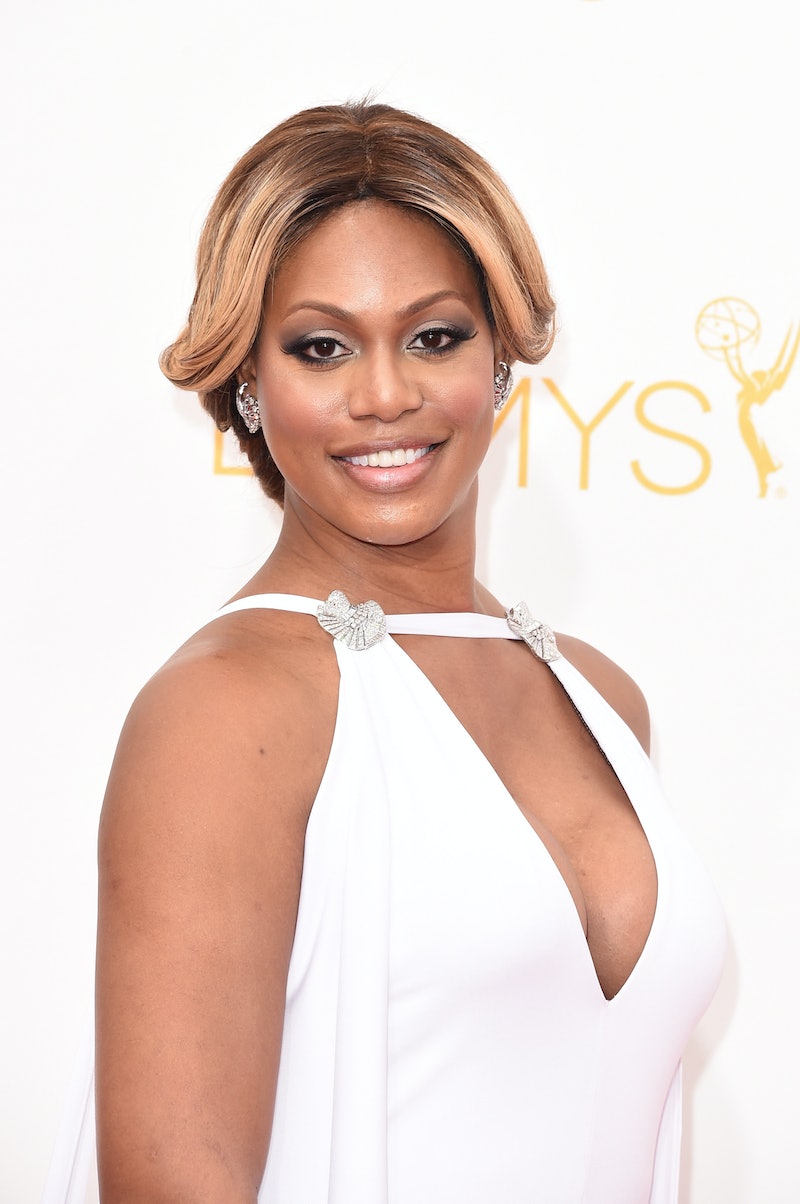 By now, most people know that if you give Laverne Cox a microphone, she's going to say something incredible. Whether she's educating Katie Couric, speaking out about making history, or advocating for the rights of trans women, the Orange Is the New Black star has never wasted an opportunity to make noise on issues that matter. Yet all of her past talks, as great as they were, were building up to a Keppler Speakers lecture Cox gave about sexism, racism, and transphobia, in which the actress gives one of the most moving, incredible speeches of her career.

Although the talk was recorded in December, Cox's message is even more relevant now than it was then, considering the news events of the last few months. In the clip, the actress recalls a moment, 10 years ago, when she experienced harassment from two men while walking down the street. As the men argued over whether she was a "bitch" or a "n---er," Cox felt the same unsettling discomfort familiar, she said, to all trans people, especially women of color.

"Our lives are often in danger, simply for being who we are," Cox said.

The actress grew emotional as she recalled two recent cases of trans women killed for their identity, and as she described the several factors — misogyny, transphobia, racism — that cause so many members of the trans community to be fearful for their lives. Cox also eloquently explained her theory as for why most of the street harassment she's experienced has been from black men; the "collective trauma" of slavery and the Jim Crow South, she said, specifically the genital mutilation that would often follow lynchings of black men, has resulted in a "fear and fascination with black male sexuality."

Because of that, she explained, many black men might feel that there's been an emasculation of black male bodies during white supremacy, and that black trans women are "the embodiment of this historic emasculation come to life."

"So often, when I am called out on the street, it's as if I am a disgrace to the race because I am trans," Cox said.

While she doesn't condone her oppressors, though, she understands them. Cox spoke of the pain that she believes most of them feel, and how they deal with discomfort about themselves by attacking others for their differences. Yet this bullying, she said, is hugely dangerous, especially to LGBT children, specifically trans girls, who will grow up to be more susceptible to unprovoked violence than their straight peers. In 2012, Cox said, trans women, particularly those of color, made up 54 percent of all LGBT homicides.

"There is a link between the bullying we inflict on our LGBT youth and the violence that so many trans women experience," Cox said. "What are we gonna do about that?"

It's an incredibly moving speech, a perfect mix of eloquence and emotion. The harassment Cox has experienced may be specific to trans women, but her main message — bullying can be prevented, but it's up to all of us to make that happen — is relevant to everyone, regardless of gender or sexual identity. The matter of making the world a safe environment for all who live in it is not exclusive to one group of people, and Cox's speech, along with the other powerful talks she's given over the years, should encourage viewers to work on creating her suggested "safe spaces" for those who feel different.

In the eight months since she gave that speech, the Orange star has gone on to make huge strides for trans men and women, from landing the cover of Time to receiving an Emmy nomination. This week, someone altered her Wikipedia page to make fun of her gender; in interviews, she's had to steer the conversation away from her genitals and onto topics that matter. If one of the most visible trans people in the world is still fighting transphobia and misogyny this often, clearly the battle's far from won; hopefully, though, speeches like this one will be the motivation the world needs to start making some much-needed change.