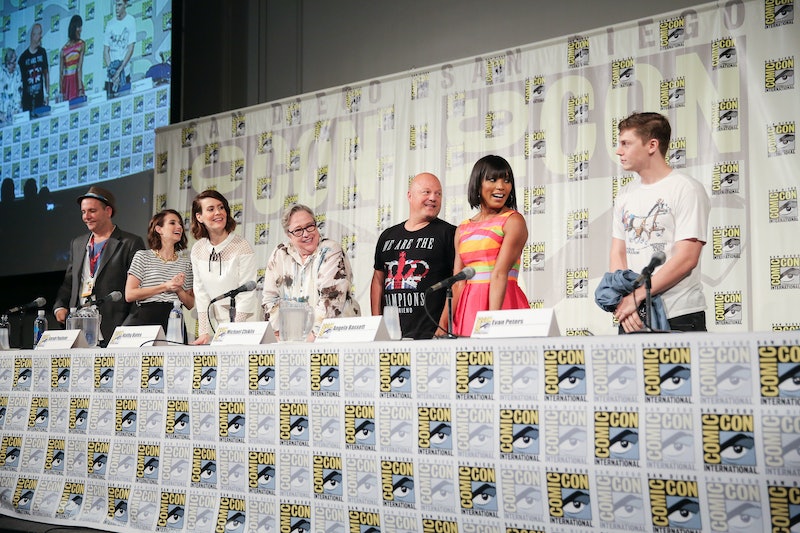 It’s almost October 8 (almost, okay?), which means you should start prepping yourself for Season 4 of American Horror Story: Freak Show and all of the terrors you (I) will start having once the show premieres. This season’s theme is Freak Show , and if you’ve been keeping track of the teasers FX has been leaking, you already know that there is a lot of weird shit going down this year. Something that might comfort you in your moment of fear is that there might be a familiar, smiling face this season. Yes, Pepper is back.

While most of the cast this season is the same cast we’ve grown to love over the past three seasons, never has an actor reprised their role as the same character from season to season. Pepper, if you don’t remember, is the microcephalic woman played by Naomi Grossman, in Asylum. She was kind enough to offer Lana Winters a flower when she first arrived at Briarcliff, saying, “Play with me!” Later in the season we found out Pepper had not committed the crime she was instituted for, but, as she said, “that’s how it works for us freaks, we get blamed for everything.” Look, I don’t want to read too much into that, but she calls herself a “freak”, so do with that what you may, my friends.

The reason behind the frenzy that Pepper will be making an appearance in Freak Show is due to a leaked — yet unconfirmed — call sheet listing her as a cast member. Although it hasn’t been confirmed by FX if the call sheet is real, the names on the sheet were confirmed at an American Horror Story panel days after the photo leaked. It is also worth noting that with a little detective work, Grossman is credited on IMDB to play Pepper for episodes 4.1 and 4.2 (rejoice!).

So Pepper’s return has us seeing double, which we are totally for. And Pepper making an appearance in Freak Show isn’t the only reason we are seeing double. Just from the teasers that have been put out by FX so far, it seems like things come in multiples in Jupiter, Florida, where the upcoming season takes place.

Sarah Paulson’s character will be a two-headed lady this season, Dot and Bette.

This is by far the most disturbing 13 seconds I’ve ever seen. I’m sorry for putting you through that, I just didn't want to be the only one reliving that today.

In a new teaser, an aerialist is seen doing her thing up in the air, and it seems grool. Then you realize, “hold up, one, two... THREE.” Yeah, she has three legs, because why not?

Anyway, back to your normal musings.

More like this
All The ’70s Easter Eggs You Missed In 'That ’90s Show'
By Grace Wehniainen
Everything To Know About A Potential 'Lockwood & Co.' Season 2
By Gretchen Smail
Shonda Rhimes Responded To The Surprise Exit Of A Day 1 'Grey's Anatomy' Figure
By Grace Wehniainen
This 'Gossip Girl' Wardrobe Error Has Gone Viral On TikTok
By Alyssa Lapid
Get Even More From Bustle — Sign Up For The Newsletter
From hair trends to relationship advice, our daily newsletter has everything you need to sound like a person who’s on TikTok, even if you aren’t.