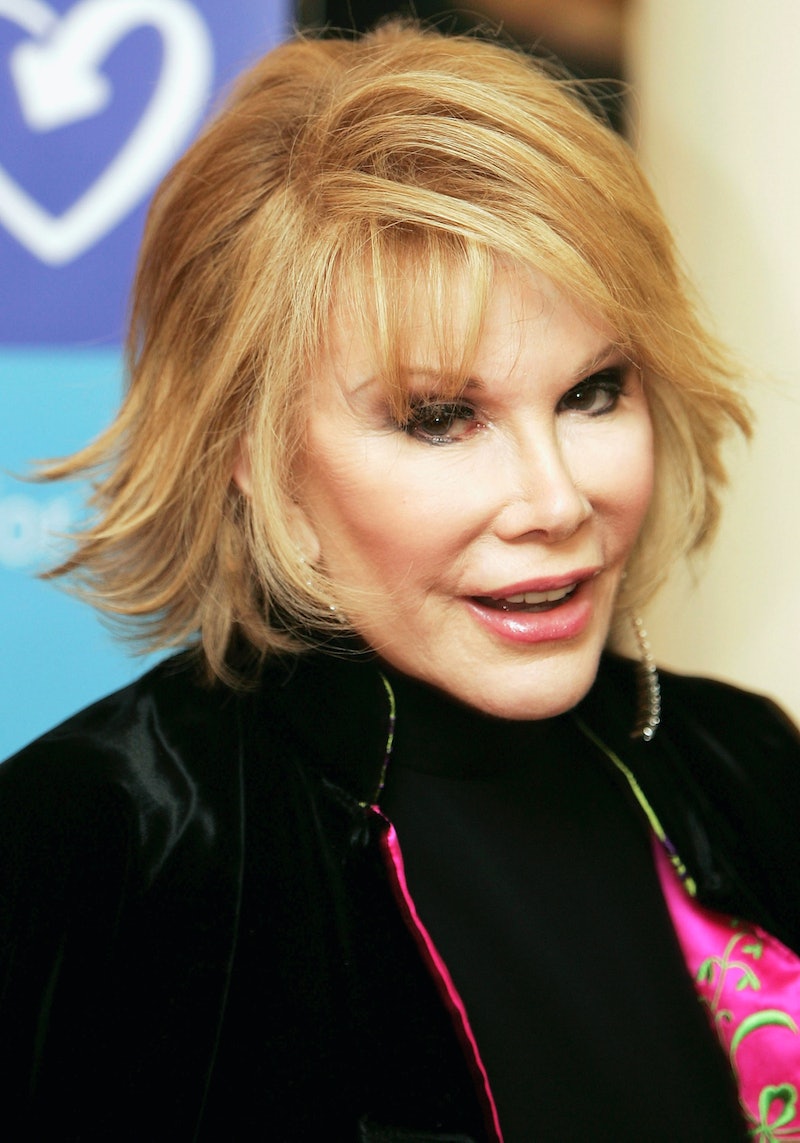 The woman seemingly made of stone (or as she'd say, plastic) has passed away. According to NBC News, Joan Rivers died on Thursday. The Fashion Police host was rushed to the hospital on Thursday when complications arose during outpatient surgery on her vocal chords. At one point during surgery, the 81-year-old comedian stopped breathing, and TMZ reports that Rivers' heart may have also stopped beating at another point during surgery. Rivers was in critical condition, then upgraded to stable condition, which was rumored to be a medically induced coma. Sadly, Rivers didn't pull through.

Rivers' style of comedy isn't for everyone, and sometimes her jokes could border on cruel. But the woman was a steely broad unlike any other, and she was always one to poke fun at herself before anyone else. Here are some of Rivers' funniest quotes that prove that she was one of the ballsiest women in the business.

"My face has been tucked in more times than a bedsheet at the Holiday Inn."

"Grandchildren can be so fucking annoying. How many times can you go, 'And the cow goes moo and the pig goes oink'? It's like talking to a supermodel."

"All I ever heard when I was a kid was, 'Why can't you be more like your cousin Sheila?' And Sheila had died at birth."

"A man can sleep around, no questions asked. But if a woman makes 19 or 20 mistakes, she's a tramp."

"I've learned: When you get older, who cares? I don't mince words, I don't hold back. What are you gonna do to me? Fire me? It's been done. Threaten to commit suicide? Done. Take away my show? Done! Not invite to me to the Vanity Fair party? I've never been invited!"

"I believe in telling it like it is. I've always been a no-holds barred type of person. I let it all hang out. I'm in bed eating Cheetos. How's that for telling it all? Who else would admit that over the phone?"

From Diary of a Mad Diva: "Woke up not feeling well. I spent the entire day online on WebMD. . . . I can say with 100 percent certainty that I have pleurisy, tuberculosis, brain stem cancer or an enlarged prostate. I found a great cure for whatever ails you. God bless the Internet! A coffee enema. . . . The only negative: I can never go back to Starbucks."

From I Hate Everyone . . . Starting with Me: "I know what you're thinking: 'Joan, hate is a very strong word.' You're right, it is, but I use it as an umbrella term, the way mental-health professionals use the word schizophrenia as a catchall for any particular brand of crazy they can't identify. So when I say hate, I don't necessarily mean hate. I could also mean loathe, detest, abhor, dislike, despise or resent. See, isn't that kinder and gentler? If you think this makes you a better person than I am, good. You're the idiot that actually paid for this book."