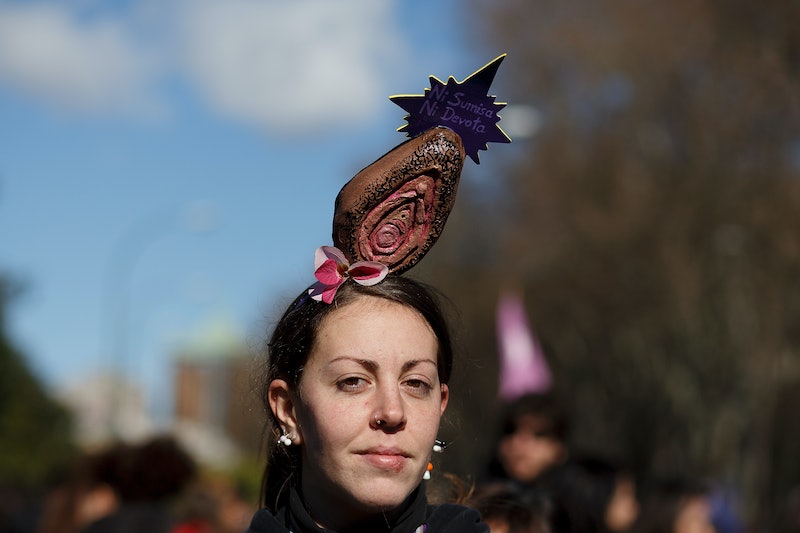 If someone asked you to describe your vagina (asked in a non-creepy way, that is), how would you do it? Recently, Vice asked 60 women about their vaginas, covering everything from descriptions to complaints to nicknames, and got all sorts of responses. The women were all different ages and sexual orientations and came from a variety of countries, so naturally they had plenty of different and interesting things to say.

This most recent round of crowd-sourced opinions from Vice comes shortly after its piece about various attitudes men have toward their penises. The article — as well as the respondents — used "vagina" as a general term for the whole of female genitalia, and revealed that there are differences in the ways men and women feel about their "naughty bits" (newsflash, there's nothing naughty about them). The biggest difference? Vaginas are way harder to describe. (They are also, as it turns out, very difficult to draw).

Women also had their fair share of vagina-related complaints, the biggest one being the size of their labia. Interestingly, teenage boyfriends who said something scarring about their vaginas was also among the women's top five most frequent complaints. Teenage boyfriends really suck, don't they?

When it came for vagina nicknames, though, there doesn't seem to be any consensus. My favorite of the lot? "Fertile Crescent." It's unwieldy, but clever. And one 30-year-old woman from London didn't have a name for her vagina at all, saying “It's a vagina, not a dog."

For all the varying opinions, most women in the survey loved their vaginas. Which is great, because in a culture that is so full of weird, contradictory, and often harmful ideas about women and female sexuality, you'd think that women's relationships with their sexual organs would be correspondingly messed up. And it's really nice to know that isn't the case, at least if these 60 women are at all representative.

To find out more about women's opinions about their vaginas, including their most common questions and lots more nicknames, you can check out the full article here.