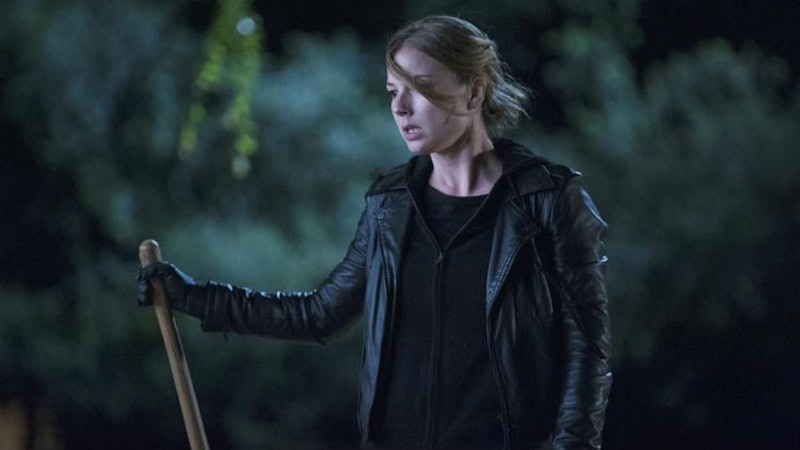 There's trouble brewing in the Hamptons, and Emily Thorne needs to watch her back. The Season 3 finale of Revenge ended with Emily getting everything that she has worked for the past three years. Victoria Grayson was under lock and key in a mental institution, and her equally as nefarious husband, Conrad Grayson, was killed. (Or so we think.) In fact, it was the person who killed Conrad that was the biggest twist of the night — Emily's father, David Clarke, stabbed Conrad to death, proving that he was alive and quite possibly even more adept at vengeance than his daughter. Emily may have gotten everything that she has ever wanted, but she won't be sitting pretty come Season 4. According to a new promo for Season 4 of Revenge , Victoria is out to get Emily — and there's a chance that she might succeed at killing off our protagonist.

Some fans have speculated that the upcoming Season 4 of Revenge may be its last. If it is the case, it seems appropriate that something absolutely insane will happen in the last episode — and there's a big case to make for why it could be Emily's death. There's a quote that is often used on Revenge, which is, "When seeking revenge, dig two graves." That essentially means that there is no way to take out revenge on another person without causing harm to yourself. No one knows that, or embraces that, better than Emily. In her quest for revenge Emily has sacrificed the love of her life, her ability to have children, and quite a few friends along the way. (RIP Amanda.) Emily's plan to take down the Graysons meant giving up everything... and in the final season of Revenge, she might really have to.

Victoria may be ready to take on Emily, but given that we've spent three seasons rooting for Emily, I doubt Victoria could really "win" Emily's game. If Emily does die, I don't think it will be at the hands of Victoria — but I do think it will have to do with Emily's quest for revenge. If the show plans on having Emily sacrifice her own life in the season finale, it will absolutely be for something related to her series-long quest.

The show could put Emily and Victoria in a situation where Emily's death also leads to her ultimate revenge on Victoria. Now that Victoria is revved and ready for revenge, she may come after Emily in a very serious way. Emily may not have tried to kill Victoria outright, but in Victoria's mind, putting her away might as well be the same thing — there's no doubt in my mind that Victoria wouldn't kill Emily if she had the chance. And, maybe, Victoria killing Emily will finally get Emily what she claims to have always wanted. Emily already tried to fake her own death in order to frame Victoria for murder, and it didn't work — what if Emily has to really die in order to get the ultimate revenge?

It would be interesting to see the show take that route. Revenge hasn't exactly glorified vengeance — Emily's sacrificed a ton just to make the Graysons miserable — and this would be one way to show how destructive Emily's quest really is. At the same time, the ending would be satisfying for fans, who have wanted to see Victoria "get what's coming" for a long time. If Victoria kills Emily — and, most importantly, gets caught — she could end up in the same situation that she put David in years before. Emily would die, but she would die knowing that Victoria's life would be miserable, with the Grayson matriarch headed to prison and possibly death row.

While this particular ending of Revenge would be morbid, it is the one that makes sense. After all, can anyone see Emily living a normal life after her quest for revenge ends? I know I can't. It would be tragic to see both of these characters consumed by their own vengeful natures, but one thing's for sure: It would be one hell of an ending.