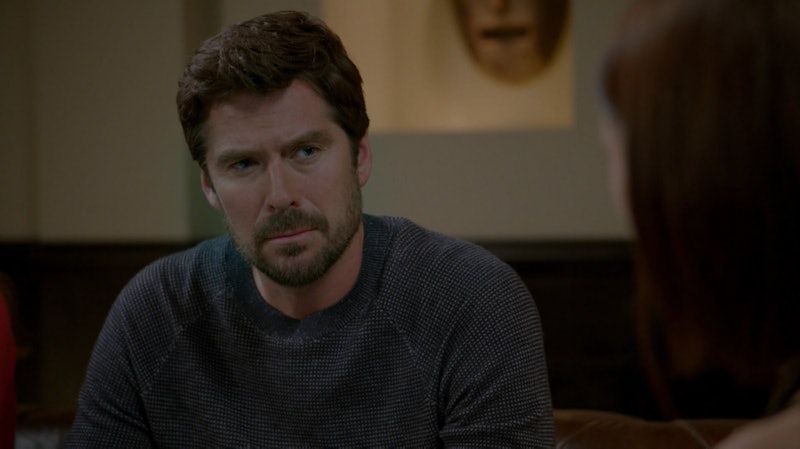 If you told me during the pilot episode of Finding Carter that Carter's father David would slowly identify himself as the worst person on MTV's scripted drama, I wouldn't have believed you. Oh how things have changed. Carter's dear old dad has done nothing but violate trust, break promises, and manipulate the people around him for his own agenda, and frankly, his family might want to watch out. Tuesday's episode, titled "Do the Right Thing," basically proved that David had no idea what doing the right thing actually means, and made him look even more like the creep he absolutely is.

After Carter learns that David lied to her about setting up a meeting with Lori, Carter confronts David, who tells her that he lied so that it would be easier for her to cope with Lori's absence, which Carter reluctantly believes. Unfortunately, Carter also learns that David has written the (pretty harsh) sequel to Losing Linden, the book about Carter's disappearance, the one that she hadn't even okayed until the day before. David, David, David... what the hell are you doing with your life?

From the way lying comes so effortlessly to David, I doubt that the whole situation with the Losing Linden sequel Finding Carter is the only thing he has lied about. I have a theory that David has a serious involvement in Carter's kidnapping, but even if David isn't quite as crazy as that, there are still a hell of a lot of reasons why Carter's family should be much more wary about David in the future. Someone who can lie like that is dangerous — just watch Pretty Little Liars — and with the season finale of Finding Carter coming up, David might mess things up even more for his family with his shady-as-ever behavior. Here are just a few of the reasons why no one should trust David.

Because David is the worst, David smashes the cookies that Grant was bringing to a bake sale out of anger. (Because I guess he didn't have any milk to eat them with...?) Even sadder? Grant lied to his mom about the cookies so that she didn't feel bad about her husband being an asshat. (This kind of stuff is why Grant is the favorite kid.)

He Has A Secret Connection To Lori

David said that his only encounter with Lori was from around the neighborhood, but the more we find out about David, the less and less I believe that. Christine DiStasio previously pointed out on Bustle that in the episode "Throw Momma From the Train" David's phone call with Lori felt a little too familiar. Not only was it weird that David called Lori at all, but the way they spoke to one another almost proved that these two have a history, with Lori telling David not to underestimate her again and that he was never a "good liar." (I agree, but that doesn't stop the entire world from believing his bogus stories.) Any connection between Lori and David would prove that David is a shady guy, but I wouldn't be surprised to find out that David had some role in Carter's kidnapping... possibly to sell books. (Ugh.)

He Knew About Elizabeth's Affair and Did Nothing...

...that is, until he could use it to benefit himself in someway. After Elizabeth and David share an, uh, "intimate" moment, Elizabeth decides to end her affair... which is exactly when David asks for a divorce. That's shady in itself — what kind of twisted mind game are you playing, David? — but it's particularly weird because he then uses the threat of divorce to get something from his own child, in this case, the rights to Finding Carter. The hell is that, David?

He Was Mean To Max in his Book

I mean really. He has met Max, hasn't he? God, David sucks.