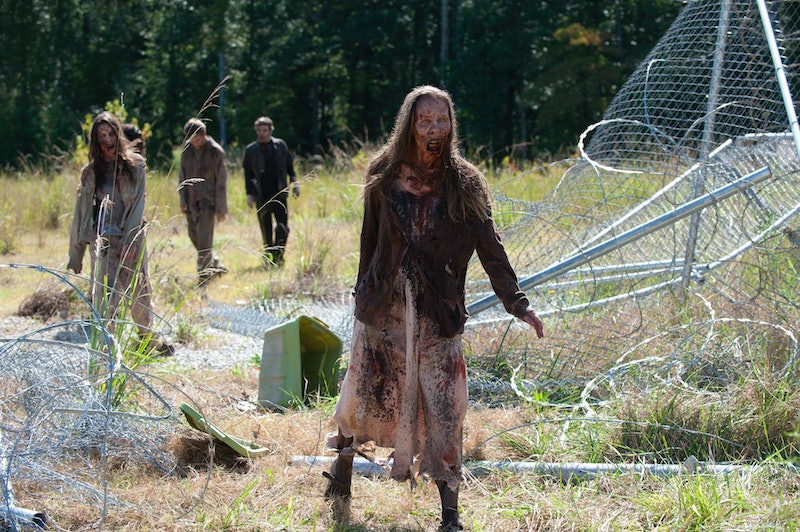 Zombies are gross. They've got flesh hanging off their bodies all willy-nilly and they do the whole, "I eat people on the reg and it's not even an issue" deal. You know what's also gross? Watching zombies, ahem, walkers, be killed by brutally aggressive blows to the head. Thank you, Robert Kirkman, for making sure I get to see that happen on a weekly basis. The Walking Dead Season 5 is crawling with spoilers and rumors so even though it won't premiere until Oct. 12, we can already be sure that the show's gross-out factor will only increase when it returns.

Star Andrew Lincoln told Entertainment Weekly that this season will be borderline abhorrently disgusting. "We're really earning our rating this season," Lincoln says. "There are families that watch it together, but just so it's on the record, guys — it's a grown-up show this season." A grown-up show this season, Mr. Lincoln? Remember when your character ripped a man's throat out with his teeth in last season's finale? I mean, I may be a lowly, naive twenty-something, but it sounds like the show may already be a little grown-up to me. Just sayin'. We all see you gettin' your Damon Salvatore on. We ain't mad at ya.

Here's what we know so far — at the end of Season 4, our group was trapped in a box car thanks to the likes of our not so friendly buddies at Terminus. Fans were left with a million questions, an especially common one being, "Is Rick about to legitimately lose his shit?" And though showrunner Kirkman assures fans in the same Entertainment Weekly interview that those questions will be answered, you shouldn't get too excited.

By minute two or three of our season premier, I think the vast majority of our questions have been answered and five or six more have been presented. So you're very much going to be invested, well-informed, and ready for the ride that we're going to take you on.

Thanks for the heads up, man.

Moreover, one of the show's producers, Jolly Dale, spoke about Season 5's premiere and stated, "The premiere episode is by far the biggest episode that we've ever done. So, getting it all together to make it come off as good as we want has been a huge task, but it's going to be amazing." If Dale is speaking in terms of production value when she says "biggest," I assume she's hinting at the production design of the walkers' makeup and killings, not a Michael Bay-level explosion. That's not really our gritty beloved's style.

Another clue this season will be extra bloody? The recent teaser trailers released features the sounds of knives sharpening in the background.

Did you hear that? Yeah. Sounds like when mamma's prepping for a barbecue. Are those cannibalism rumors I smell? Indeed, as Lightly Buzzed pointed out that the ominous sound supports theories that the citizens of Terminus are in fact meant to emulate the "Hunters" from the TWD comic series. These Hunters were cannibals, so it sounds like blood galore is in our future, mates. If this is true, it would seem like Rick's group just can't win. They're eaten by the Dead and eaten by the living. Apparently a zombapocalyptic world is just a treat for all.

The Hollywood Reporter deemed The Walking Dead "the grossest show on TV." And fans should be pretty OK with that. Blood and guts are part of the job when you're a Dead fan. What we're not OK with, is losing our favorite characters. Rumors have been circulating that Season 5 might take Glenn's life and Carl's eye. If these rumors are true, I have to say, I'm still kind of excited about the upcoming gore. Are you ready for all this intestinal-inspired jelly? Bloody fingers crossed.