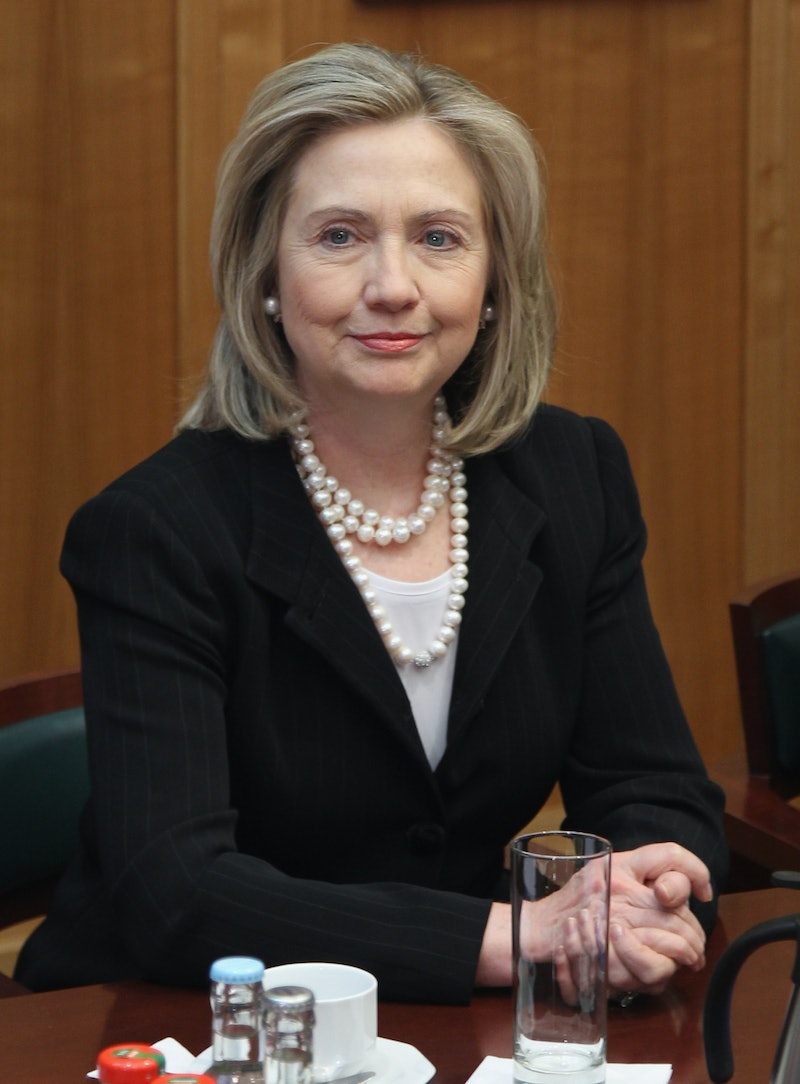 Just like Germans love David Hasselhoff, it would appear that people from Kosovo love the Clintons. They love the Clintons so much that one enterprising individual thought "Hey, I'm gonna open themed-shop honoring the fashions of the ultimate political-slashie Hillary Clinton." So basically, Hillary Clinton-inspired clothing store exists on this Earth. Whaddya think... 2016 Presidential Campaign wardrobe shopping spree?? Even better, Hillary herself has visited this humble mom and pop to purchase a pantsuit. See, dictionary definition of META!!

According to a story published in Yahoo! Travel on Wednesday, the Pristina boutique "Hillary" is dedicated entirely to stuff Hill-dawg would wear. They primarily sell skirt and pantsuits based off of the presidential hopeful and former Secretary of State's aesthetic. If you're thinking this tiny Balkan nation is a tad random for a Hillary-geared store, the Clinton Administration aided Kosovo in casting off the yoke of the Yugoslavian government in the Kosovo War. Store owner Besian Morina told Yahoo, "We respect her name and her personality here. Our clothes are modeled after her own fashion." That's right, Hillary is sorta like Kosovo's Jackie O, or Beyonce.

The shop owners executed their concept so strongly that when the shop's eminent namesake popped by in 2012, she bought herself a snazzy navy getup. Luckily, the owner's proverbial deck was stacked, because the store was designed to be an extension of her closet.

Apparently, everyone else in the surrounding region is just as into Hillary as the shop owner. The store has become a retail destination in the Balkan region, especially since the former senator's visit. They've become so successful, the owner has opened an additional room of inventory. Just in case you had any question in your mind, their best-selling item is a red pantsuit.

In today's world, there are plenty of ways to steal the style of your role models or emulate the fashion of your icons. From Halloween Costumes, to screen-printed tees, to celeb-inspired temporary tattoos. Typically, American sartorial icons are of the pop star/ actress/ entertainer/ heiress persuasion. Hillary, in particular, has a long history of being skewered for her fashion choices. Even if she were considered "fashionable", most female diplomats and dignitaries have been left out of "fashion icon" territory. However, style can lay the foundation for whom young girls are set up to identify as role models. Maybe giving Hillary a bit of style credit would cultivate a desire in more young girls to bust open the boy's club of politics, and maybe even run for president.

Whether or not pantsuits give me poly/wool thigh chafe, it's super gratifying to hear a strong, accomplished female politician like Hillary being lauded for her personality and fashion. You're kinda looking more progressive than America right now, Kosovo. So, I say, bring on the pantsuit rainbow, Hillary!