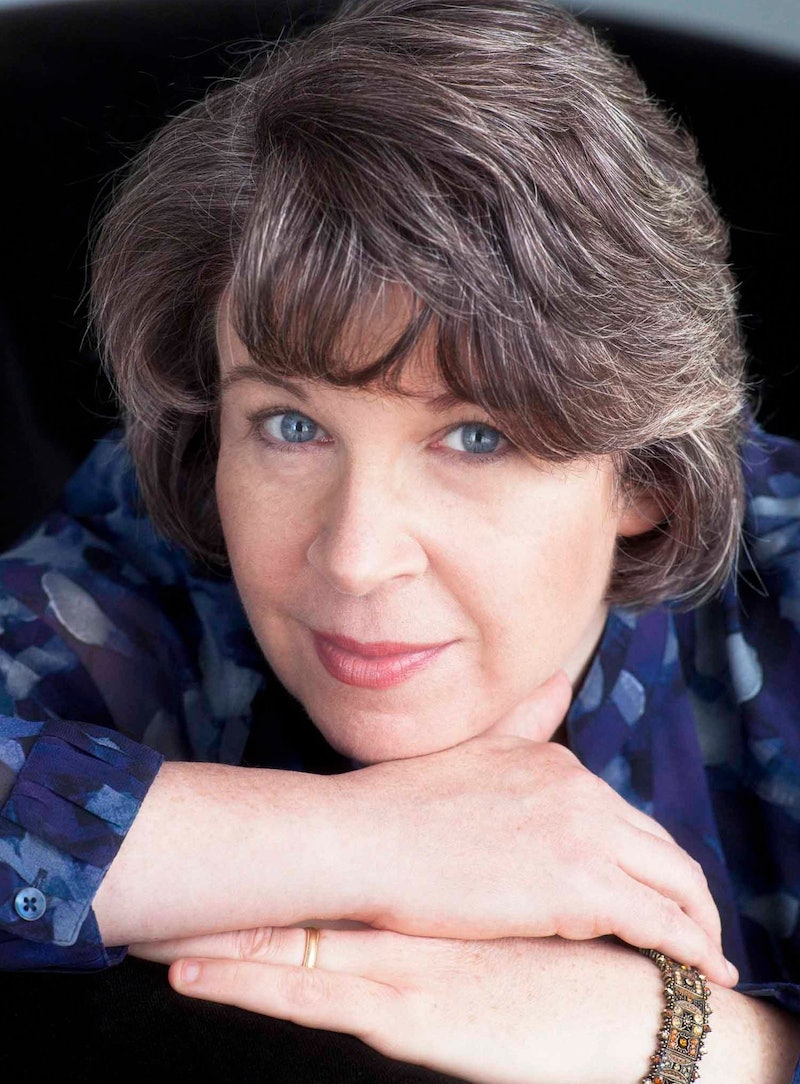 It's no coincidence that the year her youngest son went off to college, Meg Wolitzer decided to write a book about teens.

"There’s no more parental oversight in my life," the author tells me over scrambled eggs at a New York café about her life as an empty nester. "It's over — not only the part of my life where I had oversight of me, but I had oversight of another person. And when you’re in that context, whether you're the overseer or the oversee-d, there’s something safe about it, because you feel that people are taking care of each other."

But in the absence of family nearby, she continues, friendship is what becomes crucial. Says Wolitzer firmly, "You have to look out for one another."

The author explores just that in her tenth novel, Belzhar , out in September. Set at a boarding school for troubled teens, the book details the close bonds formed between adolescents when they're forced to live on their own for the first time. Although Wolitzer has featured teenagers in several of her prior books, including 2013's bestselling The Interestings , Belzhar is her first foray into YA.

"Sometimes, as adults, we look at the drama of adolescence and roll our eyes about it," she says. "But it was interesting to remember the moments of drama that feel real and are real, and you think they won't end, and you think they’re the hugest things in the world ... there's an openness about reading [and writing] about them. It's kind of irresistible."

As is Belzhar. Vivid, compelling, and wholly original, the book is one of Wolitzer's finest works to date. Teens and adults alike will lap it up, especially those all too familiar with the main issue plaguing Jam, the narrator: her fierce, sweeping first love went horribly wrong in the blink of an eye.

"I’m not Jam," Wolitzer says, blunt. "But I remember self-consciousness and I remember isolation ... there’s a line in the book where somebody says to Griffin [a classmate of Jam's], 'It may not be the worst thing in the world, but it’s the worst thing that happened to you,' and that line for me was something I tried to have as a mantra throughout the book, knowing where it was going."

And where it goes is somewhere no reader can predict. Belzhar takes its characters on a totally unique journey, one that blurs the line between fantasy and reality. To say more would be spoiling one of the most original twists in recent YA, but know that it involves school-prescribed journals, a wise teacher, and the words of Sylvia Plath.

"Adolescence is a time when there’s still a thought that a lot of things are possible," explains Wolitzer. "Can I go into another world? Will that boy love me? So [Belzhar] just seems like a more extreme version of the possible."

"But more than that," she continues, "it’s about if you can’t accept what’s happened, the idea of finding a way to make it not have happened. We try to trick ourselves and tell ourselves things that are more tolerable."

Belzhar focuses on just one semester at the boarding school, and it's a transformative few months, to say the least, in the lives of Jam and her classmates, all who came to The Wooden Barn because of trouble dealing with life-changing events.

"It's a complicated grief," Wolitzer says of her protagonist. "This is a girl who feels she’s lost so much, and is finding a way to get it back, even for awhile."

Sadness and tragedy aren't new themes for the author; both The Interestings and an earlier novel, Sleepwalking, dealt with similar concepts.

"I’m in middle age," Wolitzer explains. "You’ve lost important friends. It’s almost impossible to have that not have happened — sometimes a lot earlier than middle age, but for me, I’ve been taking stock of that right now. And [grief] seems worth endlessly looking at."

As, it seems, is friendship, a topic the author's explored in nearly all of her novels to date, most memorably in The Interestings. In that book, the main theme was "the quiet envy you feel for people you love," says Wolitzer, but in Belzhar, the focus is on "seeing our friends as an extension of family, or even as our real family."

"A friend joked that this book is really a mashup of all my other books," she says. "There was a touch of magical realism in The Uncoupling, and we’ve got kids meeting in a place outside their home like in The Interestings, and a teenage sexual awakening like I also did in The Uncoupling. But I feel like writers try to stretch ourselves, always, not only so that it looks good in your biography, but because it’s not interesting to you, otherwise."

And in Belzhar, Wolitzer fills the pages with what she finds interesting: boarding school, romance, and, of course, Sylvia Plath. In 1979, the author won the same Mademoiselle Guest Editor competition that Plath made famous in The Bell Jar (for which Wolitzer's new book is named), and, like the students at Belzhar's Wooden Barn, she found herself immersed in Plath's poetry, fascinated by the ferocity of the troubled writer's work.

"Her journal writing was so intense," she says. "She allowed you to think about what it might be like if some of the bad ways you feel got worse ... there’s such inevitability about it, because you know what happened to the author and you can’t stop it... it was haunting to me."

In Belzhar, Jam and her fellow Special Topics in English classmates spend the semester examining Plath's work, led by the memorable Mrs. Q. The teacher is strange and eccentric in all the best Ms. Frizzle-esque ways, but she's wisely there only to guide her students, not steal our attention.

"I don’t really think I would’ve wanted to read about the teacher very much at 13, 14," Wolitzer says. "I was taking more of a Peanuts approach where the parents are banished, and the one adult here who is supervising has a light touch."

Writing Belzhar, the author constantly worried about balance; unfamiliar with YA writing, she struggled with keeping the book's intensity intact while not condescending to an audience likely younger than her usual readers.

"I started to think of myself as a young reader and channel my earlier self and what I would’ve wanted to read," Wolitzer says. "Certain things immediately appeared: boarding school, shades of mental stuff, emotional problems and, mostly, the idea that what you feel is real because you feel it and that it's worth exploring and considering and inspecting."

Although Belzhar doesn't contain flashbacks, per se, it does reveal parts of its characters' lives prior to their days at the Wooden Barn, the traumatic incidents and powerful emotions that caused them to attend a therapeutic boarding school.

"I’m interested in the shiftings," says Wolitzer. "When you write about people this age, you’re writing about firsts. That’s the reason that we all remember adolescence — you can remember everything at 15 because they had never happened before. Once you start having repeat experiences, it’s hard to remember, and it’s sad that it’s hard to remember, because you think that everything important that happens to you is going to be etched in your mind."

One of the most fascinating elements of Belzhar is that despite its setting, the book is firmly not about school; besides Jam's pivotal English class, little is known about her other subjects, test scores, homework — even the teacher, Mrs. Q, rarely discusses anything other than the Plath poetry her students are reading.

"She thinks they have something to offer, but it’s not that they have to be top students," explains Wolitzer. "It’s the opposite of what it would be like at Exeter or something, where you’d have to do well on tests. It’s all been removed. And it was a relief to write about, because so much of our lives are graded and reviewed. It just doesn’t end. So the idea that they would be free of that — I think we all yearn for that a little bit."

Even Belzhar's characters are not typical of regular YA; from the newly paralyzed girl struggling to acclimate to a non-disabled world to the nervous boy coping with his parents' painful divorce, the book is a happy respite from adolescent tropes and clichés.

"The books I love best think about characters as people who walk the world," the author says, adding, "there’s no such thing as a teenage stock character. The way TV and movies have represented them, it’s the one of each idea ... we often feel when we’re making characters like they're discrete polished stones: the one who’s this way, the one who’s that way. But, in fact, people bleed into each other."

As she wrote Belzhar, Wolitzer, a passionate editor ("revision saves you from the worst things about yourself," she says), worked hard to give her characters lives and personalities natural for teens, but still keep the voice and style familiar to readers of her previous nine books.

"I write a little differently than I once did," she says. "I find that the characters come forward like volunteers to be emissaries of the ideas, and with a little luck, if things are going well, they become inflated with their selves."

Delving into YA, Wolitzer spoke to other authors of the genre, and, at the suggestion of her son, began reading its books. Looking for Alaska, in particular, was a major find, the first book that convinced her of the power of teenage lit.

"I didn’t even know what it was. I hadn’t even heard of John Green at the time," the author says. "But one thing that struck me about it was the intensity of the feelings, the sophistication of the book. It gave me a window into my kid."

Now, writing for teens, she tries "to think about that combination of the book I would’ve wanted to find on the shelf then, with what really interests me as a writer now."

Next on the author's plate is a novel for adults, still in its early stages. It's about "power," she says, although she adds that it's too soon to know for sure where it'll go. After that, there's planning to do for the upcoming TV series of The Interestings ("we'll see what happens with that," she says wryly), and, perhaps, prep for a movie/TV version of Belzhar, a novel practically begging for adaptation. Still, don't expect her to write it; after helping to craft the scripts for the films of This is My Life and Surrender Dorothy , Wolitzer has learned that the screenwriting world just isn't for her.

"I really like the interiority of novels," she says. "I’m a fiction [book] writer through and through."

It may be Hollywood's loss, but for the author's fans, her devotion to novels is far from a flaw. As long as Wolitzer keeps writing books, we'll read them — and luckily, it looks like she has no plans to stop anytime soon.

"I don’t know what else to do but write," she says. "It's the way that I filter the world."