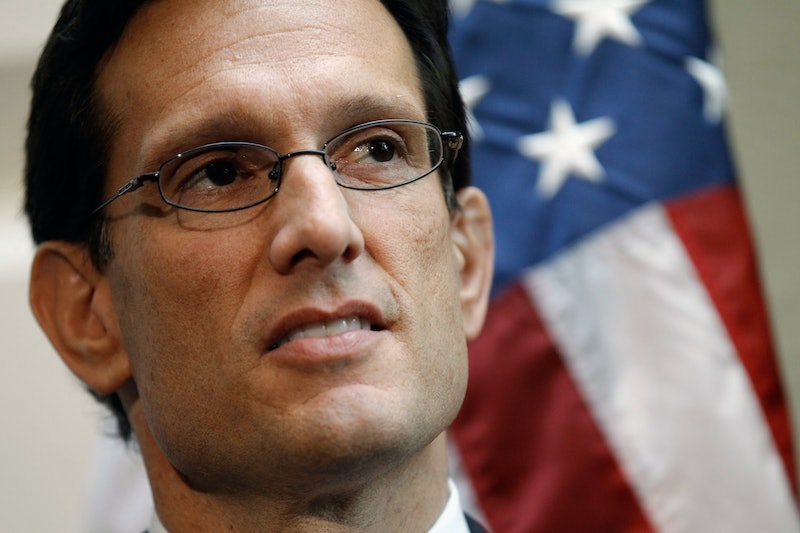 He may have spent his career rising up the ranks in politics, but now he's all business. Former U.S. House Majority Leader Eric Cantor is now vice chairman of investment bank Moelis & Co., the firm announced on Tuesday. Cantor, who lost the Virginia primary election in June in one of the biggest political upsets in recent history, will advise the firm's corporate clients on major deals. And judging by Cantor's steady rise in Congress, he will do just fine on Wall Street.

According to its site, Moelis "provides innovative strategic advice and solutions to a diverse client base, including corporations, governments, and financial sponsors." Cantor will help the boutique firm compete for business, advise clients on takeovers, mergers, and acquisitions, and open a new office in Washington. While Cantor will remain based in Virginia, he'll have an office at the company's New York City headquarters.

Eric has proven himself to be a pro-business advocate and one who will enhance our boardroom discussions with CEOs and senior management as we help them navigate their most important strategic decisions.

Throughout his political career, Cantor has always maintained close relationships with financial corporations. According to campaign data, securities and investment businesses donated $1.4 million to Cantor's reelection bid during the primary cycle in 2013 and 2014 — more than any other industry. Though his experience in Congress is certainly invaluable, Moelis is not hiring Cantor for his political flair.

"I have no need for a political figurehead," Moelis told the Wall Street Journal. "What I want is a partner."

According to the Journal, Cantor and Moelis have been friends for more than three years. At the beginning of July, the two brunched together along with their wives and started talking about Cantor's career and next steps. It was then that a lightbulb went off for Moelis, who asked Cantor to join his firm.

Cantor, whose annual salary at Moelis will reportedly be $400,000, will also be joining as a board member.

In June, Cantor, the incumbent House Majority Leader at the time, lost the Virginia primary election by a large percentage to an unknown economics professor, Dave Brat, with Tea Party backing. Not only did it shock everyone in Washington, but it also led to Cantor's resignation as House majority leader in July and from Congress in August.

If he hadn't taken the position at Moelis, here are a few jobs we can see Cantor doing: