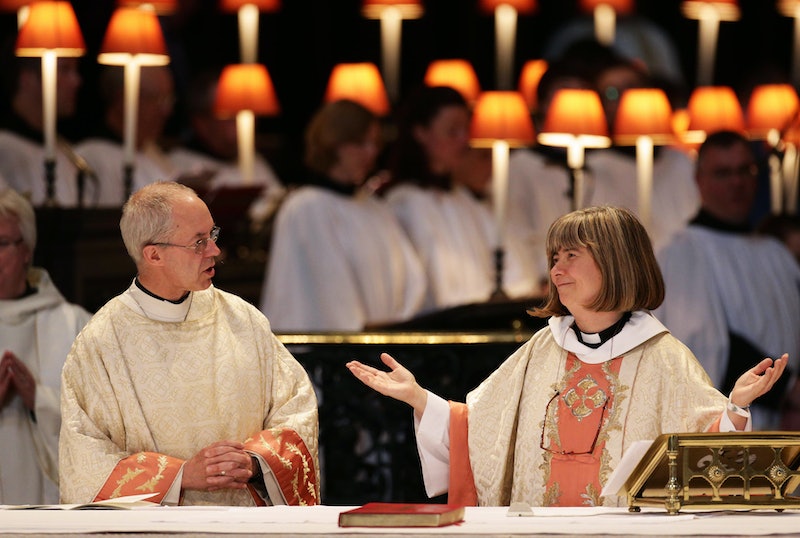 When it comes to gender equality, there's one ladder that women can't seem to climb — the one to the altar. For some Christian denominations, including Catholicism, that proverbial ladder is nonexistent, thanks to centuries-old doctrine; for others, women pastors are beginning to get their due on the altar. According to the Religion News Service, women pastors now lead three major Christian churches in New York, Washington, D.C. and Chicago, a landmark moment that could potentially open up the altar for more women pastors — and their voices.

The three women pastors who were recently appointed to their leadership positions are the Rev. Shannon Johnson Kershner, the first woman to become the sole senior pastor at Chicago’s Fourth Presbyterian Church; the Rev. Amy Butler of Riverside Church, an interdenominational Christian church, in New York City; and the Rev. Ginger Gaines-Cirelli of the Foundry United Methodist Church in Washington, D.C.

What's conflicting about the attention given to these three women pastors and their congregation is that it's not like there aren't women clamoring to become pastors. After all, it has been almost 40 years since the Episcopal Church in the United States starting ordaining women, and 20 years since the ordination of women bishops.

According to the Episcopal Church, there are roughly 4,000 women priests and bishops serving in the United States, accounting for 40 percent of ordinations to the priesthood. The Church of England — where women are being ordained as priests at roughly the same rate as men — finally came around to the idea of women bishops in June.

In fact, many Christian denominations have seen an increasing number of women pastors in churches across the United States. A 2009 report from the Barna Group found that the number of women serving as senior pastors at Protestant churches has doubled since 1990. The United Methodist Church alone had more than 10,300 active and retired women clergy in 2012, and a survey conducted at the time revealed that women clergy serving local congregations increased by 30 percent over the last 20 years.

But that same survey also highlights the struggles women clergy continue to face as they hit the so-called "stained-glass ceiling." According to the UMC, women clergy have had historically low retention rates, as they are more likely to leave their congregations because of — you guessed it — lack of support from "the hierarchical system." Because of the lack of support from higher-ups, women clergy are more likely than men to leave their congregations to seek out work in other — typically lower-paying — ministries.

The three women pastors who are now leading congregations in America's largest cities can relate. They all agreed that it was — and still is — difficult for women pastors to serve when their own congregations don't even see them as clergy in the first place. The Rev. Ginger Gaines-Cirelli told the Religion News Service that at her first church, the comment she most often received was: "I was so worried that we were getting a woman, but I think that you’re going to be just fine."

Rev. Amy Butler also recalled several stories of sexism, including a time when an emergency room security guard wouldn't let her visit a sick patient, convinced that she was just the patient's girlfriend. To convince the guard, Butler told Religion News Service she had to show him her picture on her church's official website.

And Then There's The Pay Gap

All three women also cited securing equal pay to their (male) predecessors as a major issue, because, like in most professions, women clergy make less than their male counterparts. The most recent study from the Church Law and Tax Report revealed full-time female senior pastors have a $25,000 salary difference than male senior pastors. The difference in the pay gap fluctuates between positions, but it's consistent in clergy roles across the board.

The reasons for the pay gap vary, but it's not uncommon for women clergy to get stuck in entry-level roles — not unlike women in the secular world — as their male colleagues move up. After all, though the 2009 Barna report found that the number of senior women pastors in America doubled over the last 20 years, the number is still pitifully low — as of 2009, just 10 percent of senior pastors were women. This is why some women clergy are skeptical about celebrating the rise of Butler, Gaines-Cirelli and Kershner leading churches in three major cities. For some, it seems like the sign of bad times, not good ones.

"Are women coming into leadership only as the institutions are collapsing?" scholar Scholar Diana Butler Bass asked Religion News Service. "It’s a kind of a double-edged sword."

Still, when you factor in the pay gap, low retention rates, stigma and overall systemic sexism of these Christian denominations, having women lead visible congregations in three populous cities is a victory in the end. Women pastors may not have obliterated the stained-glass ceiling just yet, but their numbers are continuing to rise — and maybe a little bit of divine intervention will help.