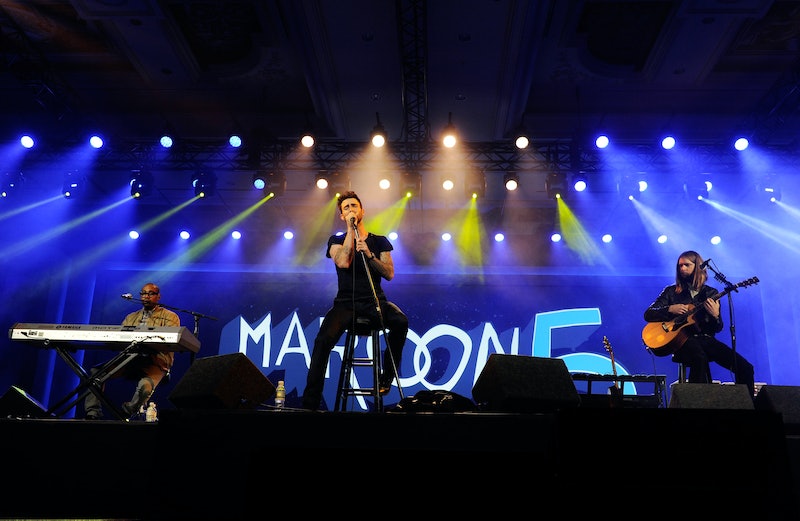 Ah, Maroon 5’s latest album V is finally upon us, in all of its sexypants Top 40 glory. Though we’ve all come to expect a certain standard of raunchy pop tunes and your mom’s guilty pleasure ballads, Maroon 5 still have a few surprises up their sleeves (if Adam Levine is actually ever wearing any). On V, it’s the cover of Marcy Playground’s 1997 hit “Sex and Candy” that stands out amongst the rest of the album. I never would have guessed Maroon 5 would be the right band to ressurrect the one hit wonder, but they sure did in a very, very slick way.

Perhaps what I like most about the song is it helps Maroon 5 sound a lot less like Maroon 5. Over the years, fans have been delivered what they’ve always liked from Levine and Co. without too much fluctuation. “Sex and Candy” actually made my ears perk up and really listen. I didn’t roll my eyes and think “Oh no, this is going to be played until its unbearable.” Instead, I thought, “Hey, wait, this is the same band who wrote ‘Moves like Jagger?’”.

The track is moody, downbeat, slow and sexy. It also doesn’t sound overly-produced. This has a genuine soul groove to it. Covering well-loved songs is a tricky feat. You’ve got to add your own flare without destroying the original. It’s especially difficult when it comes to a one-hit wonder, since its the only song in an artist’s catalogue that was their entire legacy. I tip my hat to you, Maroon 5 for doing a fine job. Let’s see how it ranks amongst some of the best and worst one-hit wonder covers:

No seriously, it's Maroon 5.

It went from bad to worse when they invited the guy from Fall Out Boy along for the ride. Just listen to Jermaine Stewart's "We Don't Have to Take Our Clothes Off" and feel better about your music choices.

Best: Kiesza, "What is Love"

This is so NOT A Night at the Roxbury.

Oh heal my aching 90's heart! This should have never ever happened to "Lovefool."

This is a real homage to the original, with just a few modern updates. Ultimately very, very listenable.

Worst: Bowling For Soup, "Melt With You"

This song has multiple covers from the pop punk world, including Sugarcult and Saves the Day. There must be something about its wistful lyrics that struck a chord with the Warped Tour favorites...and Bowling For Soup was the worst of 'em. They made a beautiful song sound awful. Just so very awful. I'm sorry Modern Romance, I really am.

Another sign of a great cover is when artists really love the piece they are remaking. They Might be Giants clearly love "Tubthumping," with their big giant hearts.

WHY POP PUNK!? WHY MUST YOU CONTINUE TO DESTROY SONGS THAT WERE PERFECT!?

How can you re-interpret one of the greatest karaoke tracks and one of the absolute best songs of the 80's in a way that's as beautiful as it is new? Just like this.

...And now all of these songs will be stuck in your head for weeks to come!