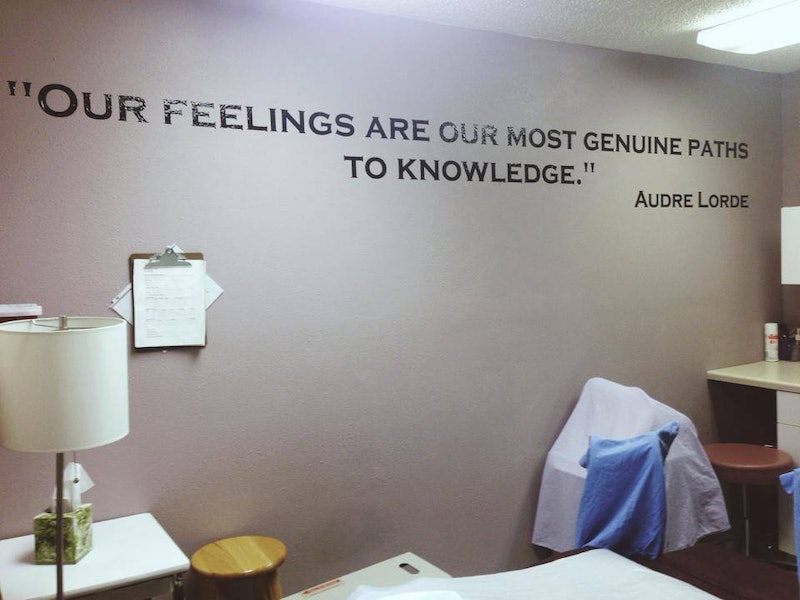 When Whole Woman's Health closed in March, the women living in the Rio Grande Valley region of Texas were left without an abortion clinic. For the last six months, women who needed to terminate a pregnancy had to either travel more than 200 miles north to San Antonio, or cross into Mexico for an illegal procedure — yes, in 2014. That will change this week when Whole Woman's Health reopens its McAllen abortion clinic following a ruling by a U.S. district judge striking down part of an onerous law that forced the clinic — and nearly two dozen others — to shut its doors in the first place.

"It feels surreal," said Amy Hagstrom Miller, CEO of Whole Woman's Health, which operated six abortion clinics in Texas before the controversial anti-abortion law was enacted last fall. Known as HB2 and made famous by state Sen. Wendy Davis' filibuster, the law is a package of regulations that target abortion providers, including a requirement that doctors must have admitting privileges at a local hospital, and a mandate that abortions are performed only in ambulatory surgical centers. Before being blocked by a district judge, the latter requirement was going to be enacted Sept. 1; the admitting privileges provision is already in effect.

Whole Woman's Health in McAllen, a fairly large city located at the southernmost tip of Texas, couldn't comply with either requirement. Miller closed the clinic, which performed between 40 and 45 abortions each week, in March. She later closed Whole Woman's Health clinics in Austin and Beaumont, but was able to keep open a clinic in Fort Worth and two clinics in San Antonio — one of which was already an ambulatory surgical center.

The McAllen clinic should be back in business by this weekend, Miller said Wednesday in a teleconference. In fact, she was already taking appointments:

We are here to say clearly and proudly that politicians’ efforts to close our doors have not swayed us, have not discouraged us, and have not subdued us. We are more than resilient in the face of these threats. We are stronger and more determined than ever.

The closure of the McAllen clinic had a devastating impact on the Rio Grande Valley, a vast, rural region that already had little access to affordable reproductive health care. Low-income women, working mothers and women of color were disproportionately affected. "So many of those groups fall outside of the population covered by health insurance," Miller said.

Miller added that in general, the Rio Grande Valley has higher poverty rates than the rest of the state. After Whole Woman's Health closed, poor working women who needed abortions had to wait longer, get time off work to make the 500-mile round trip north, and secure childcare for their young children. "Very few [women] can actually overcome those barriers to make it to San Antonio," she said.

Whole Woman's Health employs a full-time staff member who raises funds to help women from the region make the long and expensive trip, but Miller said a majority of women "have been left behind."

In a surprise decision last Friday, U.S. District Judge Lee Yeakel struck down the ambulatory surgical center requirement of HB2, just days before dozens of clinics across Texas would close their doors. According to a report from Kaiser Health News, an estimated six clinics would have remained open come Sept. 1.

Yeakel called the requirement a burden on women, particularly those living in the Rio Grande Valley, writing in his 21-page decision:

The court concludes that the act’s ambulatory-surgical-center requirement … creates a brutally effective system of abortion regulation that reduces access to abortion clinics thereby creating a statewide burden for substantial numbers of Texas women. … A woman with means, the freedom and ability to travel, and the desire to obtain an abortion, will always be able to obtain one, in Texas or elsewhere. However, Roe’s essential holding guarantees to all women, not just those of means, the right to a previability abortion.

There's no doubt that Yeakel's decision was a huge win for reproductive rights in Texas. Without his ruling, Whole Woman's Health in McAllen wouldn't be reopening — in fact, Miller would have been forced to close her Fort Worth clinic and one San Antonio clinic this week.

Yet there is a chance of another closure in the near future. Following the district judge's decision, Texas Attorney General Greg Abbott filed an emergency request with the 5th Circuit to enforce the ambulatory surgical center requirement. The appellate court rejected his emergency request, temporarily letting Yeakel's decision stand. A hearing has been scheduled for Sept. 12 — once again putting the fate of the state's abortion clinics in the hands of the court.

In the time being, Whole Woman's Health will be serving patients this Saturday. "We are more than resilient in the face of these threats," Miller said.