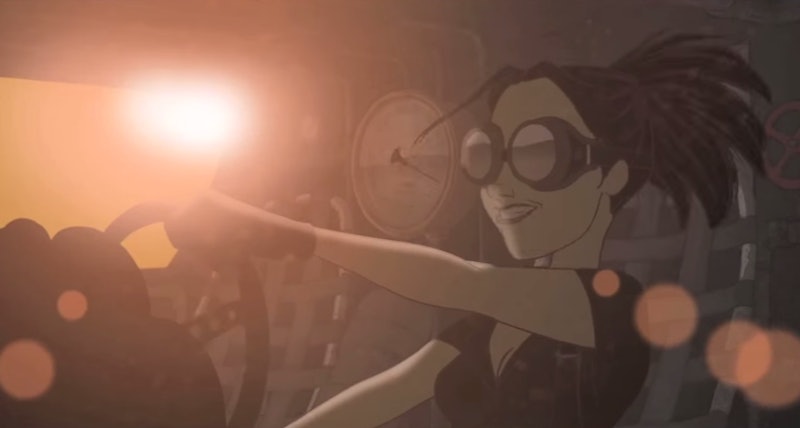 Right off the bat, I cannot stress enough how important this project has the potential to be. According to The Wrap, some veteran Disney animators are working on Hullabaloo now, a 2D cartoon that follows badass heroines Veronica and Jules as they use everything from science to engineering to beat the bad guys and save Veronica's father. Right now, it's just a short — but considering that science and engineering aren't generally plot points in cartoons marketed to young girls, this project going mainstream and becoming a real feature film could make a real difference in inspiring young girls to pursue the sciences instead of being discouraged as has happened in the past.

Hullabaloo is being funded by an Indiegogo campaign, and managed to raise it's $80,000 goal in just five days — right now, in fact, they're at $118,185 total (and counting), which gives them not only enough money to produce a second short, but also perhaps a feature film. Behind the project are a group of animators who have worked on a variety of projects of Disney, including The Lion King, Aladdin, and Tarzan.

It's no secret that, in the past, girls have been discouraged from pursuing male-dominated fields in science such as engineering and computer engineering — women are told from a young age that they're just "not as good" in science and maths than the boys are. This is bullshit (even engineers say so), so it's amazing to see a project actually attempting to turn that myth upside down and create a heroine girls can look up to that actually makes science not only fun, but adventurous and cool. That's what being a scientist is all about, after all: Discovery, adventure, and learning. These are things kids should be taught to get excited about, and that's why Hullabaloo can be so important.

Apparently, the story follows Veronica as she becomes "a goggled crusader who uses wits and science to combat evil and oppose the nefarious conspiracy that has taken her father," and since "the film's two protagonists are both young women and both scientists who use their intellect, wits, and courage to fight greed and corruption," it aims to create "positive role models for girls of all ages and encourage them to get excited about science, engineering, and sci-fi."

To support the project, head over to its Indiegogo page here. You can also check out an introductory video that gives a sneak peek of Veronica and Jules in action, being their badass selves, below.