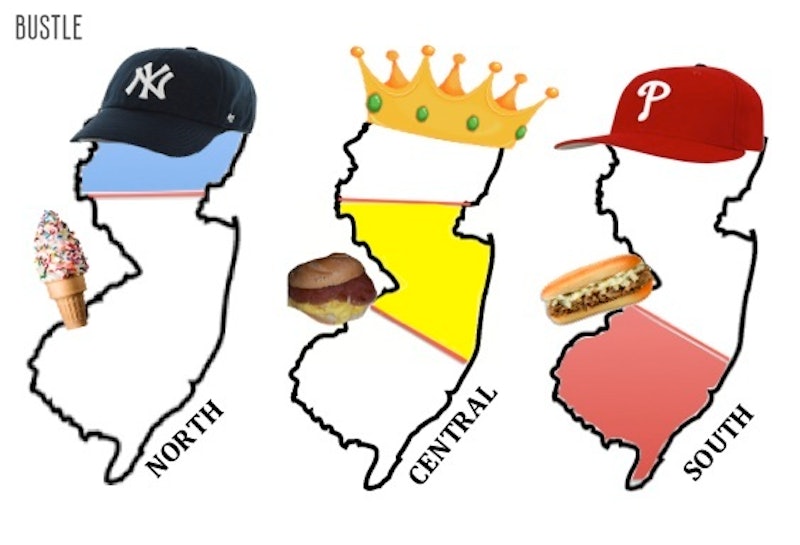 Let's get the obvious out of the way first: Central Jersey is the best part of New Jersey. Yeah, I said it. Now, for those of you not from here, let me explain why. If you're not a resident of the Garden State, you may be unaware of the rivalry between North and South Jersey. They're practically two different states. (OK, not quite. But some would swear by it!) Let's break down the differences.

North Jerseyans refer to New York City as "the city," root for the Yankees (or Mets), and call the rainbow-colored sugary things on top of ice cream "sprinkles." South Jerseyans consider Philadelphia their city, cheer for the Phillies, and those ice cream toppings? They call them "jimmies."

Nestled between these two bickering areas is good ol' Central Jersey, where we get to decide these things for ourselves. It's the best of both worlds, as my friend Hannah Montana would say. As someone who not only grew up here, but also attended college here (woo, TCNJ!), I can confirm it's the best part of the state.

If you're from here, you know what I'm talking about. Here are 25 reasons Central Jersey = the best Jersey.

We're Home To The Best Amusement Park In The Country

This isn't even hyperbole. Six Flags Great Adventure is rated the best amusement park in the country.

Call it what you want (this is another big NJ debate), but either way, it's delicious. This breakfast meat was invented in Trenton.

We Have the Best Shopping

Jersey is known for two things: malls and diners. Over in Central Jersey, we have no shortage of shopping options. There's the Woodbridge Mall, Bridgewater Mall, Menlo Park Mall, Freehold Raceway Mall, and more.

And The State's Top Colleges

Central Jersey is home to some of the state's top-ranked colleges. There's Princeton, Rutgers, Monmouth University, Rider University, and my personal fave, the College of New Jersey.

The First Lady attended Princeton, along with plenty of other famous names. From F. Scott Fitzgerald to Toni Morrison, lots of greats went to college in Central Jersey.

We're Home To The State Capital

Bon Jovi And Bruce Springsteen Got Their Starts Playing Here

This part of the state is home to the Stone Pony, where Bruce Springsteen and Bon Jovi first played. There's also PNC Bank Arts Center, the Starland Ballroom, and more.

If you're like me, you may curse NJ Transit on your daily commute, but be glad it exists deep down. There are so many ways to travel in the state and lots of the major stations are located in Central Jersey.

Which Means We're Just Train Ride Away From NYC ...

Want to take a trip to New York City? No worries, just hop on the train.

... And Just As Close To Philly

Feel like eating a cheesesteak? The trek to Philly isn't far at all. In Central Jersey, you're equidistant from two of the best cities.

Here, You Can Relax On The Beach

It wouldn't be New Jersey without the shore. Options include Monmouth and Asbury Park beaches.

... Without All The Tourists

Fear not, the beaches in this area aren't super touristy.

You Can Also Go To The Racetracks

If you're into horse racing, there's the Freehold Raceway, which is the oldest track in the country. There's also the Monmouth Park Racetrack.

Or The Apple Orchard

Some of the best apples come from this area, including Terhune Orchards in Mercer County.

We've Got The Raritan River

Central Jersey is home to the Raritan River and the D&R Canal, which connects to the Delaware River. Not only is it pretty to look at, but it's great for fishing, boating, and rowing.

And One Beautiful Sculpture Garden

The Grounds for Sculpture is an awesome sculpture garden located in Hamilton. There's so much to look at! With statues and peacocks, it's worth a day trip.

We Make The Best Sandwiches

Rutgers Grease Trucks made our list for some of the best late night college food. It's everything you could ever want on a sandwich — mozzarella sticks, fries, chicken fingers — and it all started in New Brunswick.

We Have Great Minor League Baseball

If you're a baseball fan and don't feel like leaving the state, you can catch the Somerset Patriots play in Bridgewater, or Trenton Thunder in Trenton.

And You Can Cheer For Rutgers' Football Team

We Have The Best Cupcakes

In Princeton has one of the greatest cupcake places: House of Cupcakes. If you don't believe me, they won Food Network's Cupcake Wars. Their brownie cupcake is amazing!

And The Best Diners

My personal favorite is the Sunset Diner on Route 22. But really, any diner is great. From the Ewing Diner to the Fountainbleu Diner, there are plenty of places where you can eat breakfast food 24/7.

Yup, Edison township is named after the famous inventor, who once resided in the area. So you can pretty much thank Central Jersey for the light bulbs shining above your head right now.

Best Of All? This Is Where Jon Stewart Grew Up

The Daily Show host may have been born in NYC, but he grew up and attended high school in Lawrenceville.

Not To Mention Junot Díaz

Are you a fan of The Brief Wondrous Life of Oscar Wao ? Well, the author went to high school in Middlesex County — specifically, the Old Bridge area.

Yup. Here In Central Jersey, We Have the Best of Both Worlds

Central Jerseyans enjoy the perks of the northern and southern parts of the state. We can cheer on the Yankees one minute, root for the Eagles the next. All while eating a Taylor Ham sandwich for breakfast and a hoagie for lunch. Oh, and if we want to call our sprinkles "jimmies," then we can!

And We Wouldn't Have It Any Other Way