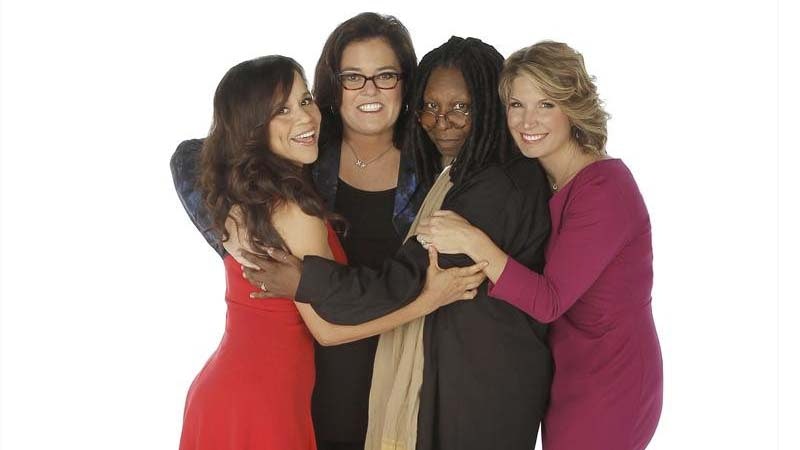 Actress, writer, choreographer, activist, and all-around badass Rosie Perez joins The View on September 15, making her debut as a full-time panel member alongside fellow new host Nicolle Wallace, returning cohost Whoopi Goldberg, and Rosie O'Donnell, who appeared on the show's 2006 to 2007 season. Though Perez has only guest-hosted the show once before (in February 2014), there is no doubt that she's going to fit in just fine among the highly opinionated ladies of The View. In fact, cohosting the shoutiest show in daytime television might be the role Perez was born to play.

Because though Perez is best known as an Academy Award nominated actress and an Emmy-nominated choreographer, some of her greatest cultural contributions have simply come from her excellent gift for speaking her mind.

Whether the issue at hand is sexism, politics, immigration or child abuse, Perez has never hesitated to tell the truth, be herself, and give a huge middle finger to the idea of avoiding confrontation.

So in honor of what is surely going to be one of the most awesomely opinionated seasons in the show's history, here are eight times when the multitalented Perez showed off her talent for saying whatever the hell she wants.

Perez’s first (and arguably most famous) film role was Tina in Spike Lee’s Do the Right Thing — a role she landed by crashing a “butt” contest Lee was holding at a night club to promote his previous film, School Daze. Perez, appalled by the contest, made fun of it onstage by graphically shaking her butt until she was approached by Lee and a bouncer. But instead of kicking her out, Lee dug her spirit, and hired her to costar in Do the Right Thing days later.

After hours of shooting the dance routine for the opening credits of Do the Right Thing — a sequence that would eventually be considered one of the most iconic opening credit scenes in film history — Perez summoned the cool rage that fueled her unforgettable performance by channeling her irritation at Spike Lee.

As Perez said of shooting the credit sequence during a 25th-anniversary panel discussion about the film:

SHE OWNS HER PAST

Perez has never been ashamed about where she came from — she grew up in a family effected by severe financial duress, spent time in foster care, and has spoken publicly about how she personally benefited from government programs aimed at disadvantaged kids. In her new memoir, Handbook for an Unpredictable Life, Perez writes openly about how she suffered a tumultuous childhood that involved abuse at the hands of a mentally ill mother and other relatives, showing that survivors of abuse aren't broken or doomed to painful adulthoods.

In 2000, Perez — a longtime activist and advocate for Puerto Rican rights — was arrested for disorderly conduct while protesting the U.S. Navy's bombing program on the Puerto Rican island of Vieques. She, predictably and fantastically, did not give a fuck.

Perez has refused to take stereotypical Latina film roles, publicly noting that this is why she didn't work in films as often as she could have. "Hollywood's racist," she told CNN. "I knew something else would come along that I was okay with [after turning down roles]. Sometimes you pay a price by not working as much, but I felt good about myself in the morning."

In an interview with Geraldo Rivera, the politically active Perez called the Bush-era emphasis on abstinence education for teens "just insane," and noted, "It doesn't work."

Perez was one of several New York–based celebrities — including Cynthia Nixon and Alec Baldwin— to make a video supporting marriage equality in New York state in 2010. Perez's video is, of course, hilarious, and includes perhaps my all-time favorite phrasing of the argument for marriage equality: "Where I'm from, we've got this saying — 'whatever creams your Twinkie.'"

We can't wait to see what she says next.