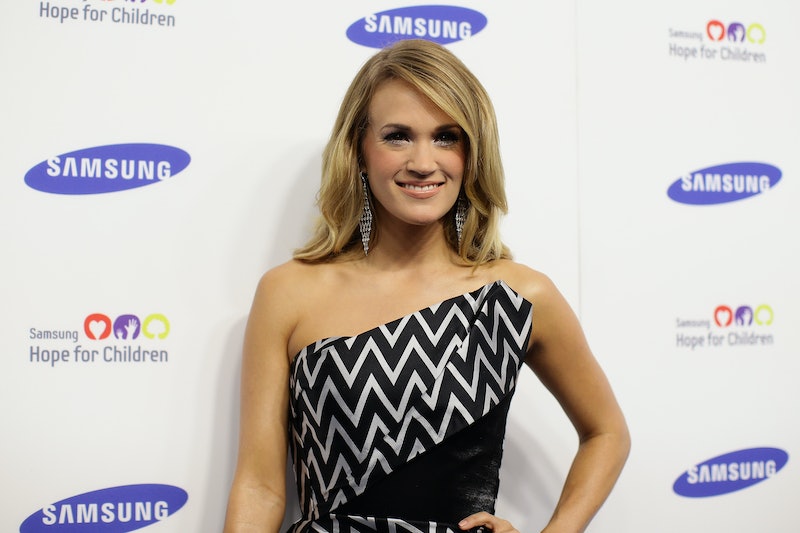 The song in question is "Two Black Cadillacs" and MTV is reporting that Underwood will be the executive producer of a six hour event series or, basically, one short season of a show based on the song. Admittedly, it sounds like it could be a great dramatic series. After all, the song is about a wife and a mistress who discover that the other exists and then decide to kill their mutual lover. The song even has a great chorus that might harken memories of the Pretty Little Liars opening: "Threw a handful of dirt into the deep ground. He’s not the only one who had a secret to hide."

So if TV shows can be based off of songs now, can I make some suggestions for songs I'd love to see turned into a series next? No? Well, I'm doing it anyway.

The entire storyline of this song just sounds promising. Underwood and Lambert star as two women who meet up on a road trip and get up to no good. Thelma and Louise level no good. Yes, please. Now please. PLEASE.

"Enchanted" is one of Swift's most underrated songs, but like her first mainstream smash hit "Love Story" it gives you images of princess gowns and fancy balls. Period pieces like Reign and Game of Thrones are doing incredibly well on television right now and an enamored princess waltzing alone around their room, heart pounding from having met the perfect guy, already has the potential to go horribly, horrible wrong. Especially with a lyric like "Please don't have nobody waitin' on you."

It's quite possible that I just haven't taken "Bang Bang" off repeat yet, but this song makes me imagine a Charlie's Angels-esque television show in which three very bad girls come together to at least try and do some very good things. Granted, that idea was already tried and failed in the Charlie's Angels revival, but I think that's just because the time of tough ladies taking orders from a male voice in a two way radio box is over. It's about time we pave our own paths.

I want you to take a moment to go and look at the trailer for the On the Run Tour. That's pretty much exactly what I imagine a television series based off this song to be like, except longer and not starring Beyoncé. (But please star in it, Beyoncé.)

5. "Story of My Life" by One Direction

Let's just call it now. This is one of the best songs and videos that One Direction has ever done. I mean, "Although I am broken, my heart is untamed, still”? That’s gold. This would be a great set up for one of those re-evaluating life TV shows, where the main character just got let go from a job and kicked out by a significant other and needs to stand on their own legs again somehow.

This song is about Rihanna accidentally murdering someone and having to go on the run to avoid jail time. If that doesn't already sound like the perfect set up to a TV series to you, then you need to listen to the song again.

We need a Gossip Girl for the new generation. One that ended a lot better than the Gossip Girl of the old generation. "Donatella" is the kind of indulgent, rich girl, upper class mocking anthems that make you want to get up and dance and it would be great for another one of those shows that make you wish you lived on the Upper East Side or went to a prep school that allowed you to customize the uniform like that.