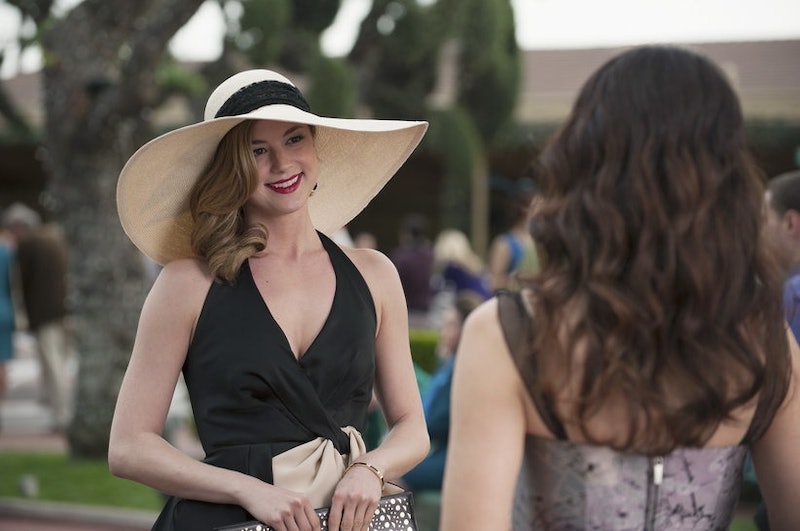 While it might seem too early to already be predicting the series finale of Revenge — after all, Season 4 hasn't even begun — it's totally necessary that we know what we are getting ourselves into before this season commences, right? I don't want to start watching a show like Revenge and not know I'm watching the final season, I'd feel totally cheated! So is this our last season in The Hamptons with Em, Nolan, and now David Clarke?

Well, it's hard to say if it is or not. It seems that a lot of signs point to the show coming to a close. Victoria knows Emily's secret, David Clarke is not dead, and Conrad is now known to be responsible for the flight going down (and also might be dead?), all which lead some viewers to believe that this could be a curtain call season. But, there are also a lot of other plot lines that could unfold into another few seasons, the largest two concepts being Aiden is dead because of Victoria, and David Clarke is not dead. With Aiden killed by Victoria, it seems Emily now has a new sense of revenge, although now that she is known to be Amanda Clarke, she might not be able to galavant around town the same way she was before.

Paul Lee, an executive at ABC, explained that the show might not be going anywhere — this is assuming, that the fans continue to watch it.

The "GREAT idea" that Lee might be referring to could be the reintroduction of David Clarke. If fans respond well to this season's change by bringing him back, there is really no telling where the show could go, and for how long it could continue on for.

In regards to Emily, you might be wondering how can she ruin the Graysons anymore than she already has? Remember when Season 3 came to a close and she had successfully instituted Victoria? That seemed like the final nail in the coffin for getting revenge on her, but for some reason, I just don't think that will be good enough for Emily.

Another plot line that we should expect to see unfold during Season 4, and possibly longer if the show continues, is Emily finding love and peace at the end of it all. With Aiden dead, Daniel Grayson probably not an option, and Jack — could it be that this will finally be the time that Emily and Jack end up together — something that seemed inevitable since episode one of the series?

It's definitely possible, then again, I don't want to jinx anything, because this show is absolutely impossible to predict. Let's hope we still have a few more seasons to figure everything out.